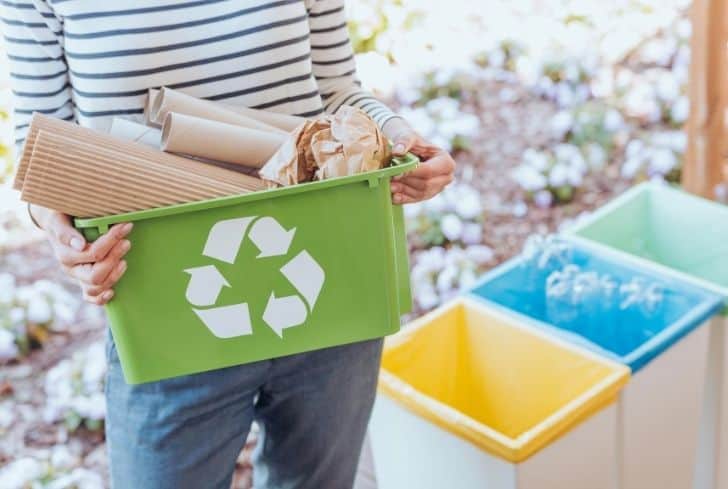 This day and age, there are a lot of people out there that take part in recycling. Some do it because they want to, and others do it because they are pushed to do so. Either way, recycling can really make a difference in the environment, and it is something that more and more people should begin to do. Here are 70+ facts about recycling that you may not have known before.

Fact 1: Recycling is a process to create new items from old and used materials. This helps in reducing energy and potentially useful materials from being wasted.

Fact 2: Recycling is a part of the waste disposal hierarchy – Reduce, Reuse, Recycle.

Fact 4: Variety of raw materials including paper, plastic, metal, glass, electronics and textiles, can be recycled.

Fact 5:  Aluminum can be recycled forever without any loss of quality.

Fact 6: Aluminium cans can actually be recycled and put back onto the shelf at your local grocery store in just about 2 months.

Fact 7: Aluminium cans are probably the most recycled item, at least in the United States. While this is true, you can also recycle other forms of aluminium as well.

Fact 8: Recycling aluminium can help to save a great deal of energy; in fact, enough to run your home television for about three hours!

Fact 9: Most beverage cans are made up of aluminium, even though there are other products that go into it as well.

Fact 10: If you throw away your aluminium cans, they can stay in that can form for up to 500 years or more – so recycling is the way to go.

Fact 11: You can recycle aluminium over and over again, and there is really no limit to it.

Fact 12: There are over 80 billion aluminium cans used each and every year around the world.

Fact 13: Aluminium used to be more valuable than gold many years ago.

Fact 14: The average person has the opportunity to recycle more than 25,000 aluminium cans in their life.

Fact 15:  Aluminum can be recycled using only 5% of the energy used to make the product from new.

Fact 16: Half a million trees have to be cut down just to produce the Sunday newspapers each week.

See also  Is Sellotape Recyclable? (And Is It Compostable or Biodegradable?)

Fact 17: Recycling a single day’s worth of the New York Times could save 75,000 trees or more.

Fact 18: If we recycled all newspapers, we could save over 250 million trees each and every year.

Fact 19: Most people in America use at least seven trees each year, through wood, paper and other types of products that use trees. That is over 2 trillion trees throughout the course of the year when you think about it.

Fact 20: Due to the fact that people aren’t recycling as much as they should, the rainforests are actually getting cut down by about 100 acres a minute.

Fact 21: Each American uses around 680 pounds or 85 million tons of paper each year, and most people just throw it away instead of recycling it for further use.

Fact 23: 2000 pounds of recycled paper can actually help to save 17 trees, over 350 gallons of oil, and a lot of landfill space. That also means less air pollution!

Fact 26:  American businesses use around 21 million tons of paper – with about 750,000 copies made every minute.

Fact 27: Approximately 1 billion trees worth of paper are thrown in the US every year.

Fact 28: 24 trees are cut down to make 1 ton of newspaper. Recycling a stack of newspapers just 3 feet high saves one tree.

Fact 29:  Approximately 100 billion cardboard boxes are produced each year in the US.

Fact 30:  Over 90% of all products shipped in the US are shipped in corrugated boxes, which makes up more than 400 billion square feet of cardboard.

Fact 31:  Around 80% of retailers and grocers recycle cardboard.

Fact 32:  70% of corrugated cardboard is recovered for recycling.

Fact 33:  Recycling cardboard only takes 75% of the energy required to make new cardboard.

Fact 34:  One ton of recycled cardboard saves 46 gallons of oil.

Fact 36: Recycling helps to conserve energy, and as a result, less greenhouse gases are emitted.

Fact 37: Recycling helps to conserve our natural resources like coal, oil and gas.

Fact 38: Recycled paper produces approximately 70% less air pollution than if it was made from raw materials.

Fact 39: Enough plastic is thrown away each year to circle the earth four times.

Fact 40: Americans will use over 2 and a half million plastic bottles every thirty minutes, and most of them are simply thrown away rather than recycled.

Fact 41: Only 23% of disposable water bottles are recycled.

Fact 43: Plastic bags and garbage that are thrown into the ocean have a devastating effect on sea animals.

Fact 44: Plastic bags that are thrown into the ocean can kill over a million sea creatures a year.

Fact 45: Over 25 trillion Styrofoam coffee cups are thrown away each year, just by Americans!

Fact 48: Recycling plastic saves twice as much energy as burning it in an incinerator.

Fact 50: Recycling one ton of plastic bottles saves the equivalent energy usage of a two-person household for one year.

Fact 51: Glass jars can be recycled, but there are many that are just thrown away.

Fact 52:  Glass can be recycled and re-manufactured an infinite amount of times and never wear out.

Fact 53: Glass is 100% recyclable and can be used again and again. Glass recycling is separated into colors because glass retains its color even after recycling.

Fact 55:  A modern glass bottle would take 4,000 years or more to decompose — and even longer if it’s in the landfill.

Fact 57: Over 60% of the trash that ends in the dustbin could be recycled.

Fact 58: Recycling helps to reduce the amount of waste that goes to landfills, and as a result, less harmful emissions like methane gas are released into the earth’s atmosphere.

Fact 60: A modern glass bottle could take over 4000 years to actually decompose, and if it is in the landfill then it will probably take even longer than that.

Fact 61: Most dumps are made up of a third of packaging materials that could be recycled.

See also  Can You Put a Kettle in the Recycle Bin?

Fact 62: Each year, there are organic garbage thrown out that could be composted and recycled to use for fertilizer for the ground rather than pollutants.

Fact 64: The most thrown away products in America include diapers, pens, razor blades, tires and aluminium – all of which can be used to be recycled into other products.

Fact 65: About 11 million tons of textiles end up in US landfills each year — an average of about 70 pounds per person.

Fact 66:  Americans generate an additional 5 million tons of waste throughout the holidays.

Fact 67:  Americans throw away enough trash in an average year to circle the earth 24 times.

Fact 68: The EPA estimates that 75% of the American waste stream is recyclable, but we only recycle about 30% of it. However, 94% of the US population has access to some type of recycling program.

Fact 69: Most people produce 4.4 pounds of trash per day, which results in about 1.5 tons of solid waste per year.

Fact 71: One drip one second from a leaky faucet wastes 540 gallons of water a year.

Fact 73: Electronic waste totals approximately 2% of the waste stream in the US.

As you can see, there is a lot of great information out there about recycling. If you have never considered recycling, or have thought about it and thought that it would really not be worth your while, you may want to think again. It can actually help to save you money in the long run, but more importantly, it is great for the environment.

It doesn’t take too much extra effort on your part, and if more people would do it, then the world would be a much cleaner place to be. It is clear that people need to do their part, especially if they want to work toward a sustainable planet that will be around for many more years to come. It’s also a fact that we aren’t doing enough to take care of the planet, which is why we really need to learn more about recycling.