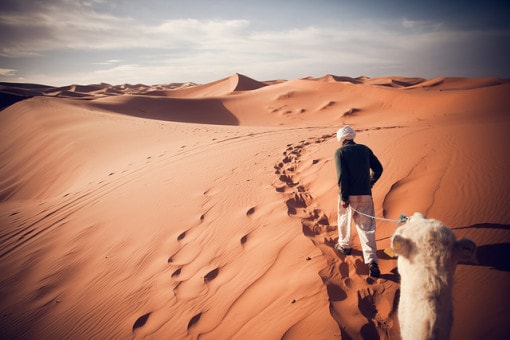 Desert biomes are incredibly interesting to look at. They cover about 20% of the Earth and occur where rainfall is less than 50 cm/year. There are mainly four types of deserts in this biome – hot and dry, semiarid, coastal, and cold. These ecosystems are identified by the fact that they don’t get a lot of precipitation during the year. Only those plants and animals that are able to adapt to the climate and temperature of desert can survive there. Deserts that receive rain as the main form of precipitation are called as hot deserts while those which receive snow as their main form of precipitation are called as cold deserts. Here are some quick and interesting facts about desert biomes.

The desert is natural; when you are out there, you can get in tune with your environment, something you lose when you live in the city.
– Robyn Davidson

As mentioned above, there are four major types of deserts that you may come across when it comes to desert biomes. Here is a quick look at each of them.

Hot and dry deserts are the stereotypical deserts that many of us think about when we’re talking about the word “desert.” Here are some of the main traits that you will notice when you’re exploring a hot and dry desert.

Semiarid deserts are those that we think of in the northwestern part of the United States. There are others located throughout North America, Northern Europe, and Northern Asia. The major types of semiarid desert include the sagebrush of Utah, Montana and Great Basin.

Coastal deserts are one of the most unique deserts that you will find when you’re looking. These deserts can be found in cools to warm areas such as the Nearctic and Neotropical realm. They aren’t very common; the most well known is the Atacama, which is located in South America.

Cold deserts are also incredibly unique when compared to all of the other types of deserts that we’ve looked at here. They occur in the Antarctic, Greenland and the Nearctic realm. The mean temperature in summers ranges from 21 to 26 ° C  and mean winter temperature is between -2 to 4° C. The cold deserts are known to receive snow during the winter and high overall rainfall throughout the winter that averages out to 15 – 26 cm a year. Here are a few quick facts to give you a better idea as to what cold deserts are like.

Desert biomes are a huge part of the world that we live in, so it’s important that we take the time to better understand and explore them. Even if areas don’t seem to fit our definition of a “desert,” it’s still important for us to embrace them and do what we can to protect them as part of our planet.