We need fossil fuels in order to live a normal life. Powering our cars, heating our homes and lighting our streets throughout the night are only a few ways in which we use power that we derive from natural gas, petroleum and coal – the main fossil fuels. We have been gathering these fossil fuels for many years, but we are always trying to find better, more efficient ways of getting as much out of the fossil fuels that naturally exist in and around the world.

Fracking is one method that we are currently using in order to gain access to natural gas and oil (petroleum) buried miles and miles beneath the Earth’s surface. During this process, a huge drill is used to pass through many layers of earth and rock that lie between us as the natural gas. A special water mixture is then pumped directly at the rock miles below in order to release the gas it contains. The mixture – which is primarily water, sand and certain chemicals – are forced into the rock (at extremely high pressures) in order to force the gas out to where we can collect it. The drill can be driven into the earth either vertically or horizontally.

Fracking first began as an experiment in 1947 and has been used commercially for 65 years. It is the process of drilling down into the earth and a mixture of water, sand and chemicals is directed at the rocks at high pressures to fracture the shale rocks to release the natural gas inside. According to this, there are more than 500,000 active natural gas wells in the US. Hydraulic fracking produces several barrels of gas a day, but at the cost of numerous environmental, health and safety hazards. 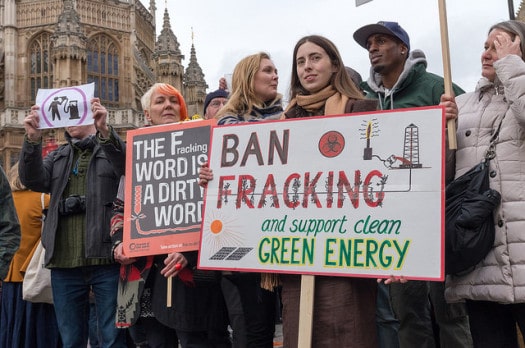 Read here about pros and cons of fracking.

“Hydraulic fracturing (also hydrofracturing, hydrofracking, fracking or fraccing) is a well-stimulation technique in which rock is fractured by a pressurized liquid. The process involves the high-pressure injection of ‘fracking fluid’ (primarily water, containing sand and other proppants suspended with the aid of gelling agents) into a wellbore to create cracks in the deep-rock formations through which natural gas, petroleum, and brine will flow more freely. When the hydraulic pressure is removed from the well, small grains of hydraulic fracturing proppants (either sand or aluminium oxide) hold the fractures open.”

The process of fracking can help us improve access to gas that we have already started to harvest or can help us get to new, previously unknown deposits of natural gas even if they are miles below the surface of the Earth. The term ‘fracking’ comes from a shortening of ‘hydraulic fracturing’ referring to the fracturing of the rock that are broken apart by the high pressured water mix. Unfortunately, however, lots of people are starting to worry that fracking is having a negative impact on the environment.

What is the Process of Fracking?

Once natural gas (also known as ‘shale gas’) has been found, measures can start being taken to set up the fracking process to access the essential fossil fuel, most commonly used for cooking and heating. If the natural gas is not too far below the surface, other extraction methods can be used and may even be preferred.

However, since we are starting to run out of shale gas deposits closer to the surface, we are starting to try and find ways to access the many deposits that exist many thousands of feet into the Earth. Fracking is now one of the preferred methods of extraction because it can get to pockets and deposits of natural gas with relative ease.

If not for fracking, we may start to run out of shale gas even quicker than first predicted. The process of fracking proceeds in a number of steps after the deposits deep inside the Earth have been found:

1. Firstly, a well is created by drilling directly into the earth. Measurements will have already been taking to establish exactly where the natural gas is, and the drill will dig down to this exact level, whether the gas it being drilled out vertically or horizontally. If it is being drilled out horizontally, the drill is turned ninety degrees horizontally and then continues towards the natural deposit. These wells can be dug to many thousands of feet, which means that we can access a lot more natural gas than before, as other natural gas wells have, as yet, not been able to get so deep.

2. Next, the mix of water, various chemicals (although most companies do not actually specify what these chemicals are exactly) and sand is pumped through the well towards the deposit of natural gas. It is pumped at high pressures so that it can break through the rocks containing the gas, allowing it to escape. It can take as much as five million gallons of water for each natural gas well which can be as many as 100 times more than the other extraction methods that have been used before.

3. As the natural gas gets through the rocks that have been broken by the high pressure water mix, it steadily rises up towards the surface. From here, we are able to collect it ready to be processed, refined and then distributed to those who need it.

4. The water that has been pumped into the Earth, however, has to come back out. This waste water (which is also referred to as ‘flowback water’) comes back towards the surface after all the natural gas has been extracted. In some places, this water is then recollected when it reaches the surface.

5. The water that has been used in the process of fracking is then stored in steel tanks to be injected into oil and gas waste wells for a long period of time without harming the environment. Because of the chemicals used added to this water, it cannot simply be returned to the sea or into other waterways.

In U.S., safe hydraulic fracturing is letting them tap vast deposits of oil and natural gas that were locked away in tight rock formations. Hydraulic fracturing will be used in next few decades to access difficult to reach areas for oil and gas. The use of fracking has ensured gas security to U.S. and Canada for another 100 years. It has boosted domestic oil and gas production and have bring down the gas prices. According to U.S. EIA, U.S. is the leading producer of natural gas in the world and because of fracking it could become the leading oil producer in the world by 2015.

How Does Fracking Work?

Why is fracking so effective at getting natural gas out of the ground ready for us to use to heat our homes and cook our food? Unlike previous methods of natural gas extraction, fracking allows us to dig down many hundreds of feet into the ground, which means that we can get access to many more natural deposits of shale gas that have previously been beyond our reach. Fracking is very effective and there are a number of details that explain why it is fast becoming a favored way of extracting natural gas from the ground.

1. Fracking works so effectively and efficiently because drilling into the ground allows us to access natural gas deposits thousands of feet from the surface. This means that we can inject the rocks that contain natural gas with the mixture of water, sand and chemicals (split 90%, 9.5% and 0.5% respectively) directly and at full pressure.

2. Injecting the water mixture at high pressures into the rock is absolutely essential, as it is this that causes the tiny fissures in the rocks. This pressure has to be extremely well controlled otherwise a lot of things could go wrong. Once these fissures have been created, however small they are, they allow the gas to flow smoothly from the natural deposit deep in the ground straight to the surface.

3. The chemicals and sand that are added to the water in order to actually hold open the fissures that are created by the high pressure water. Without these additives, the fissures would very quickly close, trapping the gas once again and make it impossible to access.

4. Fracking takes place along the entire length of the well that has been drilled. This allows us to access as much of the natural gas as possible, making the process a lot more cost effective and efficient. This means that we can get access to even the biggest of natural gas deposits without having to make multiple drill holes in the ground.

5. Fracking is particularly effective at accessing what is referred to as ‘tight gas’. This is the gas that is actually trapped inside shale rock formations and that is therefore a lot more difficult to access with normal shale gas extraction techniques.