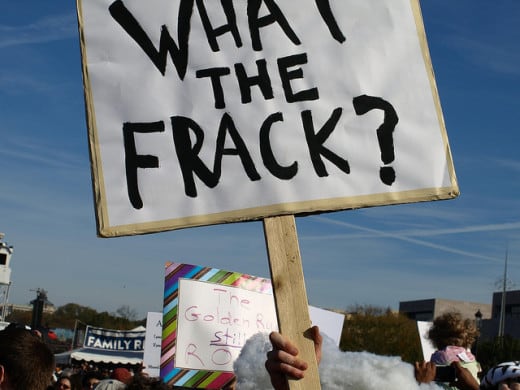 Fracking (the term coming from a shortening of ‘hydraulic fracturing’) is one of the more recent methods of natural gas and oil extraction. It involves drilling down deep into the Earth’s crust where there are deposits of shale gas and oil that the more usual methods of extraction have not usually been able to reach and injecting high pressured water into the rocks that contain the gas or oil. This water, mixed with sand and a special cocktail of chemicals, the ingredients of which fracking companies have not yet released to the public, causes the rocks to break.

The breaks or ‘fissures’ in the rock are then held open with the sand and chemicals that have been added. Through these fissures, the gas or oil then escapes. It slowly makes its way up to the surface where it is collected carefully and stored, ready to be processed and then sent on to be used for heating homes and cooking food, amongst other things. However, recently there have been a lot of arguments against using fracking to get access to the very deepest of the natural deposits of fossil fuels. There are a number of environmental problems that need to be taken into account to really understand the full effects of fracking.

By the time the frackers are done in the other states our water will be worth more than oil.
– Farid Khavari

There are numerous pros of fracking, which is why it has so steadily come to be used for a lot of the extraction of fossil fuels in recent years.

1. Access to More Gas and Oil: Because fracking can reach to depths that other extraction methods cannot, we now have access to many more natural deposits of gas and oil than we ever did before. This means that we have more gas and oil to use for cooking, heating, and powering our cars, for instance.

This is a really important benefit, as many scientists previously thought that we had only a few years left to use fossil fuels before they ran out. This means that we can use fossil fuels for longer which gives us longer to find viable alternatives for when oil, gas, and coal run out.

See also  How Asbestos Gets Into Our Soil, Air and Water, Causing Damage to Humans and Animals?

2. Lower Taxes: A knock-on effect from having access to more gas and oil is the lowering of taxes on essential things like gas and oil. Petroleum for cars as well as gas for cooking will become easier to access and, therefore, cheaper.

3. Self-dependent: Geopolitics – they can be an absolute nightmare. A lot of the international relationships between some of the biggest and most influential countries have to do with who has the most access to fossil fuels. Being able to access more gas and oil in our own countries, however, will give us better peace of mind should other countries start to hoard fossil fuels for themselves, for example.

4. Better Air Quality: Fossil fuels have long been said to be bad for the environment because of the chemicals that they release into the atmosphere. At least, this is true of coal. However, access to more gas may mean that we start to use more gas, and the burning of gas, less carbon dioxide is released into the atmosphere. This means that gas is a much cleaner fossil fuel, and, if more people start to use gas, the quality of air will start to improve.

5. Reduced Dependency on Foreign Oil: Fracking helps countries to explore domestic sources of oil. As the population continues to increase, it makes more sense to look out for alternative sources for oil and gas at home rather than depending on other countries to meet local demand.

6. Plenty of Jobs: The fracking industry has already generated thousands of jobs in the recent past and is expected to generate plenty of jobs in the near future.

However, fracking is not all good and there are a number of very compulsive arguments to stop fracking in favor of focusing on cleaner methods of generating electricity; for instance, solar or wind energy.

1. Less Focus on Renewable Energy Sources: If we are relying on fossil fuels and we have found a way to be able to rely on them for longer, we are going to stop our research into alternative (and cleaner) energy sources. When we thought that the world was running out of fossil fuels, we had really started to look into alternative energy sources such as solar energy, wind energy, and hydropower.

Scientists had even started looking into how to make cars cleaner, trying to make them run on many different things including water and hydrogen. If we have plenty of gas and oil left thanks to the improved method of extraction, the need to find alternative energy sources is drastically reduced.

2. Increased Water Pollution: Although above we said that the general quality of air would be improved if more people used gas as opposed to coal or oil, fracking could actually end up leading to more pollution in general. Because fracking uses so much water (as much as 100 times what other, conventional drilling uses to get to gas and oil deposits), it has been linked to a decrease in the water supplies in and around areas where fracking has taken place.

Linked to this is the concern about the increase in water pollution. Water supplies in areas where fracking has recently taken place have tended to show an increased amount of dangerous chemicals. This is because the water that is used in fracking, although most of it is collected, can seep through the earth and end up in reservoirs, the sea and other bodies of water. From there, it can harm the ecosystem.

3. Increased Number of Droughts: Because fracking, as mentioned above, uses so much more water than other techniques employed to extract fossil fuels from the earth, there has been an increased number of droughts in and around areas in which fracking has taken place.

In addition, some people are starting to have a problem with the idea that half of the country is suffering from natural droughts but that the biggest energy companies are still allowed to use huge amounts of water – that would have otherwise been good for drinking or watering gardens – to get gas that we do not strictly need.

4. Consistent Noise Pollution: As well as an increase in water pollution in areas where fracking is taking place, noise pollution is on the rise. Fracking is a very loud process and goes on for ages. For people living very close to places where fracking is taking place – since it can take place almost anywhere, including areas that are otherwise highly populated – the constant noise of heavy vehicles coming and going for days on end can have a huge impact on daily lives.

Light pollution can be a problem for those who live close to places where fracking is taking place, too, particularly because fracking does not stop, but goes throughout the day and the night.

5. Increased Spread of Toxins: Fracking companies are not yet legally obliged to disclose what sort of chemicals they are putting into their water mix – all we know is that water is being mixed with sand and certain chemicals to make fracking easier and more efficient.

However, because people do not know what sort of chemicals are being used, people living close to places where fracking is taking place cannot protect themselves from specific chemicals. Scientists cannot even begin to start predicting what problems might occur because of the introduction of chemicals into the environment because they do not know what they are dealing with.

6. Nature of Mixture Used: There is no clarity as to what chemicals and sand companies use to gain access to valuable natural gas and oil. The wells underground have an extensive collection of oil and natural gas. It is not known how the mixture is prepared and if the mixture can cause any harm to the health of workers while blasting is done.