At sites filled with waste organic material, bacteria, fungi, protists, and other microorganisms keep on breaking down organic matter to decompose the waste. If such environment is filled with oil spill, some organisms would die while some would survive. Bioremediation works by providing these organisms with different materials like fertilizer, oxygen and other conditions to survive. This would help to break the organic pollutant at a faster rate. In other words, bioremediation can help to clean up oil spills.

“Bioremediation is a waste management technique that involves the use of organisms to remove or neutralize pollutants from a contaminated site.”

According to the EPA,

Bioremediation is a “treatment that uses naturally occurring organisms to break down hazardous substances into less toxic or non toxic substances.” 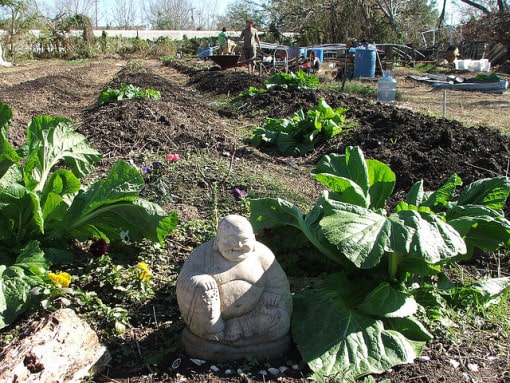 Why Bioremediation is Important?

Bioremediation is important for two reasons.

1. It uses no chemicals – One of the issues with using man-made chemicals in the treatment and removal of contamination is that the chemicals eventually make it into the water supply. There were many chemicals used at the beginning of the waste management era that we now know were very harmful to plant, animal and human life once they reached the water supply.

2. It can allow waste to be recycled – Another major reason that bioremediation is preferred is that once the waste is treated and the contamination neutralized or removed, the waste itself can then be recycled. When chemical remediation types are used, the waste is still contaminated just with a less toxic substance and in general, cannot then enter into the recycle process. Bioremediation allows for more waste to be recycled while chemical methods still create waste that cannot be used and has to be stored somewhere.

What are the 2 classes of Bioremediation used?

There are far more than 9 types of bioremediation, but the following are the most common ways in which it is used.

1. Phytoremediation – use of plants to remove contaminants. The plants are able to draw the contaminants into their structures and hold on to them, effectively removing them from soil or water.

2. Bioventing – blowing air through soil to increase oxygen rates in the waste. This is an effective way to neutralize certain oxygen sensitive metals or chemicals.

3. Bioleaching – removing metals from soil using living organisms. Certain types of organisms are draw to heavy metals and other contaminants and absorb them. One new approach was discovered when fish bones were found to attract and hold heavy metals such as lead and cadmium.

4. Landfarming – turning contaminated soil for aeration and sifting to remove contaminants, or deliberately depleting a soil of nitrogen to remove nitrogen based organisms.

5. Bioreactor – the use of specially designed containers to hold the waste while bioremediation occurs

7. Bioaugmentation – adding microbes and organisms to strengthen the same in waste to allow them to take over and decontaminate the area

8. Rhizofiltration – the use of plants to remove metals in water.

9. Biostimulation – the use of microbes designed to remove contamination applied in a medium to the waste.

Factors Responsible For Microbial Bioremediation to be Effective

The major advantage of the bioremediation methods is that it allows for contamination to be treated, neutralized or removed and then produces a waste product itself that is more easily disposed of. In some cases, there is no need for disposal at all. In the case of the plants used in phytoremediation and rhizofiltration, the plant is able to do something called bioaccumulation. This means is holds onto the contaminant. As the plant is still growing, there is no need to remove and destroy it. In many ways it is similar to having a rechargeable battery. In the case of contaminated waste, it is the plant that keeps growing to allow for more storage of waste. This is a uniquely cost effective solution for contaminated waste.

Below data has been taken from here

Microbial Population: Suitable kinds of organisms that can biodegrade all of the contaminants

Oxygen: Enough to support aerobic biodegradation (about 2% oxygen in the gas phase or 0.4 mg/liter in the soil water)

Water: Soil moisture should be from 50–70% of the water holding capacity of the soil 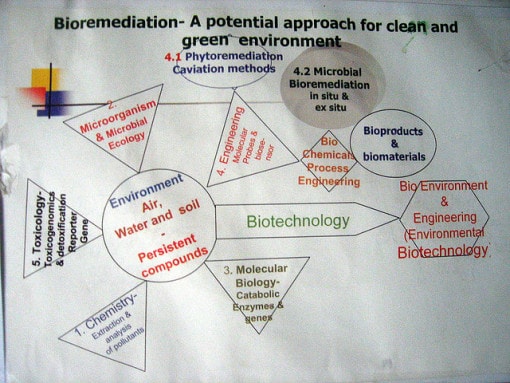 There are some types of contamination that are very difficult to use bioremediation for. The two biggest concerns are:

Both of these are classified as heavy metals and are difficult to remove using microorganisms. As mentioned earlier, a recent discovery about the absorption rate of fish bone has proving successful In fact, bone seems to hold the clue for removing heavy metal contamination. Char is used to remove small amounts of zinc, lead and cadmium; and it is thought that the calcium in the fish bone is what makes it effective.

See also  Are Matches Compostable? (And Are They Recyclable?)

Can you use Bioremediation on Nuclear Waste?

Yes and no. While you can’t apply any microorganism to nuclear waste with any great success, two bioremediation techniques are used to handle nuclear waste.

Part of the conservation efforts by scientists are focusing on the effective use of bioremediation on contaminated waste. Contaminated waste comes from two different causes –

There are many different natural contamination processes that occur as a material or substance breaks down. As it moves through its stages of decomposition, varying levels of toxins may be present. That man is capable of creating an enormous amount of contamination is well known. Yet remediating them with unnatural substances has proven not to be the solution. When waste is bioremediated it can be recycled, or at least, stored in such a way that it causes no further harm to the environment around it. Specialists are constantly looking towards the natural decay and remediation processes to understand how they could be manipulated to help manage man-made waste. This will help prevent further pollution from waste, or the products that treat it. Bioremediation is one of the most cost effective and safe solutions we have now to manage contaminated waste.