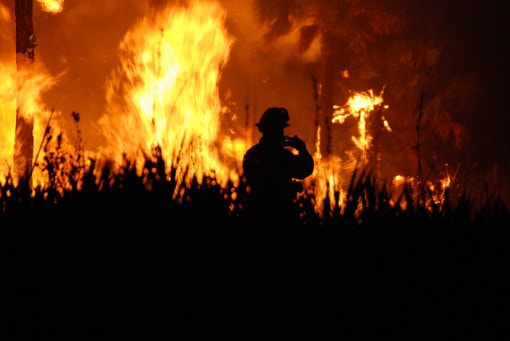 Wildfires or bushfires are blazes that are uncontrolled and fueled by different types of weather, dry underbrush, and wind, which burn land by the acres and take over everything in their paths, in just a few minutes. There are typically about 100,000 wildfires in the United States every year. An average of 72,400 wildfires cleared an average of 7 million acres of U.S. land each year since 2000.

Climate warming from increasing greenhouse gas emissions is forecast to dramatically increase the risk of very large, damaging wildfires over the next several decades, a new NOAA-funded study says. Here is an interesting piece of article that says that the risk of large U.S. wildfires is predicted by mid-century.

“A wildfire, wildland fire or rural fire is an uncontrolled fire in an area of combustible vegetation occurring in rural areas. Depending on the type of vegetation present, a wildfire can also be classified more specifically as a brush fire, bushfire (in Australia), desert fire, forest fire, grass fire, hill fire, peat fire, vegetation fire, or veld fire”

It is known that wildfires behave unpredictably – this is fundamental – but it is my experience that humans in the presence of wildfire are also likely to behave in aberrant and unpredictable ways.

Here in this article, you will get to know about the causes, effects, and solutions to these wildfires and what can be done about them?

See also  Is Coconut Oil Bad For The Environment?

Mother nature is responsible for 10% of wildfires in the United States.

1. Wildfires take away homes, wildlife, as well as vegetation. All of the inhabitants of the wildlife environment now are found homeless. People often lose their houses as well if the fires are close enough to human housing. Vegetation is now obsolete if this area is near a farm or near the food of other inhabitants. Millions of dollars are spent repairing these damages and re-building homes and areas of vegetation.

2. The soil in the area of the wildfire has been completely destroyed. The soils in the forest are made with decaying nutrients and debris that have a lot of natural ingredients that help make the earth what it is. When a wildfire hits this soil it becomes too hot and all of those nutrients are gone for good.

3. Animals lose their lives. It is a sad but true fact that birds, squirrels, rabbits, and other wildlife animals are no longer a part of this great earth.

See also  What is an Earthship: Construction, Design and Examples

6. Large amounts of smoke are released into the air which makes it difficult to breathe and also causes air pollution.

7. Unfortunately, some human lives are also lost in wildfires. Typically people who are fighting the fire lose their lives trying to save others.

8. Ash and smoke can cause serious health problems to humans who suffer from allergies and other medical problems. This same smoke and ash have the ability to permanently damage the lungs and the throat.

9. Incomes and jobs are lost for workers in the agricultural field whose field crops and animals were destroyed by the wildfire. When people are out of work the economy suffers which makes it difficult to recover.

10. Insurance premiums soar sky-high after a wildfire because now everyone is looking to obtain some kind of insurance to prevent such devastating losses. People are unable to afford these premiums even when they need them the most.

11. There will be restricted recreational areas that will not be able to be accessed until the area is clear of debris and is determined to be safe to inhabit or visit.

12. The loss of animals has the ability to also create extinction for certain animals and other creatures of the forest.

1. Make sure you are following all of the local regulations and laws regarding burning fires during various times of day, year, and what materials and substances are permitted to be burned. If you do not see a sign with the rules find a park ranger or someone close by and keep a list of the rules and regulations on hand.

2. Keep up to date with the weather forecast so you are sure not to burn any substances while there are high winds or other treacherous conditions. Certain areas are more prone to wildfires than others so make sure that you check with the area to see if they are more at risk than other areas.

The Wildland Fire Assessment System will give you an updated map on which areas are more at risk. Weather is one of the biggest reasons why wildfires occur. Always keep in mind the weather before you ever even plan your trip.

3. Only light fires in areas that are easily controlled locations. Make sure when you are creating fire pits or other fires that you are doing so in areas that are controlled and fires cannot spread into other areas. A fire will need to be contained so that it will be easy to put out especially if a dangerous situation would arise.

4. Do not burn any materials that are combustible or unusual in nature. Do not throw garbage onto campfires or any other materials that should not be burned. You should only be using materials that are organic such as leaves, woods, or yard waste. If you put unusual materials into a fire it is only going to make the fire spread at a rapid rate which causes more problems for the area you are in.

5. If you are a cigarette smoker it is important not to smoke cigarettes where you are not supposed to. If you do smoke you need to make sure that you put your cigarette out completely before disposing of it.

Under no circumstances should you throw cigarettes onto the ground. Make sure they are completely put out and dispose of them properly. Most camping and picnic areas do not allow smoking so if you are going to smoke you need to know the rules beforehand.

6. Teach your children the rules and safety precautions of camping and being outdoors. Make sure they know to stay away from fires and to always allow an adult to start and put out fires. Many wildfires are caused by unattended children near fires. Teaching them the ways of nature could make all of the difference.

Wildfires are an unfortunate occurrence but they can be prevented. Learn the rules of the area in which you are camping and make sure you are following them explicitly. They are extremely dangerous and cause quite a bit of danger to our land and the habitat of many creatures.

Impact of wildfires by NOAA