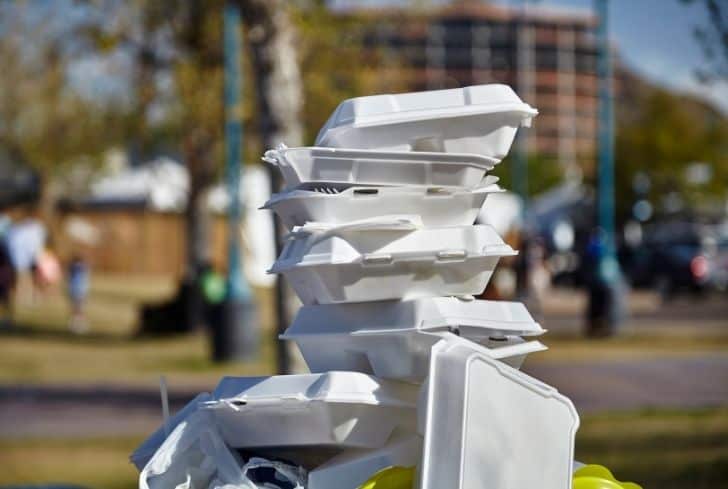 As an average human being, you are probably familiar with polystyrene. The name may sound distant, but we can bet you’ve come across polystyrene in recent times. Let us break it down for you.

Polystyrene comes from a polymer of styrene material. This plastic is a top choice in making plastic foam products. Typical examples are disposable plates and cups, which you may wrongly refer to as Styrofoam. Polystyrene also produces foams used in packaging your fragile products.

So, you see that polystyrene is not strange, after all. However, disposing of polystyrene is not as easy as it seems. The material can cause quite a damage to the environment, and there are many doubts as to if you can recycle it. This crossroad is where we step in to help.

With this article, we explain if you can recycle polystyrene and how safe it is for your use. We also go a step further to show you some things you can do with waste polystyrene.

Polystyrene is a plastic polymer. It comes from the polymer of styrene, which is a synthetic material. It is also one of the widespread plastic types. Its prevalence makes it easy for it to generate lots of waste.

However, is recycling polystyrene an option? Generally, you CANNOT recycle polystyrene through curbside collection. This is because most recycling centers do not accept it for recycling.

Precisely, this plastic material requires more advanced technology before you can reprocess it. And it is not easily available to most centers. So, you will find them rejecting your polystyrene.

For you to recycle it, you will need to do some hard work and find a recycling center that does.

So, before you recycle polystyrene, confirm if your local recycling plant accepts the plastic for recycling.

How Long Does Polystyrene Take to Decompose?

Polystyrene is one of those materials that you can’t know precisely how long decomposing it will take. Generally, many plastics take a very long period to biodegrade. The case is even more complicated for polystyrene since it is quite challenging for you to recycle it.

Degrading polystyrene requires lots of light and heat. However, our environment does not produce as much heat as it needs. So, decomposing polystyrene may take up to 500 years. In some cases, it may not even decompose at all.

See also  Are Staples Recyclable? (And Process to Recycle Staples)

However, the presence of food particles in polystyrene may make decomposing a little faster. Even with this effect, it may still take hundreds of years for polystyrene to finally decompose. For this reason, you should not attempt to trash your products carelessly.

Is It Safe To Burn Polystyrene?

You already know that it’s terrible for you to carelessly trash your plastic product. It even becomes harder since many companies may be unable to recycle it. Does burning now present a better option for you to treat your polystyrene? We’ll get to that very soon.

But first, you should know that when you burn anything, it gives off smoke. And, smoke is not the best for you or the environment.

So, it is NOT SAFE to burn polystyrene. And yes, the reasons are not far-fetched.

Whenever you burn polystyrene, it produces very toxic chemicals that can harm you and the environment. However, the good thing is the toxic chemicals can only harm you when they come in large quantities. Therefore, the burning of a tiny amount of polystyrene may not hurt.

Also, burning your plastic in regulated environments and incinerators may not hurt anyone. However, where you burn it on a large scale, you may put your lungs and the environment at risk. Here are a few chemicals that you can trigger when you burn polystyrene.

This chemical is the synthetic material from which you get polystyrene. So, it’s not strange that burning polystyrene will cause the release of the chemical. Styrene is very harmful, and it is a possible carcinogen. It also causes fatigue and headache.

This gas is the same that comes from car fumes. If you expose yourself to smoke from burning polystyrene, you are at risk of inhaling this gas. It may cause organ damage and psychological problems.

It would be best if you don’t give burning polystyrene a try. If for nothing, you shouldn’t burn it for the sake of your health and the environment.

Asking other questions like the effects of microorganisms on polystyrene is vital. Biodegradation is one of the essential biological effects you should know. So, is polystyrene biodegrade, meaning can it break down? Join us as we find out.

As you already know, polystyrene is from petrochemicals. This fact shows that it is not an organic product. Objects like this, including all plastics, find it hard to break down biologically. So, to answer your question, polystyrene CAN break down, but this takes a long time to occur.

Biodegrading polystyrene can take as much as five hundred years. That’s about five times more than the average period you spend living. Some companies can, however, use light and heat to break it down.

Why is Polystyrene Bad For The Environment?

Now, we go on to see if polystyrene is terrible for you and the environment. You already know that it takes longer to decompose and releases harmful gases when you burn it. But, have you considered the harm of polystyrene on its own? Don’t worry. We’ll help you make sense of it.

See also  Is Vinyl Flooring Recyclable? (And Can You Paint it?)

Polystyrene is very BAD for the environment. Here are some of the basis on which we say so.

When left alone, polystyrene can cause a whole lot of damage. One of these numerous harms includes leaching. When you dispose of polystyrene in landfills, they get exposed to a lot of sunlight and rain. These natural elements can cause the chemicals in your polystyrene products to wash away.

This process of washing away is what we call leaching. Leaching makes chemicals wash away into other products, into the soil or water bodies. In any of these environments, polystyrene can cause untold problems.

Many scientists now label polystyrene as a possible carcinogen. This term means that polystyrene may be a cause of cancer. So you are at a potential risk of cancer when you get exposed to polystyrene for long periods.

Besides, polystyrene usually causes other kinds of harm, like organ failure, weakness, and emotional problems. If you work in the production of polystyrene, you are much at risk of occupational health hazards. These hazards include skin and eye irritation and breakdown of your respiratory and nervous systems.

One of these chemicals is benzene. Benzene can cause air pollution. Thus, the corrosion may affect the air you breathe. That’s not all. Benzene can find its way into water and soil through rain or snow. When this happens, your drinking water may have benzene dissolve into it.

The environment is also at risk from dioxins and hydrofluorocarbon (HFC). Even though HFCs are no longer in use by producers who make use of polystyrene, they caused significant damage already. HFCs have, over the years, caused our ozone layer to deplete, leading to global warming.

What Happens To Polystyrene After Use?

If you find a company that recycles polystyrene, you can recycle your plastic products. The fantastic thing is that your polystyrene becomes useful in the making of other items.

If you trash your polystyrene, it will remain a litter, but this time, in a landfill. Polystyrene does not biodegrade quickly. So, your polystyrene may stay the same in the dump throughout your life.

You may choose not to throw your polystyrene away or even to recycle it. Instead, you can convert it to other purposes.

What Can You Do With Polystyrene? (Ways to Reuse)

If you don’t find a plant that accepts polystyrene for recycling and you don’t want to trash it either, there’s good news for you. There are a lot of options for reusing your polystyrene. We have lined up six exciting things to do with your waste polystyrene.

Most times, polystyrene comes to you as a packaging material. It would help if you also continue to use it that way. You can use polystyrene for packaging your delicate items like electronics. This use can come in handy when you’re moving to a new apartment or sending objects for shipping. You can also donate it to shipping companies.

3. Drainage for Your Plant Pots

Instead of filling your plant pots with stones, you can try polystyrene. Polystyrene works just as fine in your plant pots as pebbles would. Fill the bottom of your vase with polystyrene and place your soil and plant on top. It works as a drainage system for your watering activity.

Whether it’s for a performance or visual arts, you shouldn’t underrate how much your polystyrene can be of help. You can use polystyrene to create objects for stage plays. You could also cut your polystyrene into a palette for mixing your painting colors.

Polystyrene makes suitable objects for cooling your items. You can place polystyrene on your ice cubes to keep your cold drinks chilled. Polystyrene transmits heat slowly, meaning your things maintain low temperatures for a little longer.

The difficulty that comes with recycling polystyrene may be a turn off for you. Moreover, it can cause litter. Instead of worrying over all that, you use polystyrene in the other ways we mentioned in the article. However, to be double sure you’re not causing harm to the environment, we advise you to make use of eco-friendly options to polystyrene.