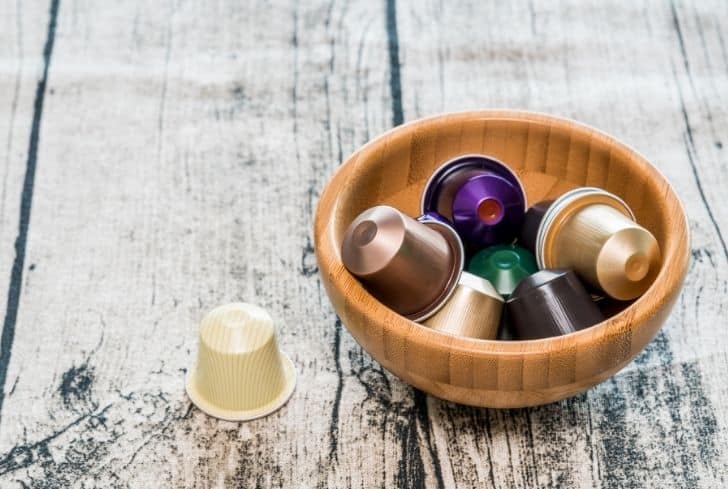 The invention of coffee pods revolutionized how we take the beverage. The United States alone, for instance, has seen rapid growth in the sales of coffee pods machines, from 1.8 million units to 20.7 million in the last decade. The question therefore arises, what is the relationship between coffee pods and the environment? This article will explain the said relationship if there actually is one.

The first question is, are coffee pods recyclable. Indeed, they are recyclable, but there is an asterisk to that answer. Most pods are made from aluminum, silicone, lacquer and mixed plastics which contain a single portion of coffee. These materials, are technically recyclable but will be harmful to the environment if not disposed of properly because of their non-biodegradable elements.

Can You Recycle Coffee Pods?

Of course, coffee pods can be recycled. The challenge with recycling coffee pods is that they are designed in a manner that does not, in itself, promote the idea of reusing, recycling or composting. They are designed to be used once and most people tend to throw them away right after that. The problem becomes throwing them away is harmful to the environment as these pods might end up anywhere including landfills and bodies of water, affecting marine animals.

Another problem with recycling coffee pods is that the aluminum pods are easily recyclable than the plastic ones, and the challenge with this is that the plastic pods make up almost 100% of all pods out there. Again, the aluminum used to create each capsule is too small for collection facilities to properly process. The recycling system is usually designed to handle larger items like cans and bottles, and as such, the small amounts of aluminum in the coffee pods will definitely raise a challenge when recycling.3e

See also  Can You Recycle Spiral Notebooks? (And Creative Ways to Reuse)

Coffee pods are biodegradable, but they take a ridiculously long time to do so. This is primarily because they are made from materials that, although recyclable, have non-biodegradable elements. The plastic in coffee pods, for instance, takes more than 500 years to break down. Additionally, as they break down, they release harmful amounts of methane gas, which is not safe for the environment, especially now when global warming is a real and threatening issue.

Recycle A Cup are a company that advocates for recycling or repurposing coffee pods, while at the same time selling some other related products. On their website, they state that their K-Cups pods are not biodegradable when left whole as their plastic and aluminum elements do not break down naturally, and the organic material is sealed inside. As such, they sell the Recycle A Cup cutter, a specialized coffee pod separating tool which you can use and break down their K-Cups pods easily so that they can be disposed of properly.

Can You Put Coffee Pods in The Recycling Bin?

The answer to this question is both yes, and no!

Pods made from aluminum can easily be recycled as aluminum can be recycled over and over without losing its original properties. Nespresso is one of the few companies that make coffee pods solely from aluminum, but they have a special procedure on how to go about it. First, they have to be rinsed or any excess coffee grounds left in the pods composted.

Next, you can either recycle their Nespresso pods at Nespresso shops or stores, drop the pods at special Nespresso collection points or give out your collected Nespresso pods to delivery personnel the next time they deliver their products to you. A list of their collection points is available on their website. Also, there are coffee pods from other companies, that are 100% recyclable and can therefore go directly into the recycling bin.

Pods made from plastic, on the other hand, have a bit more involved way of being recycled. Before placing them in the recycling bin, they should also be rinsed, and then have the aluminum lid carefully removed from the cup. The aluminum lids will be recycled alongside cans and other products made from the material, while the pods will join the plastic goods in the bag or bin for plastics. As such, dirty coffee pods should not be placed in the recycling bins, and neither should plastic pods if they have their aluminum lids.

How Long Does It Take for A Coffee Pod to Decompose?

These are pods made from plant-based materials and agricultural waste such as coffee bean skins, also known as coffee chaff. Compostable coffee pods degrade within 46 days.

2. Pods made from aluminum

3. Pods made from oxo-biodegradable plastic

There are companies that make their coffee pods from oxo-biodegradable plastic, like Urban Brew. According to their website, these pods take around 2 years to break down in landfills, excluding the foil lid.

4. Pods made from a combination of plastic and aluminum

These make up a huge percentage of all pods in the world. The combination of these and other elements makes it a bit hard to recycle them, and the majority are left in landfills. They take anywhere between 150 and 500 years for aluminum and plastic pods to a breakdown in those landfills.

Even biodegradable plastics take quite a while to fully decompose. According to an article on Wired, plastic bags that claimed to be biodegradable were able to hold shopping 3 years after staying in the ground or in the ocean. The article also suggests that plastic coffee pods have at least as long a lifespan, despite them being advertised as biodegradable.

Are Plastic Coffee Pods Bad for The Environment?

The answer is an overwhelming yes, although they have their benefits.

Most people do not know what to do with coffee pods after their use, and the majority end up throwing them away. As such, they end up in landfills where they will rely on several factors to decompose. The problem is, as already mentioned above, the biodegradable ones will take about three years to decompose. Those made from a combination of plastic and aluminum can take anywhere between 150 and 500 years to break down in those landfills.

As with anything that is put in landfills to decompose, they will have to release some emissions. Plastic coffee pods will definitely release methane and carbon dioxide gases, which are both greenhouse gases. Even if they are incinerated, they will produce these same gases and many more toxins into the atmosphere.

Once these gases are released to the atmosphere in large amounts, they will form a greenhouse effect and trap heat within the earth. Basically, they contribute to global warming and eventually climate change, which is terrible for the environment.

3. The recyclable amount is minimal

Although plastic pods are technically recyclable, the amount that is recoverable is small. This mainly is because they have to be cleaned before being sent for recycling. Unfortunately, not too many consumers will follow such procedures of cleaning them before sending them for recycling. If they are not cleaned as required, they cannot be recycled and this means a massive amount of these pods will end up not being recycled, or if they are, and they were not as clean as they should, the end product will be compromised

See also  Is Silicone Recyclable? (And Is It Environmentally Friendly?)

4. Recycling consumes energy and is expensive

Even if recycling is probably the best way to handle plastic coffee pods, it requires a lot of energy, which inevitably, is not good for the environment. The process also uses up a lot in terms of money and might not be worth it in the end.

How Do You Dispose of Coffee Pods? (Safe Ways to Dispose Of)

1. Disposing of them in landfills

It is not the safest and environmentally-conscious decision, but it makes the cut for safe ways of disposing of coffee pods. Some manufacturers, like Urban Brew, use oxo-biodegradable plastics, designed to break down in landfills at an accelerated rate. These specific ones take about two years, while compostable coffee pods are reported to degrade within 46 days. Unfortunately, aluminum pods may take up to 500 years, which is not the ideal thing for the environment. However, with the correct conditions, and based on the material, landfilling is a viable way out

Recycling depends on a number of factors, as discussed above. Both aluminum and plastic coffee pods can be recycled, but they have to undergo several essential procedures. First, you will remove the foil lid, which most likely is made from aluminum while the rest of the pod is plastic. The two cannot be mixed when recycling, so they have to be separated. Next, you will scoop the coffee grinds out and then your empty pod has to be rinsed or dusted off before being thrown into the recycling bin.

3. Throwing them in the green waste bin

4. Take them back to the sender

Some coffee pod companies allow people to return the used pods for proper recycling. Nespresso, for instance, has thousands of collection centers where you can take their used products for proper disposal. These companies have their proper disposal channels or have n arrangement with local councils, municipalities or cities on how to properly dispose of such products. This way, the city will just sort out the problem on your behalf

Some pods have been made in a way that they can be used more than once. The subsequent use might make the beverage taste a bit weaker or more watered-down than the first, but it is a process that saves on money, reduces waste and saves the environment, just for a while. Other customers have reported that they actually clean, refill and reseal their pods for subsequent uses.