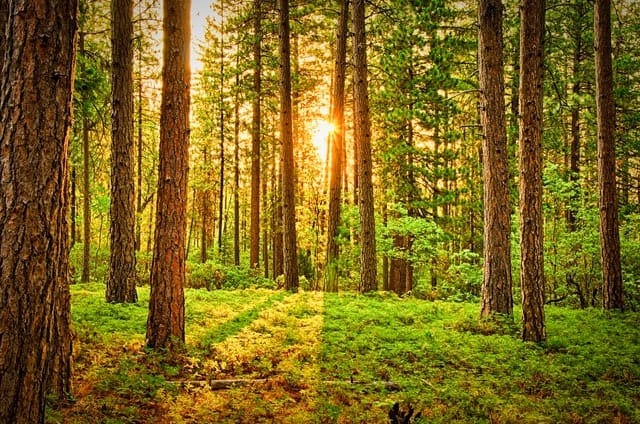 Forest bathing refers to a cultural practice whereby people take visits to the forest for health purposes. The practice of forest bathing was adopted from the Japanese who believed that interaction with the forest would allow man to benefit through both physical and mental health.

The practice is backed by some scientific evidence that show a decrease in heart rate, blood pressure, enhanced mood and immunity, which leads to a decrease in production of stress hormones and improved general health. Forest Bathing is also referred to as Shinrin-yoku where an individual is required to visit a natural habitat and relax in the environs, thus achieving restorative health benefits. Here are the top 15 benefits of forest bathing.

The forest also has a wide range of anti-inflammatory terpenes which protect vital organs such as the brain, kidney and liver from inflammation thus keeping it healthy. Terpene D-limonene is also known for its ability to fight against tumors. Research has also shown that it is effective in the fight against breast, intestines, colon, and pancreas cancers.

Forest Bath has been beneficial to forest walkers who range between the ages 36 to 77 years as it has allowed them to register a decrease in systolic blood pressure within four hours of walking to 134mmHG from 141mmHg. For this reason, Forest Bathing is an effective medical phenomena that should be incorporated into the treatment of patients with hypertension.

3. Improves Mood. Forest bathing has been proven to boost moods. The results after taking people with anxiety, high confusion levels, and depression through a forest bathing trip showed that the moods of the individuals significantly improved helping them deal better with their conditions.

See also  What is Public Transportation: Modes and Benefits

Moreover, forest bathing has been very beneficial to children with Attention Deficit Hyperactive Disorder (ADHD), as it reduces their stress levels and allows them to bond with nature giving them a better mood. The production of the hormones Dopamine and Cortisol play a major role in stress reduction and hence greatly contribute to better moods.

4. Improves sleep. Research has shown that forest bathing has helped individuals to improve their quality of sleep. Forest walkers in Tokyo aged between 37 and 55 years were part of a research that concluded that the forest bathing trip significantly increased the duration of their sleep regardless of the physical activities. The environment in the forest relaxes the body and the mind, providing it with a peaceful experience which allows one to get better sleep at night.

5. Increases energy levels. Forest bathing allows the body to rejuvenate itself as the anti-stress hormones are produced. Taking deep breaths in the forest revitalizes the body allowing it to feel more energetic and free from stress. Nature increases vigor in individuals and groups and fights fatigue allowing one to feel refreshed. The forest triggers the production of the hormones dopamine and cortisol which have a calming effect on the body and mind.

7. Accelerates rate of recovery from illness or surgery. The view of a forest through the hospital window has shown a greater rate of recovery, for example, among patients who have undergone gall bladder surgery. Patients recovering from illnesses and surgery got better after being exposed to the forest through forest bathing. Their stress levels remarkably reduced as their immune system got stronger and recovery was heightened. Recovering patients were found to require less medication as their conditions got better.

See also  What is Plastic Recycling and How to Recycle Plastic

Forest bathing increases immunity by not only increasing the activity of natural killer cells but also the number of the cells. The effect of forest bathing on the immune system can be attributed to the production of phytoncide, an essential oil found in woods, vegetables and fruits emitted in order to protect the plants from insects and germs. The oil when inhaled helped boost the immune system.

9. Protection against Diabetes and Obesity. Forest bathing involves a lot of physical activity that can be very beneficial to anyone who is fighting obesity. Forest bathing helps in the reduction of adiponectin which is related to insulin resistance and obesity since it is responsible for the regulation of fat metabolism, weight gain and glucose levels.

Forest bathing also generally reduces the level of glucose in patients with diabetes. Consistent forest bathing every eight months for six years resulted in the improvement in blood sugar levels for diabetic patients.

10. Better skin. A trip through the forest can expose one to the different beneficial plant secretions that play a role in improving the health of one’s skin. The terpene produced by conifers such as fir, cypress, and pine apart from having anti-inflammatory properties also gives clear and more comfortable skin outlook. Additionally, it helps in curing skin disorders such as Eczema and Psoriasis.

11. Can be used as therapy for children. The increased activities in our urban centers continue to have nothing but negative effects on the younger generations. The noise and the pollution makes them stressed and uneasy from a tender age and the effects are reflected in their physical as well as their mental health. The technology in itself has also negatively imparted their social life.

Taking the children into the forest for a hike or jogging or generally for forest bathing allows them to absorb the positive energy put forth by mother-nature. The forest allows for the production of cortisol a hormone that translates in increased energy and relaxation of the mind eventually.

12. Decreased inflammation. The air in the forest has a soothing effect on inflammations since the exchange between CO2 and Oxygen is active. The air that gets into the lungs is fresher and contains other compounds that have secreted by the trees which reduce inflammation. Compounds such as D-limonene are found in some forest airs and they help reduce lung inflammation as well as breathing problems such as asthma and COPD.

13. Decrease the risk of heart attack. Frequent forest bathing have shown the effect they have on the heart rate, blood pressure and stress levels. They are significantly reduced and therefore the risk of suffering from a heart attack is reduced as well. The level of adiponectin is reduced when one goes for a forest bath and this translates to an anti-inflammatory effect on the blood vessels therefore preventing heart attack.

14. Relieves sore muscles. Terpene found in the conifer species of trees has a variety of positive impacts on the body. It helps in the reducing joint pains, inflammation of muscles, back and neck pain as well as Osteoarthritis. In a medical research, it was found that back pains and tight neck joints were relieved as the patients went through the forest bathing. Inflammations and other joint pains were also seen to improve significantly.