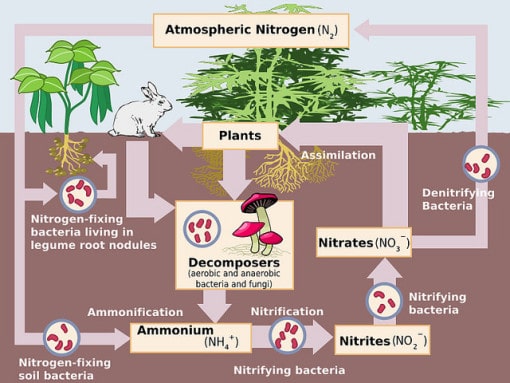 Nitrogen is one of the most important elements found on earth, and is one of the most essential nutrients taken by living organisms. Nitrogen is the major component found in the air that we breath, however in this form it is not accessible to the majority of living organisms. Approximately 78% of the atmosphere is comprised of this colorless, odorless, nontoxic gas. Nitrogen gas cannot be directly used by plants and therefore needs to be converted into nitrate compound by nitrogen fixing bacteria in soil.

The process through which this element becomes accessible for living organisms to absorb it is known as the nitrogen cycle.

Nitrogen is found in two major forms in the atmosphere. The first of these is N2, a molecule comprised of two nitrogen atoms. This format is inaccessible to the majority of organisms on earth, which makes it quite a valuable and rare resource which can hold many ecosystems back from growth. The other form is NH3, a molecule comprising a nitrogen atom and three hydrogen atoms, which is more commonly known as ammonia.

There are many other variations of nitrogen found in the world, be they man-made or organic. Because of this, nitrogen is a versatile and plastic element which sees many changes throughout the nitrogen cycle. The majority of the changes experienced by nitrogen in this cycle (for example: nitrification, ammonification, denitrification and fixation) are dependent mostly on small organisms such as bacteria and fungi.

The Processes of the Nitrogen Cycle

The nitrogen cycle is split up into five main processes. These processes are nitrogen fixation, assimilation, ammonification, nitrification, and denitrification. Each of these play an important role in movement of nitrogen through the different ecosystems on earth.

See also  Are Clay Pigeons Biodegradable? (And Bad for the Environment?)

How Increase in Nitrogen Affects Ecosystem?