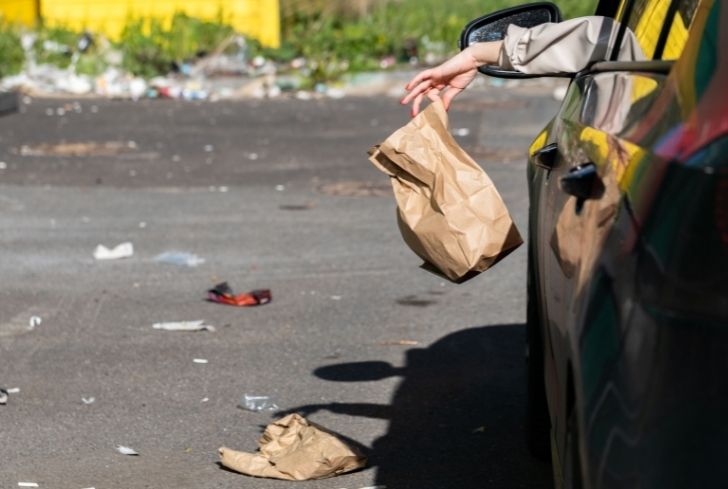 It’s a prevalent practice to stop at a drive-by when driving long distances and get food on the go. It’s just as convenient to throw food scraps and empty take-out plastics out the window when we’re done with them. After all, it’s the highway, and the wind would probably blow it away anyway.

Or, when taking a hike, after snacking on some carrots or an apple or banana, you dispose of it wrongly. After all, it’s biodegradable, and an animal or insect will probably come along and finish what you started.

However, you might consider your actions normal since it’s common practice. Statistics show that about 51 billion liters of trash are discovered on American roadways yearly. But as much as this is common practice, is it good practice? And at what cost does it come to us and the environment? In this article, we’ll explore the answers to these questions. So, let’s dive in!

Is Throwing Food Scraps Out the Window Considered Littering?

Litter is small amounts of waste products or trash disposed of in the wrong places. Food scraps belong in the trash or your compost pile or landfills. So, when you randomly throw them out the window of your car or house, you are indeed littering the environment.

Food scraps are among the most frequently littered trash. It makes such an environment look dirty, and it doesn’t speak well of those living in and around the littered environment. It also costs a lot of money annually for clean-up.

What is Considered Littering?

Littering is the act of discarding, intentionally or unintentionally, any type of waste in places other than the appropriate disposal areas or containers. Litter can be thrown on land or in water.

Littering is one of the most common causes of pollution because we put trash in the wrong place. Typically, our trash belongs in the garbage bin, recycling bin or recycling facility, incinerator, and landfill. Any waste not in any of these places is considered litter. Sometimes we’re too lazy to go all the way to the bin.

Littering can also be leaving trash to overflow from a waste bin or abandoning items by the roadside or in a place they shouldn’t be. Or it can be stuff blown out of uncovered trucks and trailers. It can also be leaving waste items on or under your seat at a stadium, concert, or party.

The highway is one of the most commonly littered areas. We’re all used to seeing empty food packets, beverage bottles, crumpled paper, or half-eaten fruits on the highways when we’re driving. Trying to maneuver your way around trash while at high speed can be both annoying and dangerous.

Littering is dangerous to both the environment and man. Litter can get into the water bodies from the bushes or land where they’re dumped. And this can cause harm to animals that ingest the waste or even get injured by it. So, dumping sewage, oil products, or any harmful chemical substance or mineral in water or land is littering.

Dangerous littering is the improper disposal of harmful waste products. This can include throwing an already lit cigarette in dry gas, leaving out a syringe in a public place, or leaving broken bottles carelessly on walkways.

Is Throwing a Banana Peel Littering?

A banana peel that’s not in use anymore is trash. This means it belongs in a waste bin or a compost pile. If you put it somewhere other than these places, like the floor or any water body, it becomes litter.

Popular opinion believes that banana peels are organic products and break down naturally. So, you might feel it’s okay to throw it out anyhow since it’ll decompose fast. However, it takes weeks, sometimes months, to break down in the soil.

Carelessly tossed banana peels are slippery and can be dangerous. It makes the surface of the ground too smooth and therefore reduces friction. So, you can slip on it if you don’t see them while walking.

They can also attract insects and bugs that would threaten your environment. And can be smelly while the decomposition process is occurring.

What Can Happen If You Throw a Banana Skin on the Road?

It’s easy to throw banana peels on the road after eating them. After all, you most likely didn’t see a trash can on the way. But throwing your banana peel on the road has harmful effects.

First, it can attract scavenger species, sometimes dangerous animals such as bears and foxes, away from their natural habitat and into residential areas. This will pose a threat to humans. It can also cause this wildlife harm. This is because they can get hit by a car while trying to eat the peels or ingest other harmful waste products unknowingly.

The best option is to dispose of your banana skin properly in a waste bin or a compost pile. If you’re in a situation where there’s no waste bin on-site, you can keep the peel till you find the nearest one.

If these aren’t options you like, you can try using your banana peels in your garden as a fertilizer. It’ll work wonders for plants such as tomatoes as it’ll provide your plants with essential nutrients such as phosphorus.

Banana peels also act as excellent polishers. So, rub the outer layer of the banana peel on your leather shoes or bags or your furniture and watch how polished they’ll look after. They also help to provide soothing relief against insect bites and rashes.

Can You Throw Orange Peels Out the Window?

A common misconception is that it’s okay to throw out natural waste anyhow because it’ll decompose quickly. But just as we’ve established with banana peels, this isn’t the case. And just like banana peels, orange peels take about six months to decompose fully and shouldn’t be thrown out the window.

Natural litter is still litter, no matter how fast it decomposes. However, throwing an orange peel in grass or a garden can act as a natural fertilizer and insecticide. This is better than just tossing it carelessly out the window. Orange peels are full of nitrogen that helps boost the nutrients in your soil which is suitable for the plants.

You can also use your leftover orange peels in the garden to ward off cats and aphids when you bury the peels shallowly in your garden. And if you feel a little outdoorsy, you can plant your orange seeds with your orange peels.

All you have to do is get an orange peel that’s still intact or almost intact. Water it regularly and put it in a sun-filled area. Then you fill it with soil and place your seeds. The peel will provide natural nutrients for them while growing.

Apart from using it in your garden, there are other ways you can safely re-use your orange peels rather than toss them out the window. These include using it to get rid of foul odors around the house, using it as a hair conditioner, keeping your closet and clothes smelling fresh, and even polishing your wooden surfaces.

Can You Be Ticketed for Littering Food Scraps?

Food scraps pollute the environment and also make it unappealing. It can even contribute to crime and insecurity within an environment. Many states spend millions every year trying to clean up street littered food scraps. About $11.5 billion is spent cleaning up litter every year in the United States alone.

As a result, several states in the U.S. have begun to classify littering as an illegal act, thereby giving penalties. For example, Alabama, Arkansas, California, and Alaska issue out $100 to $1000 fines for first and subsequent littering offenders.

The state of Arizona issues out up to $2500 fines. So, yes, you can get ticketed for littering what you’d consider little pieces of food scraps.

Some states even issue punishments such as picking up litter over a specified number of miles suspending offenders’ driver’s licenses, or community service over a certain period. Some even go as far as jail time. On the other hand, Florida, Maryland, and Idaho give out jail time for litter on both public and private property between 15 and 500 pounds.

A lot of states are constantly modifying their litter laws. So, next time, before you throw those fruit peels or leftover pieces of chicken or meat carelessly or even leave your trash overflowing from your garbage can, consider the litter penalties in your state to avoid these penalties.

There’s probably no permanent solution to littering, but there are a few ways by which we can reduce it to prevent further harm to humans and animals. The first is for communities to increase the number of public waste bins around neighborhoods.

Increasing the number of trash disposals available in each neighborhood can help ensure that no one has an excuse to litter the environment. Also, garbage bins should be emptied as frequently as possible to prevent the overflowing of trash.

The government should also enforce stricter litter laws. Although some states have fines, community service, and even jail time as punishment for littering, these penalties are not consistently enforced. By putting in place more stringent litter laws and enforcing harsher penalties, guilty parties will begin to correct their actions once they know the authorities will punish them for littering.

Despite these, the ultimate solution to littering is for each of us to decide to stop littering. After all, the decision must start with us. So, we have to be the change we want to see.