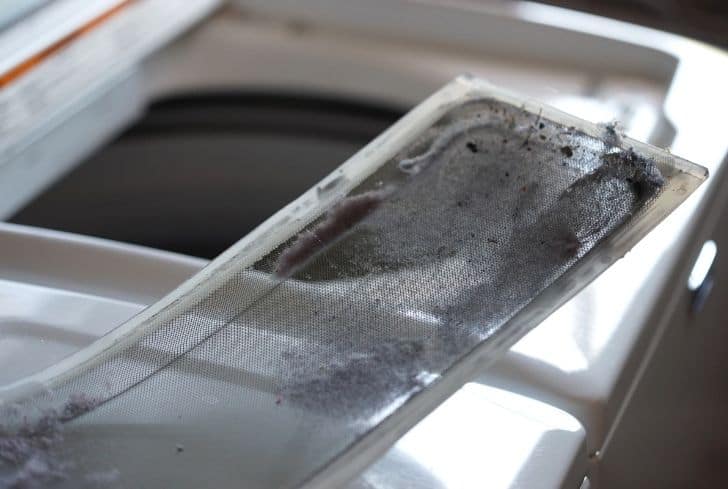 Right next to line-drying clothes, the best strategy you can apply for saving energy is to get an energy-efficient dryer. It will dry a full load of clothes, and you’ll only have to clean out the lint trap after every use. This latter step is crucial as dryer lint, a by-product of the laundry can end up clogging your dryer. A clogged dryer means it will take longer for the clothes to dry, which keeps adding to your energy costs.

But, what to do with all that dryer lint you collect every week? Should you just throw it in the trash straight away, or can you recycle it? Let’s find out!

What Exactly is Dryer Lint?

Before answering the question of whether you can recycle dryer lint or not, it is crucial to understand what it is made up of. In any case, if the dryer lint’s components cannot be recycled, it will not be possible to recycle the lint as well.

So, dryer lint is mainly made of small fiber fragments from your clothes. It also includes any hair, dust, and the likes that might have been present on the clothes at the time of washing. While the clothes are washed, these fragments reach the surface of the clothes. Ultimately, when the clothes are dried, the particles become loose and end up in the vent trap.

Can You Recycle Dryer Lint?

Dryer lint mainly has natural, short fibers derived from your clothing, along with a few other non-recyclable things, such as dust and hair. So, you cannot recycle dryer lint in the usual way because no recycling center will accept it.

But, does that mean you should throw away dryer lint completely? Of course not! There are different ways for you to put dryer lint to good use, and some of those have been outlined below.

Yes. Dryer lint is compostable. One of the foremost ways to recycle dryer lint is to add it to a compost pile. The lint will break down pretty quickly and turn into a part of soil enrichment in that organic garden you’ve been tending for a while.

See also  Can You Recycle Plastic Cutlery? (And Is It Biodegradable?)

Here’s how you can do it:

You can also drop the lint directly on the compost pile every time the lint trap of the dryer is cleaned. The method of composting lint is the same as that of adding newspaper or any other similar product.

Can You Compost Dryer Sheets?

Dryer sheets are mostly made up of synthetic material usually polyester and are not safe to compost. The reason for not putting down the compost is due to the fact that the material won’t break down easily in your compost pile.

Whether the dryer lint is good for the environment or not depends on the material that you are drying. Keep in mind that dryer lint is compostable and environment-friendly only when all that material you’re drying is completely made of natural fiber like cotton.

Most clothes are made from synthetic fibers. The lint derived from such clothes is not compostable and ends up polluting the environment.

As much as two thousand polyester fibers tend to come off one fleece sweater in one cycle. When you dump synthetic lint straightaway, it finds its way through the sewage treatment system, and finally, into the oceans of the world. Clear consequences of this type of pollution are yet to be known, but it is a general consensus among environmentalists that microscopic plastic fibers can harm marine life in a major way.

Now, it’s not like you would stop wearing your favorite flannel sweaters in those cold months. You will just have to refrain from throwing all the dryer lint away.

There is a lot that you can do with used dryer lint, instead of throwing it away. Keep storing lint in a milk jug or a grocery bag in the laundry room, and use it for the following purposes. Given below are the top seven ideas for using dryer lint, so that you never run out of ways to use it.

The highly-flammable dryer lint is removed mainly for preventing fire. Thus, it can also be used for starting a fire where and when you want.

You can pack some lint into a small part of a paper towel or toilet paper tubes to create fire starters. The lint will help you light a fire pretty fast, and the kindling will get a good start. Firestarters like lint are lightweight enough to be conveniently carried along your camping trip. You just need to put them in a resealable bag to make sure that they are dry.

Another useful method to make fire starters is to put the lint in the cups of paper egg cartons (not Styrofoam cartons). Melt candle wax and pour it all over the lint, before cutting the carton to make twelve separate fire starters. You can easily start a nice blaze by lighting the paper egg carton’s edge and putting it next to the kindling.

2. Make A Comfortable Bed For Your Pets

Dryer lint can be used to make amazing bedding if you have pets like rats, gerbils, hamsters, and guinea pigs. Think about it: lint is soft, clean, and super-easy to replenish when it gets soiled. Moreover, it will be a lot cheaper than store-bought bedding.

If you are planning to utilize dryer lint for your pet’s bedding, make sure not to put fabric softeners, dryer sheets, and scented laundry detergents. Many pets are sensitive to such chemicals and might get skin irritation.

3. Stuffing For Small Toys And Other Crafts

Lint has a spongy consistency to it, which makes it the ideal material to be used as a stuffing for toys and other craft projects. You can put some of it into that stuffed animal your kid’s love or place it inside a dog bed to make it more comfortable.

Remember that dryer lint is not supposed to be used for any project or toy that you are planning to wash in the future. Washing makes the lint become compact and the stuffed toy ends up losing shape.

Truth to be told, a thick layer of dryer link isn’t an amazing mulch for the plants that you’re trying to grow. However, it is a good help for specific areas that need extra attention to prevent erosion and weed growth.

You can add a lint layer around the plants, right below the soil to create a protective, natural barrier around the plants. Keep in mind that you should use lint from the dryer loads that have the most number of natural clothing.

See also  Can You Recycle Umbrellas?

5. Make Threads Out Of Dryer Lint By Spinning

For the fiber artists among you, dryer lint can be easily spun into a new yarn or thread to be used in your crochet or knitting projects. In case you are not too fond of thread color, simply use natural dyes to create a wide range of amazing colors.

Dryer lint is the perfect fit for your paper mache projects. In fact, paper mache projects are great for organized groups and can be made really inexpensive when everyone participating brings their own lint to work. You can get enough lint for a major project by simply visiting your nearest Laundromat.

Here are the steps you should follow to use dryer lint for making paper mache goodies:

7. Use Lint As Packaging Material For Valuables

Finally, dryer lint can also be used for packaging valuable, small items. It would take loads of lint to completely fill up those cardboard boxes that are used for moving. However, you can always use lint to wrap around the small goods and use some other material to fill up the box.

As mentioned before, lint has a spongy texture. This will help in protecting your goods from wear and tear. So, if you are planning to shift houses within the next couple of months, start saving dryer lint from today. Any household should be able to collect enough lint for packaging within months.

It would feel really nice if you could recycle all of that dryer lint and not harm the environment at all. However, this is not an option. So, the next best thing you can do is to reuse the lint in the ways outlined above. Just pick the way you want to reuse dryer lint, and keep it out of your garbage bin.