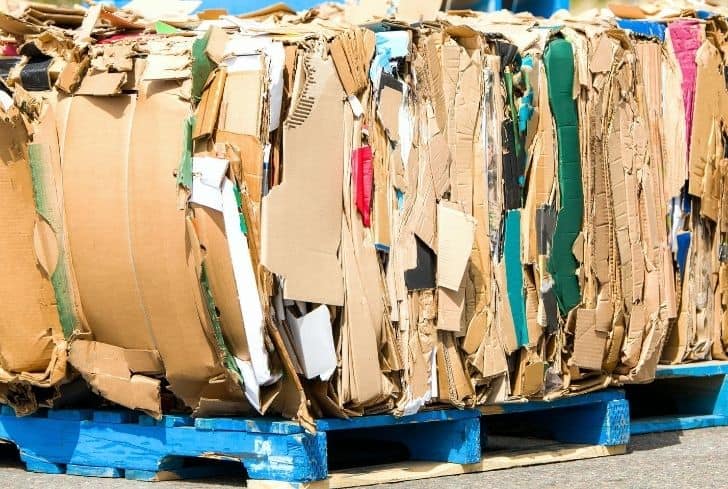 The COVID-19 pandemic forced us all to stay back at home, indoors, not knowing when we would ever safely go back out or interact with others. Economies suffered, jobs were lost and everyone all over the world was in a bad place. However, the same pandemic drove up the need for buying products online and having them shipped. Almost all these products were packed in boxes or cardboard.

Cardboard use has continued to rise with the advancement of technology and global economies. They are ideal for carrying items in a manner that will save the products from folding or facing sudden impact. Once you unpack your products, most people throw away the cardboards, or simply reuse them, only if they will provide the required help. However, can they be composted and be an addition to your garden? This article has more on composting cardboard.

Can You Compost Cardboard?

Yes. You can compost cardboard. It is reported by the United States Environmental Protection Agency that cardboard waste makes up over 31% of landfills. Using cardboard in compost is a rewarding experience that makes great use of boxes taking up space. Rather than tossing them in the trash, put them in your compost heap.

The composting process turns large amounts of organic matter into small amounts of decomposed materials that are used to enrich other plant life. Cardboard is a source of carbon, which provides the microorganisms in your compost heap with the nutrients and energy they need to turn your trash into useable compost.

Plain cardboard boxes, toilet paper rolls, paper towel rolls and cardboard egg cartons are usually safe to use in a compost heap. Cardboard is made from natural materials which makes it compostable; meaning it can break down in natural elements and leave no harmful toxins.

You cannot simply put the boxes into the compost heap as they take a long time to break down. You need to prepare them properly, as well as add the right materials alongside the cardboard, for it to be valuable to your compost.

Fourthly, you have to add water to the compost heap to supply it and the microorganisms with the moisture needed to break down the materials into useable compost.

See also  Can You Compost Shrimp Shells? (And Are They Good For Garden?)

Only clean cardboard should be added to a composting bin. Cardboard that has been treated with chemicals, that came into contact with spoiled food or chemicals or that includes synthetic substances, such as foil or plastic, should not be used in the compost heap.

These types of items can contaminate the compost and decrease its value. Another precaution to consider is turning the cardboard, which not only combines it with other green materials but also prevents the compost from matting. Matting slows the composting process by reducing the amount of oxygen and water available to the microorganisms living inside.

Waxed cardboard is compostable, but they are quite difficult to compost. Waxed cardboard boxes are commonly used for transporting fresh produce, unfortunately, due to food contamination, these boxes are generally only used once before being disposed of in a landfill.

The reason why they are not suitable for recycling is because of their wax coating, making them part of general waste, where they do not biodegrade in landfills. However, if composted, they reduce their effects in landfills, including the release of methane to the atmosphere, and can produce significant savings in waste management costs.

While composting is often a good choice for spare cardboard, composting waxed cardboard would not be recommended, or is made difficult by the same reason why tossing a plastic bag into your compost is not recommended.

Waxed cardboard is corrugated or multi-layered cardboard that is lined with polyethylene to prevent it from getting soggy. This material is designed to be refrigerated or frozen. If you can see or feel waxy residue when you scrape a box with your fingernail, it is waxed.

Retailers primarily use this type of box to ship products, and consumers rarely use them. As such, you will find many programs recycling waxed cardboards outside the home, and set up by organizations or companies that do so.

Cardboard is relatively biodegradable. Given time, microorganisms and other decomposers will break the fibers of the cardboard down. The rate at which this happens depends on several factors, including the type of cardboard, the state of the cardboard at the beginning of the decomposition process and the nature of the surroundings.

First, corrugated cardboard breaks down significantly quickly. Waxed or heavily processed cardboard, on the other hand, can take quite some time. The wax coating prevents leakages, and their water resistance significantly prolongs the process, and are the reason why it can take up to five years before these cardboards decompose.

See also  Can You Compost Chocolate? (And Chocolate Cake?)

The more surface area the cardboard has exposed to water and biological decomposers, the more efficiently these decomposers can take the cardboard apart. Thirdly, different environmental conditions affect the decomposition process, notably moisture, heat and the presence of other biological materials — the wetter, the better.

Decomposing life forms thrive in moist soil, but no matter how wet, nothing will break down in complete sterility. There must be a thriving ecosystem within the soil itself to quickly decompose cardboard.

Yes, cardboards are sustainable. Cardboard is one of the easiest and most environmentally effective materials to recycle since the fiber in cardboard has already been processed. They are just a form of paper and come from a natural source, trees.

As a natural source, it will therefore break down and release carbon into the soil. Some argue that cardboard is not sustainable because it comes from trees and therefore encourages deforestation.

However, as it is used for packaging, consider the alternative, plastic packaging, which is neither compostable, recyclable or biodegradable. cardboard is reusable, ecological, compostable, and recyclable. It also biodegrades over time even in landfills, if it is not composted or recycled, unlike plastic which can live on for hundreds of years.

Unfortunately, if it degrades in landfills, it releases methane gas, which has been proven to be more toxic for the environment, even more than carbon dioxide. Luckily, cardboard does not pose a threat to the natural environment even if it finds its way into the oceans and waterways.

How Long Does it Take For Cardboard to Decompose?

On average cardboard takes around 2 months until the biodegradable material breaks down. However, as already mentioned above, cardboard can take quite a long time to decompose if the factors that favor quick disintegration are not met.

To help speed up the process, shred the cardboard into small pieces before adding it to the compost. Then, sprinkle the shredded cardboard over the top of your compost pile and turn it gently to incorporate it.

Secondly, make sure the cardboard is mixed in with nitrogen-rich materials like some fresh greens, or kitchen waste. A healthy carbon to nitrogen ratio ensures the decomposition process goes along quite quickly.

Thirdly, make sure the mixture is well hydrated so that the microorganisms that aid in the process, live in an ideal atmosphere.

Finally, remember to turn the cardboard and the mixture in general, so that it combines well with the other green materials. Doing so also prevents the compost from matting.

Matting will slow the composting process by reducing the amount of oxygen and water available to the microorganisms living inside. The process can still take some months, but it is considerably quicker than other methods.

Is Cardboard Good For the Soil?

Cardboard in the garden will also kill lawn grass and help you get a new bed ready for veggies, ornamentals or whatever you want to grow. You can use it as planters, to start a garden path, mulch a prepared bed, start a new bed and much more.

Here are some ideas for using cardboard in the garden:

Lay some cardboard down where you want a path and cover them with pavers. Over time, the cardboard will decompose into the soil and will kill any undesirables under the pavers in the meantime.

You can also place pieces of it around plants in areas that are prone to weeds. It will reduce weeds drastically and eventually compost them into the soil.

Simply shred the cardboard and add it as an important carbon source to your compost bin. The result will be compost that is perfect for the soil and crops.

It is a garden idea that is used to start a new bed using cardboards. You only need to remove large rocks and other items you do not want in a planting space. You can even have the weeds around because they eventually will die.

Lay the cardboard down on top of the area and moisten well. Keep the area moist and you will eventually kill the weeds and the grass, making it ready to till. Layered beds become super-rich and nutrient-dense if you use cardboard.

This is a cute idea that you can do with your kids. Fill cardboard boxes with soil and grow colorful flowers in them. It can be a special gift from the kids to their grandparents or teachers, and in time, the cardboard will disintegrate, leaving the flowers to grow in the garden, while at the same time enjoying the nutrients from the cardboard.