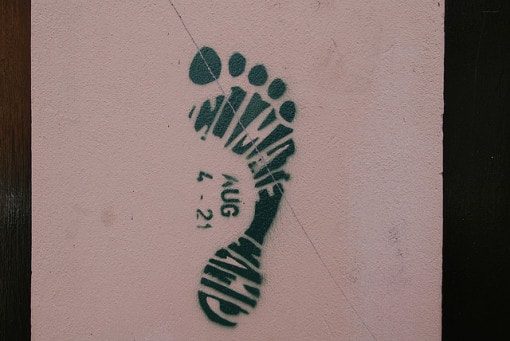 To many, the notion of talking about their carbon footprint is still a novel one and in most instances, bearing in mind that human beings are sociable creatures, the subject of carbon footprints is rarely brought up in conversations. Yet, it’s important to start as early as today to have a conversation about the many ways you can reduce your carbon footprint. Before even reading any further, you can start thinking about ways to reduce the excess waste lying in and around your home. Seeing that space remains at a premium, you can begin by asking yourself this question; what don’t I need. After reading this article you will begin to have a clearer picture of just how much those unnecessary items contribute towards increasing your carbon footprint, rather than reducing it.

The term carbon footprint is defined as the amount of carbon (usually in tonnes) being emitted by an organization, event, product or individual directly or indirectly. Everyone’s carbon footprint is different depending on their location, habits and personal choice. Each of us contributes to the greenhouse gas emissions either by the way we travel, the food we eat, the amount of electricity we consume and many more.

For example, when you drive a car and burn fuel, it generates certain amount of CO2 in the atmosphere. When you heat your house, it also generates CO2 assuming that electricity is coming from coal powered plants and similarly when you eat food, it also generates some quantities of CO2 as the food gets processed.

There are people, organizations and even local governments who have begun talking about the carbon footprint and motivating each other to put in place plans to reduce their carbon footprint. But they aren’t always sure about the most effective ways forward.

They also react with caution (otherwise recklessly) because footprint reductions require a drastic change to lifestyles and current ways of doing things. This short explanation on the carbon footprint guides those still new to the concept.

See also  Are Landfills Bad for The Environment? (And Alternatives to Landfills)

But climate scientists and global campaigners for the reduction of greenhouse gas emissions argue that there is more than enough evidence to suggest that enough damage has already been done. So, they say, whether measurements need to be taken or not, action needs to be taken today. These are just some of the main contributors to today’s carbon footprint.

Hundreds of companies from around the world are making concerted efforts to reduce their own carbon footprints. But the biggest culprits numbering no more than one hundred of the world’s largest companies have been the most reluctant to change. Also, they continue to resist legislative attempts to do so through legal means.

But they have been responsible for two thirds of CO2 emissions so far. Here are some anecdotal highlights on the reactive and destructive actions of some of these companies.

Ways to Reduce Your Carbon Footprint

The situation of annual (large) increases in greenhouse gas emissions is serious. It warrants immediate action, no delays and without compromise. Huge gatherings (in their thousands) at conferences designed to have a conversation about the carbon footprint are encouraging.

But some points and opportunities have, to date, been missed. Invariably, groups discuss ways and means to reduce their carbon footprints without adversely affecting their vested interests or the communities or nations they represent. Done correctly, the reduction of carbon footprints is going to change lives.

And it will be for the greater good in the long term. Here are some of the most effective ways to make an immediate impact on reducing your carbon footprint, whether individually, domestically or commercially.

See also  How Many Amps Does a Microwave Use? (Detailed Guide)

The urgency required to react to governments’ slow responses to legislating carbon footprint-reducing initiatives is now widely known. It is also quite easy to implement as the above examples have shown. For those new to the concept of carbon footprint, this introduction also empowers them to act on their own rather than wait for someone to tell them to or for more dire warnings to be made.