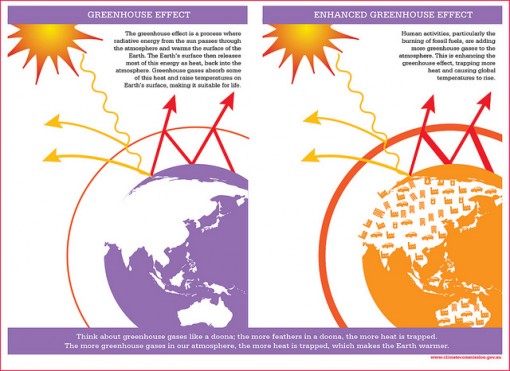 The ‘greenhouse effect’ is an atmospheric heating phenomenon in which the Earth experiences rise in temperature because certain gases (water vapor, carbon dioxide, nitrous oxide, and methane) in the atmosphere allow incoming sunlight to pass through but trap heat radiated from the earth’s surface. If these gases wouldn’t trap heat in the atmosphere, the temperature of the earth would be about 33 degrees centigrade colder on average. Because how these gases warm our planet, they are called as greenhouse gases and the effect they create in the atmosphere is called as greenhouse effect.

The greenhouse effect, although it sounds scary, is perfectly natural and normal. It is simply the name given to the process whereby certain naturally occurring gases in the Earth’s atmosphere retain some of the thermal radiation that reaches Earth from the sun. The main gases that are termed ‘greenhouse’ gases (GHG’s) are: Ozone, Carbon dioxide, Nitrous oxide, Water vapor and Methane. All of these are naturally occurring.

I honestly don’t know, but if America continues to refuse to reduce its greenhouse gas emissions, I see a bleak future not only for American society, but for the world as a whole. This is a global problem that is not going away, and the United States is an obstacle to solving it.
-Peter Singer

So, What is a Greenhouse?

A similar phenomenon takes place in a car parked outside on a sunny day. The car’s windows let the incoming solar radiation come in and heat the car’s interiors but doesn’t allow outgoing thermal radiation to escape through it.

Earth receives most of it’s energy from called radiation from sun. The incoming solar energy has a very short wavelength and passes through the atmospheric gases unaffected to reach the earth’s surface. About 30 percent of the sunlight that beams toward Earth is deflected by the outer atmosphere and scattered back into space. The rest reaches the planet’s surface and is reflected upward again as a type of slow-moving energy called infrared radiation.

The earth’s surface absorbs the solar energy and releases it back to the atmosphere as Infrared radiation, some of which goes back into the space. Now some of the IR radiation emitted by the earth is absorbed by the gases such as water vapor, carbon dioxide and methane in the atmosphere. That’s what keeps our planet warm at 59 degrees Fahrenheit, on average for human race to survive, according to NASA. With the increase of GHG’s in the atmosphere, more heats gets trapped, which increases the Earth’s surface temperature and that results in global warming.

Causes of  the Greenhouse Effect

Although the greenhouse effect is a natural phenomenon and is one of the reasons that life can exist on Earth (as greenhouse gases keep the surface of the Earth warm enough for us to live here: without them the Earth would be about 33 degrees centigrade colder on average, rendering many places inhospitable), the greenhouse effect is getting worse. This is having knock on effects, causing problems such as global warming, where the average temperature of the Earth is steadily rising over the years.

Fossil fuels, such as gas, petroleum and coal, are carbon based compounds that have existed in the Earth’s crust for many millions of years. They have been created as a result of the decomposition of organic matter such as plants and even the dinosaurs that lived on the surface of the Earth hundreds of millions of years ago. This carbon, therefore, has been stored within the surface of the Earth in various states – solid, liquid and gas, in fact – and have not been released into the atmosphere until recently.

However, since we have started using fossil fuels for our cars, electricity and heat, for instance, we have started pouring out thousands of metric tons of carbon dioxide into the atmosphere each and every year. The burning of fuels like coal, oil, wood, gas produce carbon dioxide which is released in to the atmosphere. The carbon that was once contained within the Earth, therefore, is being released into the atmosphere, and this carbon dioxide, as previously stated, is a greenhouse gas that causes the heat of the sun to be kept in the Earth’s atmosphere. CO2 is one the gases primarily responsible for the greenhouse effect. Waste material produced from factories and industries which contain toxic substances is dumped in the open air which produce harmful gases. Burning fossil fuels, therefore, is directly contributing to the greenhouse effect, and in a big way.

As odd as it may sound, farming may be drastically contributing to the greenhouse effect. Basically, because the demands of farming are now so great – the fact that there are so many people on Earth who all want food and drink, for example – even more animals are being kept on farms to provide both of these things. Amongst the most commonly farmed animals are cows. Problematically, however, cows release methane gas – one of the main greenhouse gases – into the atmosphere very regularly. How? By farting! And with so many millions of them living on Earth right now, an awful lot of extra methane gas is being released into the atmosphere every single day, contributing to the greenhouse effect.

Humans breathe oxygen in a carbon dioxide out; plants do exactly the opposite. In fact, carbon dioxide is a key element in photosynthesis. Trees and plants take in a lot of the carbon dioxide from the air and give back oxygen, making things balance in the atmosphere. After all, we do need greenhouse gases and the greenhouse effect in order to be able to live on the Earth, but we do not need too much, otherwise the Earth will start heating up too much too quickly.

Unfortunately, however, because we are cutting down so many trees every year and either not replacing them at all or not growing enough new trees, these plants cannot help to regulate the amount of oxygen and carbon dioxide in the atmosphere. This means that there is more carbon dioxide than ever before in the air and it is contributing greatly to the greenhouse effect.

Deforestation, on the other hand contributes effectively towards global warming. Due to increase in real estate projects and new new development, more trees are chopped off daily. Trees maintain balance of the environment as they intake carbon dioxide and release oxygen. Since, the growth of new plants doesn’t happen at that rate at which old plants are chopped off, the result is that are fewer trees to perform left to maintain ecological balance.

Increase in population has further taken toll on the environment. With the rise in population, the demand for fuel, oil, gas, house, transport also increases. All these in some way or the other raises the CO2 level, which in turn increases global warming.

How Does the Greenhouse Effect Work?

The greenhouse effect is a relatively simple process to understand. It starts with the sun, many millions of miles away from Earth, and the thermal radiation that it gives off.

Once the thermal radiation penetrates through the Earth’s atmosphere, it hits the surface and heats it up. As the surface of the Earth heats up, so does the air around it, causing it to rise (because heat in normal situations rises).

However, not all of this gets all the way back out into space. Some of the heat is actually trapped, either by clouds that are formed from water vapor or by other greenhouse gases such as methane, carbon dioxide or nitrous oxide (to name a few). This is then contained within the atmosphere and bounces back and forth between the greenhouse gases that keep in trapped and the surface of the Earth. This causes a heating of the air nearest to the Earth, which is part of the reason that we are able to survive.

However, it is also becoming a problem because the Earth’s surface is getting too warm. The polar ice caps, for instance, are starting to melt, which does not only mean that the animals that use them for their shelter and their food are in danger, it also means that those humans living on low lying land could be in trouble when the sea levels start to rise and threaten their livelihoods.

Why Greenhouse effect is Important?