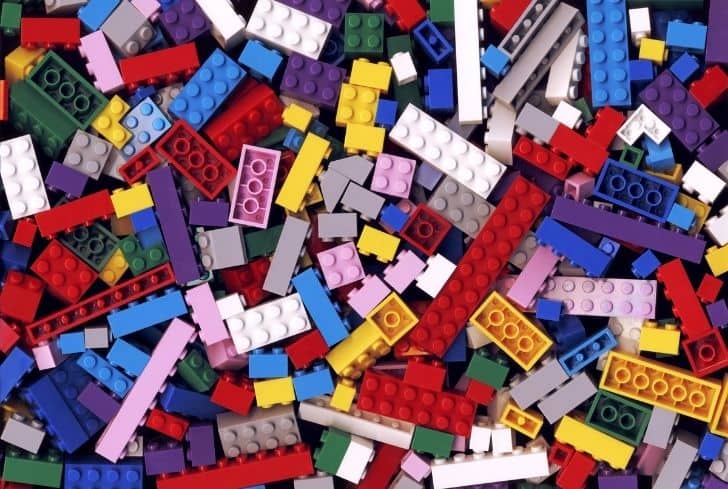 When you think of toys, what comes to your mind is innocence. Toys are playthings for children and typically do not bear any visible hazards. But, for Legos, this isn’t the case.

For children, Lego bricks are quite the rave. But what happens when these children grow up and lose interest? What happens to the mass of Lego bricks they’ve left behind in their childhood? Do they go to a bin filled with Lego bricks, or are there environmentally friendly ways to dispose of them?

This is what this article is all about. In it, we look at Legos and why they are a big deal. We will then consider whether they are recyclable, biodegradable, and sustainable. Finally, we also consider ways to dispose of old Lego bricks.

What Is Lego, And Why Is It a Big Deal?

Lego is a popular building toy created by a Denmark company called the Lego Group. Also, Lego is the brand name of the Lego Group. “Lego” is coined from “leg” and “godt,’ two Danish words meaning “play well.”

Its bricks comprise sets of colorful interlocking plastics serving as building blocks. These bricks come in different sizes, shapes, and colors. You can then make them into a house, tower, or any building of your choice, plant, car screens, wheels, vehicles, and robots. There are studs on the top of the bricks which join the bricks together. There are also holes at the brick’s bottom, typically called “brick and knob connection.”

Today, millions of Lego fans and conventions are scattered worldwide, as it still retains its goodwill since the 1930s when the Lego Group started. This means that Lego is a big deal. So, why is this important?

Lego bricks are made from plastic, but the kind of plastic varies. Within 1949 and 1963, the polymer in use was cellulose acetate. This is the same plastic frames we see in most eyeglasses today. Now, imagine the millions of fans and the generations of children who have used Lego plastics.

This has raised concerns, especially considering the environmental hazards you can associate with the use of plastics generally. But, as we will soon see, Legos are made from a different kind of plastic, and this makes environmental sustainability efforts in this regard a bit tricky.

But recycling has always been the go-to option for environmental protection. So, are Legos recyclable?

Can You Recycle Legos?

Yes, Legos are recyclable, although most arguments seem to favor the narrative that Legos aren’t generally recyclable. Don’t worry; we will explain the logic.

Acrylonitrile is the first monomer, and it makes for strong bricks. Butadiene is the second polymer, and it gives the bricks resilience. Styrene is the third element that gives the bricks the shiny, hard texture. Lego mixes these three polymers with colorants, after which they get polymerized or hardened using potassium peroxydislphate. ABS-based materials are generally difficult to recycle, and as such, recycling centers often reject.

However, to say Legos aren’t recyclable is to narrow down the idea of recycling, which is merely reusing waste materials as new products. By implication, recycling isn’t only about shredding and sorting of waste or old materials. So, while one may not take old Legos to recycling centers, they can be recycled through reuse. This is what the Lego Group and many organizations are doing with Lego.

In 2019, Lego, via its LEGO Replay, launched a recycling initiative that seeks to reuse old Lego bricks. Each brick gets cleaned, rearranged in a new set, and sent to organizations, schools, and persons who need them.

But Lego Group is not only in the business of recycling Lego. There are other organizations like Brick Recycler, which accept mismatched sets and sorts and cleans them up. It then sends to persons who need them, such as foster care children, hospital patients, and needy kids. There are also Brickdreams and The Giving Back.

No, Legos are not biodegradable. This is a result of the ABS, which makes up 80% of them. ABS is even more toxic than regular plastics, which take 100 to 1000 years to biodegrade. Although Legos are made with other plastics, the case isn’t so different as ABS won’t biodegrade, and other plastics might take centuries to decompose finally.

It is interesting to note that an attempt was made in 2018 to create plant-based toys derived from sugar cane, which will be biodegradable. The drive to develop this product could not be sustained, considering the volume of materials you can create from one sugar cane. It simply couldn’t match up or replace the high demand for ABS materials. As such, Lego is not biodegradable.

No, Legos are also not sustainable. This is because they mostly come from a very toxic kind or type of plastic. Studies show how Legos have been thrown away as trash and end up in landfills, which bear serious environmental concerns.

This is because the materials used in producing Legos do not biodegrade, and even where they do, they take centuries. Along the line, these plastics become microplastics, which are hazardous to the human environment, polluting and killing marine life. Even birds sometimes mistake them for food.

See also  Can You Recycle T-Shirts? (And 10 Ways to Reuse Old T-Shirts)

In turn, this realization had led the LEGO Group to push for environmentally friendly initiatives such as the plant-based LEGO materials, which only cover 2% of all the plastic material Lego needs. These elements derive from polyethylene, a flexible, durable, and soft plastic that, when added with ethanol, is a conventional plastic that is both recyclable and biodegradable.

Regardless of these moves to create a “green” outlook for the Danish company, the continued use of plastics – an all-time sustainability challenge – combined with the heavy demand for regular plastics, prove that Lego might be unsustainable for a long time.

Can You Recycle Legos For Money?

Note, however, that the recycling here is limited to cleaning and sorting the Legos alone and does not involve shredding or other mainstream recycling options.

How to Dispose of Old Unwanted Legos?

When you are done with a Lego, you will need to dispose of it. So, how best can you do this?

1. Gift it Out to Friends & Family

As adults grow out of their childhood fantasies, abandoning toys become causal. However, rather than leave them to waste away, why not gift them out?

Passing down Lego sets from generation to generation is a great way to optimize Lego’s durable nature. This is no doubt an environmental-friendly and humane way to dispose of such potentially hazardous material.

You can also donate to schools, orphanages, or children foster care. Many schools are dealing with inadequate materials to teach, and sometimes its students share few available Legos. Donating to schools will be a worthy cause.

Also, as part of efforts to recycle used Legos and widen access to its toys, LEGO Group announced a program to donate all previously used Lego bricks to children in different parts of the world. This creates easy access to donate your Lego instead of trashing it.

Using the US Lego Reply, for example, what you need to do is pack up in cardboard, after which you print out your free UPS shipping label through Replay’s page.

These packages are then sent to Give Back Box’s facility. Here, they inspect each piece, clean them by hand, and then send them off to Teach for America and Boys and Girls Clubs of Boston. This was recently launched in Canada.

The idea here is to make extra cash from unwanted Lego bricks. Some bricks are worth hundreds of dollars, while others are worth only a few dollars. The difference is your bricks’ quality and how much you know of that line of business.

The basics include knowing what LEGOS you want to sell, your track record in that business, and knowing where to sell Lego bricks for the more money. We’ll be sharing five useful steps along this line.

First, before you begin to sell, start by assessing your legs to determine the condition. The conditions typically include whether they are new or have never been put-together, whether they have been highly used, heavily used, sealed in the box, or sealed in a damaged box.

Secondly, research your Legos. This is because Legos come in collections, mini-figures, and sets. If you’re unsure what you have, check up your Legos for the part number and look them up online to cross-check.

Third, look at for imperfections as they affect the value of your Legos. You are also likely to give an accurate description when you’ve noted an imperfection. Examples include cracks, wear, scratches, loose hinges, deteriorated stickers, cleanliness, discoloration, and much more.

Fourth, when you’re packaging your Legos, sort the pieces by color or shape. You can list individual materials such as jewels individually.

Fifth, consult Lego’s price guide on how much to sell your Legos. Keep in mind that you automatically appear honest when you give a fair price. You can consider BrickLink, their price guide display shows historical prices from six months back.

Similarly, Brickset is a good option as it lists out manufacturer’s suggested retail prices. It also shares information about how rare a Lego brick or set is and other hints on its value. eBay Search your Lego part number and see how similar Lego products are doing.

Finally, use a very good camera to highlight the Legos’ details to make your offer appear more credible. After this, browse for the best platforms to push the sale.

Legos have been around for a very long time, and they don’t seem to be going anywhere soon. Admittedly, Legos pose severe environmental concerns as they are generally non-biodegradable and unsustainable.

Still, you can recycle them. However, remember that Legos do not go through the mainstream recycling of shredding but only sorting, cleaning, and repackaging. It thus presents a possibility of zero Lego waste. As we have shared in this article, you can even go beyond recycling and apply it to a wide variety of use.