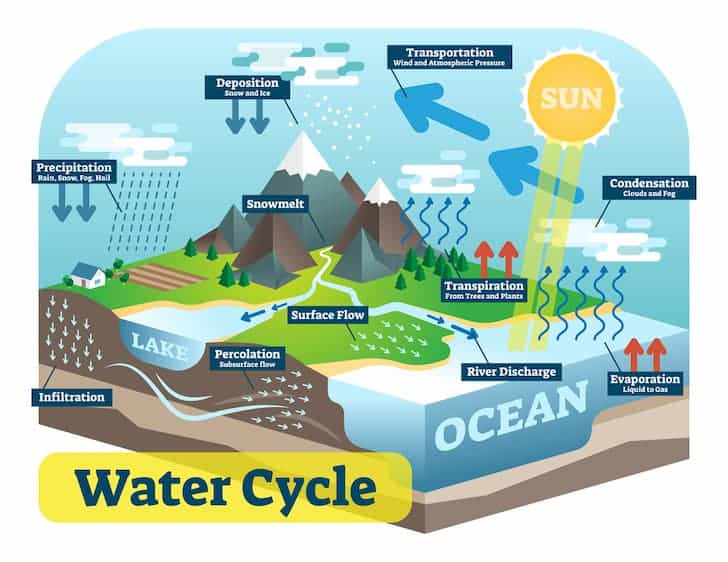 The water cycle is the continuous movement of the water all around the Earth. The water cycle is like a big circle and doesn’t really have a starting point. There are 4 main stages involved in the water cycle, i.e., evaporation, condensation, precipitation and runoff. So, how does this cycle works? When the sun shines, the water from the ocean or lake evaporates due to heat from the sun.

When water evaporates, it turns into water vapor and goes up into the atmosphere. This water vapor gets together with other water vapor and turns into a cloud. When clouds get dense, they drop the water back to Earth in some form of precipitation like rain, snow, hail or sleet. When the water falls back down to the Earth, they find their way on the ground surface into puddles, streams and rivers. Again this water will evaporate, and the whole cycle will start again.

Water is one of the world’s most valuable resources and one that is becoming increasingly difficult to find in drinkable quality. All water in the world is subject to what is known as the water cycle, or the hydrologic cycle, or the H2O cycle, which is the process by which water moves around the world.

Let’s have a look at different states and the importance of the water cycle.

Different Stages of the Water Cycle

Water goes through three different stages in the water cycle. It can be a liquid (water), a gas (water vapor) or a solid (ice). These three states are interchangeable, as water can freeze into ice or evaporate into water vapor, water vapor can condense as water, and ice can melt into water. The water cycle consists of a number of steps that see the water go through each of these states.

Water is found in lakes, oceans, swamps, and soil, as well as in all living creatures and plants. When heat is applied from the sun, through exertion, or by artificial means, the water molecules become excited and spread out. The loss of density is called ‘evaporation,’ and it sees the water rise into the air forming clouds of water vapor.

Normally, the evaporation of water occurs when the water hits the boiling point, around one hundred degrees centigrade.

However, in places where the air pressure and humidity are lower, far less heat energy is needed to evaporate the water because there is less pressure holding the water molecules together. The water that evaporates from the oceans is not salty, as the salt is too dense and heavy to rise with the water vapor, which is why water from rivers and lakes is not salty.

See also  What are Various Types of Geothermal Power Plants?

Snow and ice can actually turn into water vapor without first turning into water. This process is called ‘sublimation,’ and it results from low humidity and dry winds. This usually occurs at the peaks of mountains or other high-up places, as the lower air pressure means that less energy is needed to sublimate the ice into water vapor.

Some of the highest peaks on the earth, such as Mount Everest, have all of the necessary components for sublimation, namely: strong sunlight, low temperatures, low air pressure, strong wind, and low humidity. If you’ve ever seen dry ice, which has a fog pouting off of it, this is an example of sublimation in action.

When water evaporates off of a plant’s leaves, the process is known as ‘evapotranspiration.’ A large percentage of the water in the atmosphere is produced by this process due to the large areas covered by plants and trees across the planet. While about ninety percent of the water vapor in the world comes from lakes, oceans, and streams, the remaining ten percent is comprised of the various plant life around the world.

The water vapor that has risen into the sky cools significantly when it comes into contact with the cooler air found up high. The vapor becomes a cloud, which is pushed around the world by moving air currents and winds.

If the water vapor cools to anything above zero degrees centigrade, it will condense as water. Essentially, the water vapor will start to condense on the surface of tiny particles of dust and dirt that rose with the vapor during the process of evaporation. These tiny droplets will start to fall into one another and merge, producing a larger droplet.

When a droplet is large enough, gravity will pull it down at a rate that exceeds the updraft in the cloud, leading to the droplet falling out of the cloud and onto the ground below. This process is called ‘precipitation’, or – more commonly – rainfall.

If precipitation occurs in conditions that are particularly cold or have very low air pressure, then these water droplets can quite often crystallize and freeze. This causes the water to fall as solid ice, known as hail, or as snow. If the conditions are in between those associated with snow and rain, the droplets will fall as icy cold, half-frozen water commonly referred to as sleet.

The water that has fallen as rain is absorbed into the ground through a process known as ‘infiltration.’ Soil and other porous materials can absorb great deals of water this way, while rocks and other harder substances will only retain a small amount of water.

When the water infiltrates the soil, it will move in all directions until it either seeps into nearby streams or else sinks deeper into what is known as ‘groundwater storage.’ This is where the water that does not seep out or evaporate joins up under the ground, saturating the smallest nooks and crannies of rock and soil under the ground. These formations are also known as ‘aquifers’ and explain why sometimes the ground underneath the topsoil is damp or sodden.

When an aquifer becomes too full, it starts to leak out onto the surface, forming what is known commonly as a ‘spring.’ These can often be found in formations of porous or brittle rock, which can crack following slightly acidic rainfall. Should the water be located near a volcano or any source of natural thermal energy, it will form a hot spring.

After the water has fallen and the soil has become saturated, or the snow has melted, the water follows gravity and falls down any hills, mountains, or other inclines to form or join rivers. This process is known as ‘runoff,’ and it is how water comes to rest in lakes and returns to the ocean. The waterfalls according to the incline of the place from which it is falling, and when several threads of water meet, they form a stream.

The direction in which the water moves is known as ‘streamflow’, and it is central to the concept of the currents within rivers and streams. These streams and rivers will run off eventually to either form lakes or rejoin the ocean, depending on their proximity to the ocean.

Due to the amount of water stored in snow or ice, a sudden increase in the heat can lead to flooding due to the water suddenly melting and running off at an alarming rate. This is why flooding can occur so easily during a warm spring following a particularly cold and biting winter.

When more snow falls than evaporates or sublimates, the ice will compact densely to form what is known as ‘ice caps.’ The ice caps and glaciers located in the coldest regions of the world are the biggest collections of ice in the world, and are slowly starting to shrink as the water in which they sit is becoming warmer.

This happens in a cyclical manner, with no beginning or end. As precipitation happens in one part of the world, evapotranspiration is happening somewhere else. The cycle of water never ends, which is why the oceans stay level, there are always clouds somewhere in the sky, and drinkable water doesn’t suddenly just run out.

At some point, any water that has infiltrated will be released, any that has joined the ocean will evaporate, and even a large portion of the ice caps may melt, releasing water that has been stored for millions of years back into the water cycle with potentially cataclysmic effects.

The Importance of the Water Cycle

1. We cannot live without freshwater

All life is dependent upon water. Water makes up 60 to 70 percent of all living matter, and humans cannot live without drinking water for more than a week. The water cycle is an extremely important process because it enables the availability of water for all living organisms and regulates weather patterns on our planet. If water didn’t naturally recycle itself and distribute freshwater all over the earth’s surface, we would run out of clean water, which is essential to life.

Freshwater seems abundant, but when accounting for all the water on Earth, it’s in limited supply. Just three percent of the water on our planet is freshwater. A majority of this water, about two percent of the world total, is contained in glaciers and ice sheets or stored below ground. The remaining one percent is found in lakes, rivers and wetland areas or transported through the atmosphere in the form of water vapor, clouds and precipitation.

Evaporation and infiltration benefit human, animal and plant life by purifying water. When water evaporates, the pollutants and sediments in it are left behind. As water undergoes infiltration, the ground purifies it of pollutants and contaminants. Glaciers, ice, and snow can act as stores of freshwater for both humans and other organisms. Even aquatic life needs water purified, as saltwater must be within certain pH and saline ranges.

Perhaps most important, the water cycle distributes water all over the earth’s surface, though unevenly. This is important because if water was not distributed, gravity would push it all into the lowest place, the oceans. The water cycle continually feeds freshwater to all life on the planet: humans, animals and plants. Runoff contributes to rivers, other freshwater bodies, and eventually, the ocean, sustaining freshwater and marine life.

Plants wouldn’t grow without precipitation and therefore anything consuming the plants wouldn’t survive and so forth.The water cycle process sustains life and creates the ecosystems around us. Some organisms are very sensitive to changes in the water cycle. A prolonged drought can destroy a population of plants or a certain salamander species may require a set amount of soil saturation in order to avoid desiccation.

The water cycle patterns and rainfall have major effects on Earth’s ecosystems. Rainfall and surface runoff play important roles in the cycling of various elements, also known as the biogeochemical cycle.

In ecology and Earth science, a biogeochemical cycle or substance turnover or cycling of substances is a pathway by which a chemical substance moves through biotic (biosphere) and abiotic (lithosphere, atmosphere, and hydrosphere) compartments of Earth.

The water cycle is powered from solar energy, and 86% of the global evaporation occurs from the oceans, reducing their temperature by evaporative cooling. Without the cooling, the effect of evaporation on the greenhouse effect would lead to a much higher surface temperature of 67 °C (153 °F) and a warmer planet.