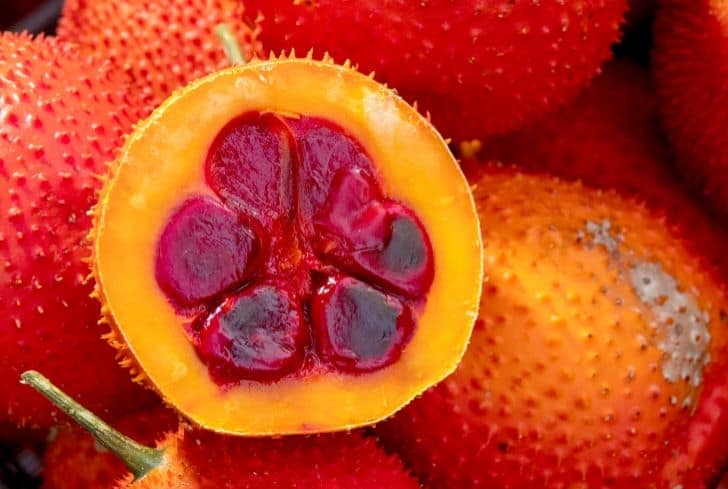 Melons are tasty and beautiful fruits that grow on vines sprawling across the ground. Belonging to the Curcurbitaceae family, Melon trees can be held upright with some support. While you cannot conventionally call them attractive, they are still incredibly popular for their sweet fruits.

These trees have been grown for the last 4,000 years and since inception, they’ve served as a vital food source for the Africans and Egyptians. There are multiple variants of Melons with different tastes and appearances. However, almost all of them are easy to grow and maintain.

In this article, we will discuss in detail the 15 commonly found types of Melons.

Regardless of where you live, you probably familiar with Watermelons. Native to the African regions, these fruits have been produced and consumed for several thousand years.

As of now, at least 1,200 regions cultivate watermelons that produce fruits ranging from six to fifty pounds. Interestingly, these watermelons come with similar features including their solid outer rind and the relatively soft interior flesh.

As with most other melons, Watermelons have a drastically high-water content up to a whopping 90%. This is also the reason why they are called Watermelon in the first place.

The high content of water makes it one of the most delicious and wide sought after snacks during the warmer months, and due to the large size, it will continue being cool even after you remove it from the refrigerator.

Watermelons, in general, are an extremely popular fruit, and given this wide popularity, they are cultivated across the globe. China, for instance, accounts for 70% of the total watermelon production across the globe.

It is closely followed by other temperate regions of Brazil and Turkey. The United States too isn’t far behind when it comes to watermelon production.

Around 40 states of the nation are known to produce commercial variants of watermelons that can conveniently grow and thrive in a wide range of climates. While watermelons thrive best in temperate or hot climates, they can still be grown in moderately cold areas.

While growing watermelons it is important to check the quality of the soil. Ideally, you should grow the fruit in a well-draining soil as the fruit is not tolerant enough to grow and thrive in soggy conditions.

You can also grow them on heavy, hairy vines that primarily trail around the ground. This produces dense foliage and pale greenish flowers during the warmer months of July and August.

Watermelons, however, are still widely sought-after by gardeners as they grow quickly and are easy to maintain. Watermelons require a fairly long time than other melons to achieve maturity. In most cases, they fully thrive only after 90 days.

Native to the Middle Eastern region, Ananas is a variety of muskmelons. They have an oval shape and feature a relatively netted rind which is almost similar to Cantaloupes.

Unlike watermelons, their interior flesh from a light shade of off-white to a light shade of orange/occur yellow. These plants are also widely popular for their elongated seed cavities. When it comes to taste, Ananas is incredibly sweet. In certain instances, they may also have a mild spicy flavor almost resembling the pineapple.

Alternatively known as the Christmas Melon, Frog Skin melon, and even Santa Claus Melon, the Camouflage Melon is primarily found in Australia. Given their similarity to the frog skin, Australians also call them croc-melons once in a while.

However, despite being widely produced in Australia, these melons are native to Spain. Available in a shade of green and brown, these melons often resemble the skin of amphibians, thus the name.

The interiors of the Camouflage Melon, however, resembles the creamy off-white texture of a honeydew. They are both beautiful and extremely tasty.

Two kinds of melons are widely termed as Cantaloupe. These include the European and the North American Cantaloupes. Among them, the former was cultivated during the early eighteenth century in the Cantalupo region of Italy.

This is also the place where they have derived the name. The European Cantaloupe features a grayish skin with vertical white stripes. Like the conventional cantaloupes, it is often termed as the True Cantaloupe.

Both the European and the North American cantaloupe have a sweet, orangish flesh resembling that of a Papaya. Given their sweet taste, these fruits are often consumed as breakfasts, fruit salads, and even desserts.

The vines of Cantaloupe produce bright yellow flowers during the warmer months. They also feature stunning foliage that varies from dark greenish to cream depending on the season when they are cultivated.

Native to the United States, the Casabas are popular since the early 1800s. They are also deemed to be a close cousin of the Honeydews and the Cantaloupes. Usually served in fruit platters and salads, the flavor of these melons resembles that of a cucumber. The best part: you will find them both during summers and winters.

Casabas have a fairly long shelf life and they transform into a yellowish hue upon ripening. These plants also have a fairly smooth skin and feature wrinkled, elongated furrows.

While they are relatively less popular than the more conventional forms of melons, you can grow Casabas at any time throughout the year, as per their origin country. You can even enhance the flavor of the fruit by adding a dash of lemon to it.

Native to Israel, the Galia Melon is a hybrid melon between the Honeydew and the Cantaloupe. These melons are usually round with a highly nettled rind and a mildly spicy flavor.

Currently, the Galia melon is cultivated across the globe in the warmer climates. It is primarily found in South America, the United States, and Europe.

Belonging to the family of Musk Melons, Canary Melons are bright yellowish melons with a tangy and sour taste. Its flesh has a pale greenish hue with a fairly soft texture when it is ripened. The canaries are oval and larger when after maturing. The vines of these plants may trail or creep, producing beautiful yellow flowers during Spring.

The plant takes around two and a half months to grow fruits and is widely found in Asian and South American regions. They are widely used in fruit salads and as a common breakfast staple.

Popularly known as Pare in Indonesian regions, the Bitter melon is known to originate from the Indian subcontinent. Its vines are also widely grown across Asian, African, and Caribbean regions. As evident from the name, these melons are extremely bitter and are therefore eaten as a vegetable instead of a fruit. The Bitter melon is also rich in antioxidants and is known to boost one’s immunity.

This is one of the rare melons that is widely popular for its fragrance and not taste. Unlike other melons, the Charentais Melon has a sweet and refreshing fragrance. Having originated in France during the early nineties, these Melons are widely manufactured in the North African regions.

While its production is more or less limited in the United States, you will still find them in some grocery stores in the Southern US states. These fruits are perfectly round with a light greenish hue and darker greenish horizontal stripes across the body. The flesh is also bright orangish in color.

Found in California during the early 1900s, the Crane Melons have a beautiful orange flesh and are known for their incredible freshness and sweet taste. As with several other melons featured in this list, Crane Melons are usually a kind of hybrid from Persian, Japanese, and the Ambrosian variants of melons.

These melons derive their name from their unbelievably long shelf life. While they are primarily cultivated during the warmer months, the Winter melon is still ideal for consumption during the winter months. Its spectacular longevity is credited to the waxy skin and that ensures the inner flesh is fresh and juicy all year round. Note that the skin completely develops only after the fruit is ripe.

See also  Can You Compost Cheese? (And Cheese Wax?)

As with many other variants of melons, the Winter Melons feature a dark greenish exterior resembling watermelon. Their flesh is pale orange and heavily seeded.

Fruits derived from the vines of winter melon are popular for their large structures and they often weight up to and more than 40 pounds. Winter Melons are also known to produce beautiful yellow flowers with dense foliage.

Weighing up to a whopping 3 kgs, these melons are round-shaped fruits with a webbed greenish and yellowish tinge. Their flesh is both sweet and refreshing and their texture is usually chewy. Ideally, it takes around two months or more to successfully cultivate a Sky Rocket Melon.

Primarily found in the Southeast Asian regions, these melons are best known for their short harvesting period and expensive price. As you’d probably guess from the name, these melons are extremely sweet and completely round in shape.

With more than 20% of sugar content, the Honey Globes are also one of the tastiest and sweetest melons available. Their rind is thick with white or greenish marks. Their flesh, on the other hand, is white, soft, and juicy.

The Honey Globe Melon can weigh up to a whopping 10 pounds and unlike several other variants of melons, you need to cut them from the vine to harvest them. This usually happens due to the super thick stem that keeps the fruit duly attached to the vine.

Alternatively known as the Vietnamese melons, the Gac Melons originate from Vietnam. You will also find them in several other places across the globe including regions of Australia, China, and Asia. Gacs are oval with a measurement of up to five inches. They feature a spiked red or orangish rind.

The inner fruit of gacs is made from two different parts and both can be consumed. Gacs are primarily used as a vegetable owing to their unique taste. They are not as sweet and often resemble the taste of avocados. This is also the reason why these melons are widely used while making soups, stews, and curries.

This is yet another unbelievably sweet variant of Melon. Like many other melon variants, Autumn Sweets have a round shape, weighing up to a whopping 1.3 kgs. Their skin has a golden yellowish hue and their flesh is primarily white. Autumn Sweet melons are extremely sweet and their texture is both tender and watery.

Well, now that you have a detailed insight into what Melons are, what are you waiting for? Take your pick and grow them at home to enjoy ripe, sweet melons all year round!