What are Ivy Plants?

Belonging to the Hedera Genus of the Ginseng family, Ivies are beautiful plants defined by their variegated leaves and aerial roots. While there are multiple variants of Ivy plants, the English Ivy stands out as the most common type. This variant of the plant is widely found across brick walls, with wide stems bearing three to five lobes.

When the stems finally reach the top for complete support, these plants become horizontal or start hanging. Ivies are native to the European parts, though you will find some variants in Asia.

Several types of Ivy are widely cultivated by home gardeners. This is primarily because growing the Ivy plant is an extremely simple affair. They do not have any specific requirements in terms of soil and can effectively withstand a large amount of shade. This makes it even easier for gardeners to plant the Ivy under large trees.

While strong light usually hinders the growth of Ivy, some variants do equally well in both light and shade. Given their easy maintenance requirements, you’re probably considering the prospect of growing Ivies at home. So, in this article, we will discuss 13 different types of Ivy plants that can be easily grown in your home gardens. 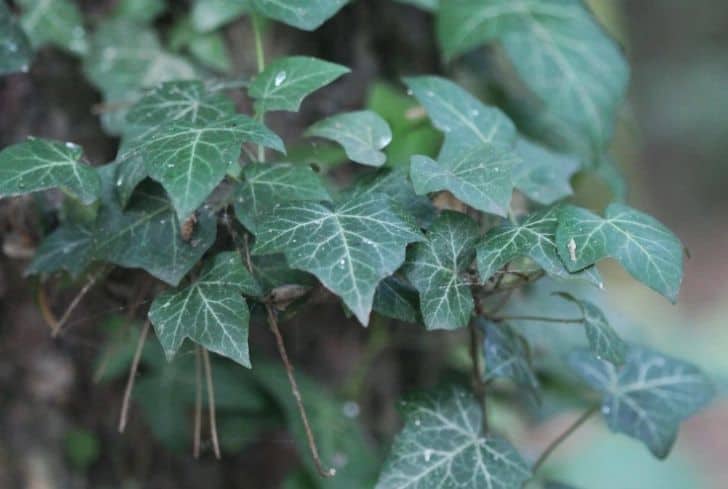 Also known as the Canary Island Ivy, the North African Ivy thrives well in hardiness zones ranging from 6 to 10. This Ivy has a leathery and almost lobed appearance with stunningly glossy dark green leaves. The North African Ivy is also known to have hardy stems with a dash of reddish tinge on them.

If you are planning to grow the North African Ivy at home, note that they thrive best in moist soil. These species of Ivy can also tolerate the direct sunlight when compared to English Ivy, which they are often related to. They grow significantly faster and with their beautiful foliage and solid stems, they are one of the best choices as a groundcover. In some instances, you might also want to use them in containers or as hanging baskets.

There is, however, one major issue with growing this type of Ivy. Since the African Ivy is born in areas receiving plenty of sunlight, it does not fare much well in cooler climates. So, if you are planning to grow the African Ivy in a cool climate, consider moving them indoors in the colder months, else they may die.

See also  Does Roundup Kill Moss? (And on Bricks and Patio?) 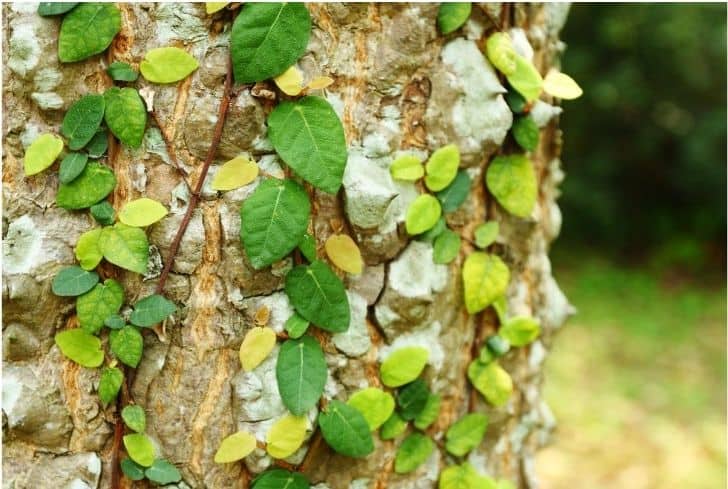 Our list of Ivy plants is probably incomplete without the English Ivy. These plants grow significantly fast they are available in two popular forms. The first is a juvenile form that tends to grow in lobed patterns with bright green leaves. These are also the variants of Ivy whose stems do not come with any flowers.

Another popular type of Ivy is the mature Adult Ivy that grows with stunning dark green leaves and stems. The mature Ivy bears greenish flowers with a tinge of white during the fall months. In the summer months, they bear yellow orangish flowers.

Ivies are often one of the top choices for winter gardens, and they assume quite a large shape going up to a height of whopping 30 feet. These plants are perennial, and they prefer full or partial shade. They are also extremely hardy, low maintenance, and resistant to animals like deer, rats, moles, and rabbits.

English Ivies thrive best in hanging baskets and they can also be used as groundcovers. Again, if you have an unattractive fence or wall, then too you might want to use this beautiful plant. 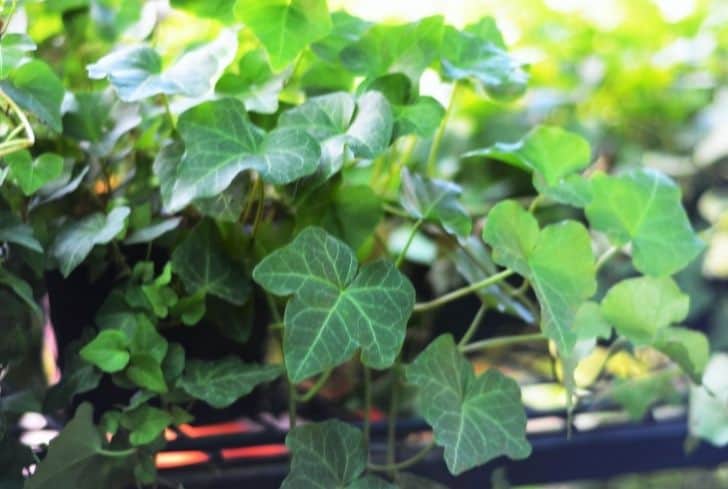 The Persian Ivy comes with stunning heart-shaped leaves ranging from 4 to 10 inches in length. Their defining feature lies in these leaves which are probably the largest when it comes to any Ivy plant. The leaves of Persian Ivy may be either variegated or boast solid colors, depending on the one cultivating it.

The plant can withstand several instances of drought, although it thrives best in a loamy soil. They are also significantly heated tolerant when compared to other variants of Ivy, though they perform really well in shaded areas.

Persian Ivies can grow vigorously fast, and this very growth might end up being a problem if left unchecked. That is why it is vital to closely observe the plant and prune it whenever necessary to prevent it from choking other plants in proximity. 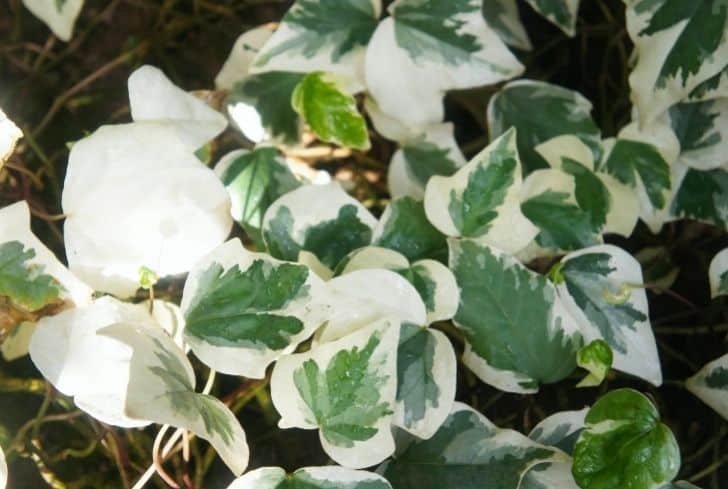 Algerian Ivies can grow up to a height of whopping 10 feet and assume a width of 3 feet. They come with beautiful, dark, and luscious leaves that resemble the shape of the heart. The leaves are around four to five inches across and they come with a perfectly creamy trim.

Overall, this plant is incredibly colorful, stunningly dramatic, and perfect for all kinds of trellises. You might also want to grow them at slopes and walls. Note that although the Algerian Ivy can tolerate some amount of drought, it still thrives best under full sun and partial shade. In the case of soi, you will need to ensure that it is consistently well-drained. 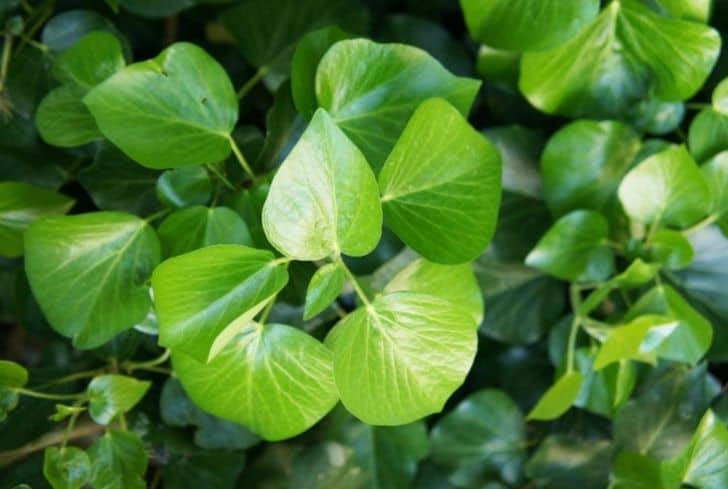 Popularly known as the Hedera Hibernica, the Irish Ivy comes with many similar traits as with the English Ivy. It also shares the same USDA hardiness areas and growing habits. Thanks to these similarities, the Irish Ivy is often confused with its English counterpart.

See also  Can You Compost Sand? (And Ways to Dispose of)

While the Irish Ivy is just as popular, it is still not grown in certain areas as people continue deeming it to be an invasive or noxious plant. Certain administrative departments even consider it a nuisance, taking up measures to get rid of it, every time it is spotted in a public encroachment.

Regardless of the reputation, homeowners absolutely love this variant of Ivy and it can be planted almost anywhere in your garden. The Irish Ivy is both low-maintenance and yet incredibly hardy.

Native to the East Asian region, the Japanese Ivy is found to be growing on slopes of rocks, tree trunks, and across woodlands. It is an evergreen plant and best known as a woody climber. Thanks to these qualities, the Japanese Ivy serves an excellent role as a groundcover in almost all vertical areas.

The unique aspect of the Japanese Ivy lies in their purplish stems and their glossy foliage. The leaves of these plants take the shape of a rhombus and they often produce small clumps of yellowish-green flowers that further develop into tiny berries. When cross-pollinated, the Japanese Ivy is likely to feature stunningly beautiful creamy streaks.

As evident from the name, this Ivy plant is native to Russian regions, though it can be found in parts of Armenia and Iran. Being an evergreen climber, the Russian Ivy can reach a height of up to a whopping 100 feet when it has ample support.

Unlike other variants of Ivy, it doesn’t tend to crawl and therefore won’t serve as an excellent groundcover. Instead, you can plant this Ivy near a lofty structure to which it can climb.

This Ivy thrives best in hardiness zones ranging from 7 to 12, though you can grow it in colder regions with precautions. The foliage of the Russian Ivy tends to be mid-green and stretches a heart shape that reaches a deep point. 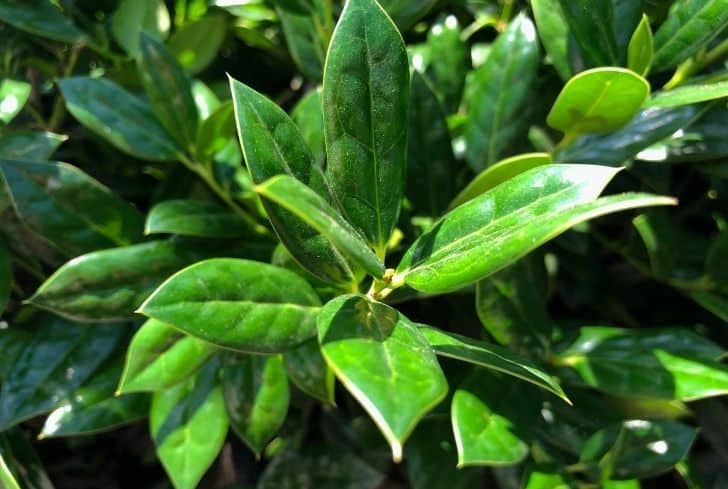 This is a variant of the English Ivy that comes with tiny leaves placed close to each other. The dark green leaves of the Needlepoint come with sharp lobes and a strikingly ornamental look. That is one of the many reasons why you would find the Needlepoint in hanging baskets or on stone walls where they stand out as a clinging vine. These Ivies can assume a height of up to 3 feet and they also look great in containers owing to their decorative nature. 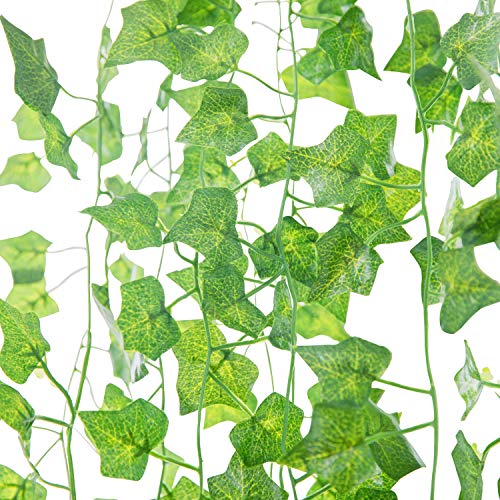 Also known as the Cape Ivy, these are wild Ivies that are found across the Californian coasts. If you are lucky, you might also find them in forests and wetlands. The major issue with German Ivies is that they cannot thrive in dry environments. So, if the area where you’re growing the German Ivy is dry enough they may end up dying. Luckily, they will also revive after the rains return, so you needn’t be as worked up about their early demise. 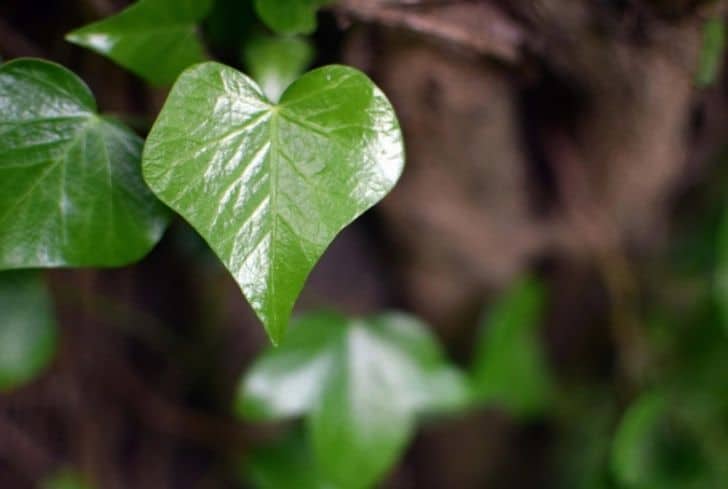 If you are looking to grow an Ivy that produces different varieties of flowers, the Bullock’s Heart Ivy might just be your best bet. Taking a height up to a whopping 40 feet, these Ivies thrive well in hardiness zones 6 to 9. Caring for the Bullock’s Heart Ivy is quite simple, and they do not require much maintenance throughout their lifetime. 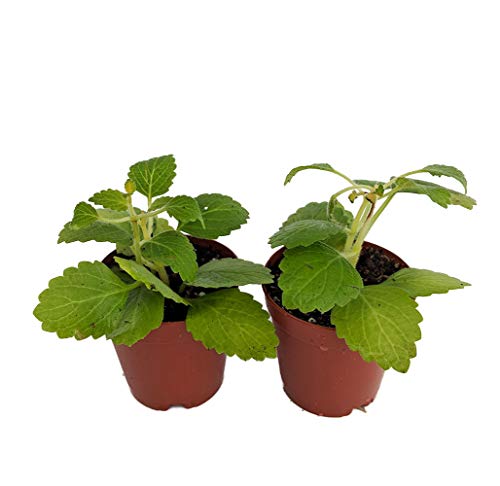 If you’re looking for an Ivy plant that’ll assume a lofty height, the Swedish Ivy may not be the one for you; otherwise, it is an excellent Ivy for anyone living in hardiness zones 10 and 11.

The Swedish Ivy enjoys partial shade and requires a consistently well-drained soil that is also humus-rich. It stands out with its erect stems, vibrant leaves, both of which make it an excellent groundcover.

The Swedish Ivy boasts trailing vines that can reach two to three feet and they serve better as a houseplant than a garden plant. You can keep them in a hanging basket or place them along decks and patios. Either way, they will not disappoint you! 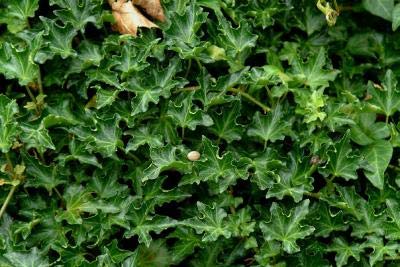 This is yet another English Ivy variant that will make one of the best houseplants. The Ivalace boasts shiny leaves that stretch up to one inch. Their leaf edges are quite curvy adding to its uniqueness. The Ivalace can assume a height of a whopping three feet and a width of four feet. Their leaves tend to have a cupped and lacy appearance.

The Ivalace is a fast-growing plant and makes an excellent houseplant, though you can use it as a groundcover in certain areas. While growing this plant at home, make sure it is duly sheltered from cold winds. Most of the time, however, it thrives well under full or partial sunlight. 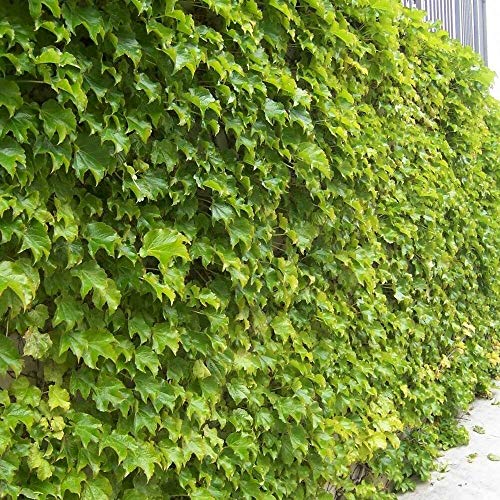 Since the Boston Ivy is not a part of the Hedera genus, it is not deemed to be a true Ivy. However, it is still popular as an Ivy Plant. Widely found in East African regions this plant actually belongs to the family of grapes.

Unlike true ivies, the Boston Ivy is a deciduous plant that tends to lose leaves right after bearing beautiful red and purple leaves. The Boston Ivy tends to produce clumps of green flowers, over time, which assume the shape and role of grapes.

While Ivy plants can light up any garden and are also easy to grow, you should consider some practical guidelines before proceeding to grow the plant. It is often deemed that the growth of Ivy is injurious to a set of trees. Although moderate growth isn’t a cause of concern here, you should still make sure your Ivy plant grows in a proper and reasonable boundary.