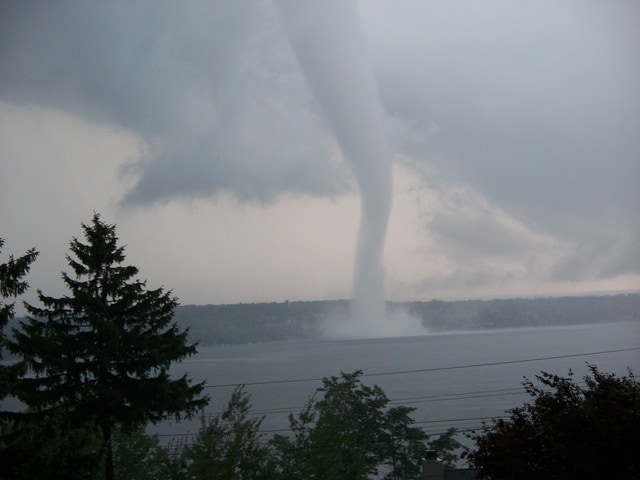 A tornado is a strong, turbulent column of air, moving fast and keeping in contact with the earth’s surface and a vertically formed cloud carrying dense water vapors, called the cumulonimbus cloud. Commonly, the tornadoes are shaped like a funnel, but the shape and structure can vary according to the climatic conditions. The bottom end of the vortex is surrounded by a cloud of dust and debris. Tornadoes are formed from the extremely large thunderstorms called supercells.

Tornadoes can be very destructive in nature with their speed ranging from 110mph to 300mph and can last to about 1-2 hours or 4 hours, in extreme cases, and can be as tall as 75 feet. Tornadoes also occasionally occur in south-central and eastern Asia, northern and east-central South America, Africa, North West and South East Europe, West and South East Australia, and New Zealand.  Most commonly, tornadoes are observed to occur in the Tornado Alley, ranging from the states of Texas to Iowa, in the United States. Except Antarctica, tornadoes can occur anywhere.

There are different types of tornadoes which are observed all over the world. Some of them are:

In such cases, there are two or more spinning columns of air around a common center.  These vortices often create small areas of heavier damage along the main tornado path. The vortices themselves rotate in the peripheral region of the eye of the tornado.

These are similar to waterspout tornadoes in terms of relative weakness, short lifespan, and a small, smooth condensation funnel which often does not reach the surface.  There is no rotating updraft – the spinning motion originates near the ground. They are usually weaker than normal tornadoes but can create winds which can cause serious damage.

They are similar to the normal tornadoes, of vertically rotating column of air. But they occur under clean skies and are very weak. They form when a strong hot updraft is formed near the ground on a hot day. A Dust-Devil tornado occurs when the sun heats dry land surfaces forming a twisting column of air. These types of tornadoes are commonly known as willy willy in Australia.

This type of tornado has a gust like vertical updraft of air. They are not connected with a cloud base. They are formed when cold dry updraft of air mixes with the moist cool air which is stationary resulting in a rolling effect. A Gustnado is short-lived and lasts from few seconds to minutes.

Tornadoes are cause by the thunderstorms being extremely large, unstable and with wind shear in the lower region of the atmosphere. Instability refers to the hot and humid conditions in the lower atmosphere and cooler conditions in the upper atmosphere. Due to the variation in the vapor pressure of hot and cool air, the hot air rises above and the cool air drops below. Wind shear refers to the changing of wind direction and wind speed increasing with height.

The formation of tornadoes is followed in a set pattern of simple steps. Firstly, when the thunderstorm approaches, the wind direction, speed changes in the upper area of the atmosphere and causes an invisible horizontal spinning effect in the lower region. Secondly, the horizontal air is tilted to vertical because of the rising hot air’s updraft. It eventually forms into a spiral with diameter ranging from 2-6 miles of rotating air. Thirdly, a rotating wall cloud originating from the center of the storm (eye of the storm) is formed as the base cloud. This region is rain-free. Just moments later, a tornado is formed and it starts revolving around violently at high speeds and cause havoc.

Tornadoes are very dangerous and if you are around one, you should probably take cover and wait. Tornadoes are very exciting to watch too, but always be safe while watching a tornado as everybody cant be a storm chaser with all lucky stars!