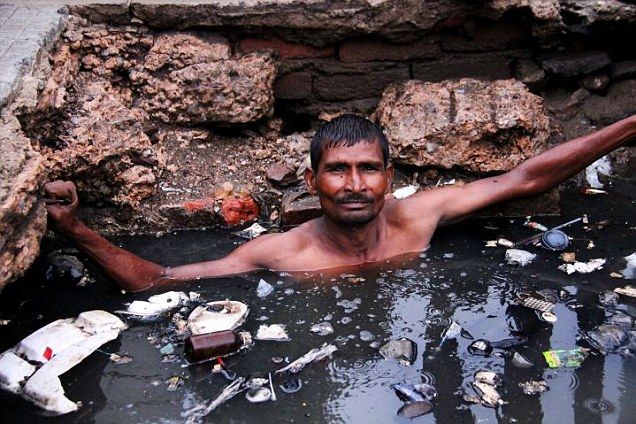 Manual scavenging is the act of cleaning sewers or removal of waste from toilets without the use of safety equipment. In simple terms, untreated human excreta is removed from pit latrines or bucket toilets using buckets or shovels by hand. There are three forms of scavenging as defined by the International Labor Organization, that is septic tanks cleaning, removal of human excreta from dry latrines and gutters and sewer cleaning.

Manual scavengers use basic tools such as a bucket lined with a sack and a handle. The worker then carries the waste manually and take it to the disposal sites. Manual scavenging is regarded as inhuman and a violation of the law. It constitutes problems that encompass domains of health and occupation, human rights and social justice, gender and caste, and human dignity. This practice is prevalent in areas that lack proper sewage systems such as Budaun district in India with more than 50,000 manual scavengers. The article discusses the causes, effects, and solutions to manual scavenging.

The major latrine used in urban areas is the dry latrines which are a major cause of manual scavenging. In India, for example, there are approximately 26 million insanitary latrines based on a report by Housing-Listing and Housing Census, 2011. Moreover, in rural areas, there are no strategies put forward to convert dry toilets.

Most countries with scavenging problem lack means of fully rehabilitating the sanitation workers. Lack of employment opportunities is a major concern and a crucial player in the inclusion program. Also, lack of schemes that would help the families whose bread winners are manual scavengers contribute to its existence. Furthermore, most organization focus more on the loan based employment.

People regard the manual scavengers as untouchable because of their work. Therefore, the society is not ready to accept and include them in community activities. No employer offers them a job and also, landlords bar them from renting their houses.

5. Denial of the existence of manual scavengers

The government and other major private institutions deny the existence of scavenging despite the deaths reported especially in India. As a result, no measures are taken to solve this problem.

The scavengers are exposed to gases such as hydrogen disulfide, carbon (IV) oxide, ammonia, and methane. Long exposure to hydrogen disulfide can lead to death by asphyxia. Also, the individual may experience epileptiform convulsions and may fall unconscious and later die. The gas is also associated with visual acuity.

Another major health concern is the musculoskeletal disorder such as the osteoarthritis. Exposure to infections in the sewer is also common due to the numerous bacteria residing in the sewers. The common infection is the Leptospirosis which is an occupational disease in people who are in contact with an animal such as the pigs and their refuse.

The workers in the sewer also come in contact discharges from rodents that are found in the sewers and may be infected with leptospirosis. Other health-related problems include dermatitis, Helicobacter pylori infection that causes gastric cancer, and respiratory problems.

For instance, most people regard them as illiterate and lazy people who do not to take up manual jobs. They further add that they opt for manual scavenging because it offers easy money. Such a statement directed to a caste will force them to continue working in the same inhuman place. This can be regarded as structural violence.

Most of the manual scavengers are women and members of the marginal class. The caste is regarded as a lower class and is excluded from moving to a better occupation. As a result, the scavenging work is seen as part of their natural occupation. Also, the marginal caste from rural areas moving to urban areas to seek a better livelihood always end up in the same occupation.

Most manual scavengers are stigmatized by the community due to the nature of their job. They are regarded as untouchable and they are forced to accept their condition. This problem is much deeper as their children are also discriminated and forced to occupy the same work as their parents.

1. Involvement of different officials and community in initiatives

In order to tackle the problem through initiatives such as Namma toilets in India, it would be necessary to involve all the major skate holders involved. They include the District officials, Relations officer, Chief Medical Officer, and District Supply Officer among any other relevant officials. The inclusion of the community around the areas that are most affected into the program is also of equal importance.

Seeking information from officials and the community will help in coming up with an informed decision on the best way to proceed with the initiative. Workshops should then be held to understand how deep the problem is and how to address it. A workshop with the community would help the organization understand the cause of the locals resulting in the practice. The locals can make a suggestion on the solutions that they feel comfortable with.

District Nodal Officers, NGOs and health officers should educate the community on devastating effect caused by dry latrines. They should also educate the mass on health issues, hygiene practices, and sanitation. Government officials should inform on the legal implications that are related to engaging in scavenging and having dry toilets.

The public should be aware of the penalties they will face once they are arrested. The awareness campaigns should not only address the dangers of scavenging but also give the community affected an alternative method of making money. On the other end, the sanitation workers should be informed about their rights and the laws that protect them from abuse by their employers.

3. Rehabilitation and reintegration of Manual Scavengers

Creation of more employment is one of the most important rehabilitation processes. The jobs created would aim to offer equal opportunities to the locals. The jobs created also act as a means to assimilate manual scavengers into the community. Other areas that are associated with social inclusion should also be established for instance the loaning schemes.

Offering them employment and lending them some money gives them the needed confidence to step in the community. Loaning schemes in India that would help manual scavengers are Special component Plan, MGNREG Act (Mahatma Gandhi National Rural Employment Guarantee Act), scholarships, pension schemes, rural housing schemes among others.

The same old model of pit latrine used by the community can be used to construct small pit toilets in a cost-effective manner. In order to ensure that the villagers fully participate in the activity, they can be provided with building materials and shown how to construct the latrines. The demonstration can be done in different areas within a given region. They can thereafter use the materials given to build the toilets themselves.

Training the manual scavengers and their family how to construct a pit latrine would serve two purposes. First, the number of people with knowledge on construction of a latrine would increase and therefore, more latrines would be constructed in the area. Secondly, the scavengers who gain required knowledge in the construction of pit latrines and can then seek for a job related to the same. The training can be organized by the various organization with the help of experienced masons.

The funds that are released by the Total Sanitation Campaign should be put in good use. In the past, the funds were allocated on time but were not utilized. Such funds should be reallocated. The officials managing the fund should then strategize on how the funds will be given to the community.

The government should enforce the law that prohibits scavenging. The law in a country such as India was enacted in 1993 and changes have been made in 2013. However. Governmental institutions are reluctant to act and go to great lengths in denying the existence of manual scavengers. People subjecting others into such inhuman activities should be arrested.

Every person in countries that scavenging still exists should realize they are equally guilty and responsible. Therefore, every individual in the society has a moral obligation in curbing this problem. For instance, garbage should be thrown in proper bags and not thrown in sewers or septic tanks because they cause the blockage. People with blocked toilets can seek services from the right sanitation institution and desist from using manual scavengers for cheap labor.

Children whose families are involved in scavenging experience a lot of social stigmatization that may affect their education. In addition, the scavenging work generates little money that is not enough to educate a child. The child ends up dropping out and joining their parents in the same line of work. Implementation of schemes that would help these children finish their studies would be an effective strategy in discarding the theories and myth associated with manual scavenging.