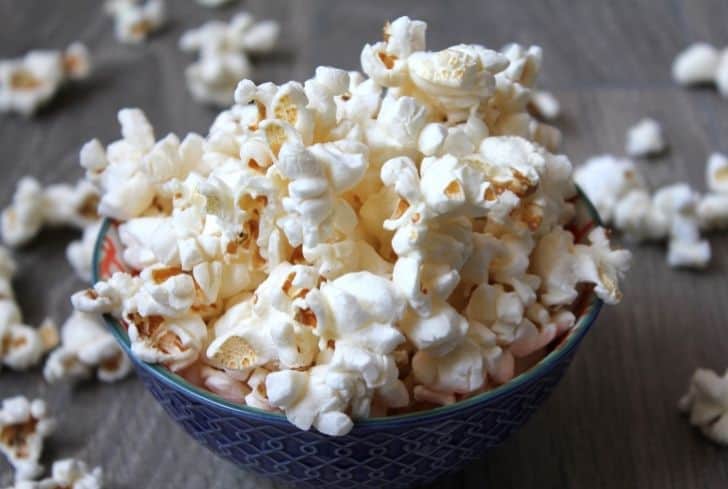 Honestly, what is a movie without popcorn? Popcorn is probably the most popular snack food at sporting events and in movie theatres. It is also a breakfast cereal, consumed by Americans since the 1800s, serves as a traditional Halloween treat, and has also been used as a wall or Christmas tree decoration in some parts of North America as well as on the Balkan peninsula.

Can You Put Popcorn in Compost?

Yes, you can put popcorn in compost. In itself, popcorn is a variety of corn kernel which expands and puffs up when heated. The popcorn kernel’s strong hull contains the seed’s hard, starchy shell endosperm with moisture, which turns to steam as the kernel is heated.

Pressure from the steam continues to build until the hull ruptures, allowing the kernel to forcefully expand, from 20 to 50 times its original size, and then cool. Some strains of corn are cultivated specifically as popping corn. It, therefore, means the grain itself, like any other foods, can be added to the compost pile.

When you pop your corn into popcorn, not all the corn pops. There can be a bit of waste leftover when you pop a bag of popcorn where some kernels may not pop at all while others getting just get a little bit too burnt to be tasty.

Rather than sending them into landfills as they are not edible and neither are they going to help in any other way, you can use them in the compost heap. Both the unpopped and popped popcorn can be added onto the compost heap, even if they are covered in salt or butter.

However, you should know that the added sugar or butter in the popcorn being composted, will attract ants and other pests into the heap. Also, try and bury your popcorn, whether popped or not, while in the heap.

This is because they can be a treat for the birds, chipmunks and squirrels, and they could feed on them and eventually not help your or your composting business. Brown Thumb Mama calls the kernels that do not pop ‘old maids’.

Can You Compost Popcorn Bags?

See also  Can You Compost Eggshells? (And Cooked Eggshells?)

As such, these popcorn bags must be tossed in the black cart for trash or garbage. It should also be understood that not all microwave bags are made the same. Those made of only paper can be placed in the green bin, meaning they are both recyclable and compostable.

However, those made or those that contain plastic, are not compostable and neither are they recyclable, because of the plastic element. They should be placed in the trash and not composted

Absolutely not. Popcorn bags are not biodegradable.

As already mentioned, popcorn bags are not compostable, and this could also mean that they are not biodegradable. One of the sources argues that they are lined with chemicals that prevent grease from soaking through. Another source argues that popcorn bags are coated with a material that does not break down during the composting process, and could affect the decomposition process as well.

Another site argues that the popcorn (plastic) bags contain perfluorinated carbons (PFCs), therefore they are not known to degrade by any natural processes. These sources and their arguments make popcorn bags not suitable for recycling and composting. It also means that degrading will be a problem, mainly because of the said chemicals.

The bags are also grease resistant to keep butter topping from leaking through the bag. Retail Source also sells eco-friendly popcorn bags that are CedarGrove certified. They are made of are two-ply chlorine-free paper, are grease-resistant and are FDA approved.

Although neither company says if their bags are recyclable, compostable or biodegradable, any eco-friendly product ought to tick yes on the three points. With the advancement of these popcorn bags, things will slowly change and soon, the answer to ‘if popcorn bags are biodegradable’, will change to a resounding yes!

Can You Compost Popcorn Kernels?

Definitely, you can compost the popcorn kernels. They can either be fresh from the store or the unpopped kernels from a previously popped batch. As already mentioned above, even if they are covered in salt or butter, the ‘old maids’ can be composted with ease.

However, the added sugar or butter in the unpopped kernels being composted will attract ants and other pests into the heap. In addition, try and bury your kernels since they can be a treat for the larger birds, chipmunks and squirrels, and they could feed on them and eventually not help your or your composting business. If the smaller birds feed on the kernels, they could have difficulty swallowing them

Are Popcorn Kernels Bad for You?

Popcorn kernels are generally safe for human health. However, they can be risky or dangerous in the following scenarios:

1. To a child: Popcorn kernels are risky to young children as they are a choking hazard. In fact, the American Academy of Pediatrics includes popcorn on its choking-risk list for children under age 4.

Older children and adolescents should not ingest large handfuls of the unpopped ‘old maid’ kernels either, because a[art from them being a choking hazard, crunching them can damage teeth. In severe cases, swallowing them can cause a mass collection in the intestinal tract, known as a ‘bezoar’.

Small bezoars may pass on their own or with the help of medication, while sizeable ones may require surgery. The bottom line is that you should not entice a young child with popcorn. And if you’re munching away, only eat those kernels that are fully popped, lest the kids copy from you and lead to a health risk.

2. If they are not friendly to you: The popcorn kernel itself is a good source of dietary fiber, antioxidants and is also low in fat and free of sugar. However, the popping process often involves the introduction or addition of fats, sugar, salt and other additives.

The serious problem that arises from these additives whose impact on your health is through the composition of your whole diet and lifestyle. If your body reacts negatively with these additives, the popcorn and its kernels will be bad for you.

3. If you are allergic: Although the consumption of popcorn is a fairly safe process, some people might be allergic to the popcorn or the kernels. If you are allergic, then popcorn kernels will result in serious allergic reactions, and will not be good for your health, especially if you have other serious pre-existing conditions.

a) Cancers and infertility risks: When doing microwave popcorns, the majority of the people place them in microwave popcorn bags. Unfortunately, they are lined or laced with perfluorooctanoic acid (PFOA).

PFOA is the chemical used to put the slick in non-stick cookware, but, when heated, PFOAs increase the risks of cancers and infertility. The three studies quoted by Familywize have shown that PFOAs lowered a participant’s disease-fighting antibodies by 40%, factory workers exposed to PFOAs had increased cancer risks, especially liver cancer and prostate cancer, and exposure to PFOAs delays in achieving pregnancy. PFOAs and popcorn kernels are separate things, but popping the kernels in a microwave relies on bags that contain the chemicals, which is dangerous for human health

See also  Can You Compost Grass Clippings? (And 7 Creative Ways To Use Them)

b) Lung diseases: Microwave popcorn also relies on a flavoring agent, which in researches done in 2002 and 2007, showed that the flavoring agent increased the risk of bronchiolitis obliterans. The lung condition is caused by a response to diacetyl which generates scarring of small airways and makes breathing difficult. To avoid these issues that might be bad for human health, go for air-popped popcorn and avoid microwave-popped popcorn

Are Popcorn Kernels Safe for Birds?

Popcorn kernels are relatively safe for birds. However, there are several conditions. Most birds are not picky eaters and can eat anything, from fruit, seeds, peanut butter, nuts to even popcorn. Birds like unpopped popcorn kernels equally as well as popcorn that has already been popped.

Birds such as pigeons, jays and woodpeckers will probably consume the hard kernels with relative ease. However, the smaller birds may find them too large and hard. This could make their consumption difficult and make life tough for the bird. This is where the conditions and considerations come in: