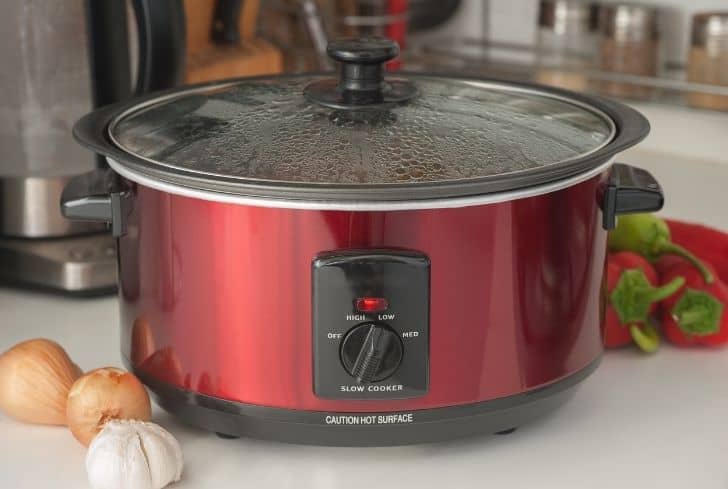 In the kitchen, there are a variety of appliances that can be used to cook food and achieve its ultimate taste. However, each uses its own way of cooking. For instance, the conventional oven uses an electric element or gas burner to cook, with heat radiating up and pushing cold air down. On the other hand, the gas stove burner will combust gas and warm the pot from below.

Slow cookers, as the name suggests, simmer food at lower temperatures than other cooking methods like frying, baking, or boiling. With that, you might think the cooking method consumes a lot of energy or is not favorable to the environment. This article answers such questions.

Do Slow Cookers Use A Lot Of Electricity?

Slow cookers use little electricity, making them energy efficient. Slow cookers, like those from Crock-Pot, use between 75 and 150 watts of electricity on low and between 150 and 210 watts on high. The appliance can cook all day, but it will use the same amount of energy as a standard light bulb.

Depending on the size of the slow cooker, its wattage runs anywhere between 50 and 300 watts. That is not a lot of power, and even when you consider that you leave one cooking 3 quarts of food for 8 hours a day, a 200-watt slow cooker will use only 1.6 kWh.

Are Slow Cookers Cheaper To Run Than Ovens?

In a word, yes! Slow cookers are cheaper to run than ovens. They use less electricity than conventional light bulbs, let alone an oven and many other kitchen appliances.

The Centre for Sustainable Energy estimates the average electricity usage of an electric oven at between 2 and 2.2 kWh, while a microwave uses between 0.6 and 1.5 kWh. The electric oven is the most expensive appliance to use in the home, as using it for an hour each day will cost £2.46, which is $4.55 a week, or £127.92 ($236.59) over a year. As such, with regards to your electric bill, the slow cooker will be cheaper to run than the oven.

They require installation, which could cost some more money, with most homeowners spending about $2000 on average for the unit and installation. The slow cooker requires no such installation charges, and even if it did, it would not get as high as the ovens.

The oven most likely uses more energy when pre-heating, while the slow cooker uses the same amount of energy and heat to cook an entire meal. Ovens range from 1000 to 5000 watts, with the average being 2400 watts, whereas slow cookers use between 75 and 210 watts of power, depending on the setting.

How Much Does A Slow Cooker Cost To Run?

According to Hunting Waterfalls, for an 8-hour cooking time using a slow cooker, you will roughly use 1.2-1.7kWh of electricity. With the average cost of electricity being around $0.13/kWh, the slow cooker will cost you roughly 16-22 cents for the eight hours of cooking.

Also, at roughly 150-210 watts the slow cooker only costs around 2-3 cents per hour to run. A meal cooked over 8 hours will therefore cost between 12-53 cents, depending on your slow cooker and electricity costs. This is a very low cost, making the slow cooker an energy-efficient appliance in addition to being cheap to run.

Is A Slow Cooker A Good Investment?

Absolutely! A slow cooker is a good investment, as it poses a wide range of advantages

The skills required to operate a slow cooker are very minimal. The settings and features are easy to read and control for different temperatures, times, and programs.

2. It is convenient and time-saving

With a slow cooker, you only need to put ingredients in the pot, turn it on and return to a cooked meal. Instead of cooking while tired at work, you can set the slow cooker in the morning before you leave for work, and it will return to a ready dish by the time you get back home.

As we have learned above, slow cookers are energy-efficient. They use less electricity, meaning they will save you some money when it comes to your electricity bill. Modern slow cookers can also function as multicookers, combining several appliance functions into one, therefore saving you money by buying multiple single appliances.

4. They are energy efficient

Slow cookers use little amounts of electricity without wasting energy. If you are conscious about saving energy, consider getting a slow cooker. Additionally, if it is multifunctional, it will save you power because you will only use the appliance rather than multiple appliances.

5. They are easy to clean

Slow cookers are easy to clean. The inner pot is removable and is often non-stick, making cleaning easier. Moreover, you can buy plastic, disposable liners for the appliances, making cleaning them easy as you will only remove the liner and toss them in the garbage. A quick rinse or wipe of the pot and lid is all that you will need.

6. It can cook almost everything

The appliance is well-designed to retain moisture while cooking, and as such, all you will need is a few additional moisture sources, like coating the pot with oil, to avoid foods sticking. As such, you need less oil or fat to cook. Cutting down on the fat content in your meals can prevent cholesterol and promote a healthier body.

The flavor of the food cooked in a slow cooker is retained because there is no evaporation during the cooking process. All the flavors developed during the hours of cooking are trapped, resulting in delicious meals with a tasteful flavor.

In line with trapping all the flavors, the cooking odor is also contained in the pot. While some foods release some pungent odors while cooking, all the smell is trapped in the pot and will only come out when the appliance is opened.

Slow cookers cook at high temperatures that are enough to kill pathogens in some foods, such as meat. The presence of the keep warm function enables the food to maintain temperatures and prevent bacteria formation, which thrives in cold food.

What’s more, is that the materials used to make these appliances are BPA-free and are approved by the FDA as safe for cooking. Your health is therefore guaranteed with there being no risks from PFOA materials.

What Appliances Use The Most Electricity In The House?

The average-sized microwave oven uses about 215 kWh of electricity per year. The average microwave’s wattage ranges from 600 to 1500 watts. Fortunately, these appliances are used for a limited amount of time, making the overall yearly energy use lower than what their pull suggests. An average 1200-watt microwave, if used for 30 minutes, will draw around 215 kWh.

A refrigerator/freezer combo consumes up to 1800 kWh per year. In contrast to the microwave oven, the average refrigerator wattage runs anywhere from 150 to 400 watts, which is a relatively small amount. However, since refrigerators are used throughout the day and the year, their annual consumption can vary between 720 and 1,800 kWh. Bear in mind that older, less-efficient models consume the most electricity.

Your average dishwasher runs up to 855 kWh annually. It will also draw about 1,200 watts of electricity. However, calculating the yearly consumption varies greatly depending on whether you use an energy saver cycle or the ultra-hot, longer-running scouring cycle.

See also  How Many Amps Does an RV AC Use? (Explained)

Whether your household water is heated by gas or electricity is also a factor. For comparison purposes, the yearly energy consumption, using the standard of 1.5 hours of usage per week, ranges between 300 kWh and 855 kWh.

The typical coffee maker uses between 13 kWh and 42 kWh per year. It draws energy at between 500 and 1,000 watts. However, coffee machine brewing habits vary greatly from household to household.

As such, the rough calculations for annual energy consumption depend on how much of a coffee addict you are, although typically, it ranges between 13 kWh and 42 kWh.

The domestic espresso machine can consume a whopping 1.25 kW per cup. The wattage of most espresso machines is between 1,000 and 1,500 watts. Based on just one cup per day, an espresso maker averages a robust 450 kWh annually, making it one kitchen appliance that you may want to reserve for special occasions.

Ovens usually range from 1000 to 5000 watts, with the average being 2400 watts. Ovens require preheating for half an hour, using approximately 1.2 kWh, added to another 2-3 hours of cooking time, which can use another 6-8.5 kWh to cook a meal in the oven.

What Temperature Does A Slow Cooker Cook At?

On the warm setting, the cooked food that you want to warm should be at a minimum temperature of 140 degrees Fahrenheit. Slow cookers warm gradually and cook at a relatively slow pace, meaning their temperatures vary depending on how long you are cooking.

How Hot Does A Slow Cooker Get?

Even though slow cookers can reach temperatures of 300 degrees Fahrenheit, once the food that you are cooking contains a lot of water or liquid, the temperature of the food will stop rising at the boiling point.

That is why time is the metric used by most slow cookers instead of temperature. The food in the cooker’s crock pot will reach a maximum temperature or just below the boiling point, whether you use the Low or High setting.

The main difference between the settings is how long the food will take to reach its maximum temperature. Crock-Pot stated that it takes 7-8 hours on the low setting and 3-4 hours on the high setting for the food to reach its boiling point.