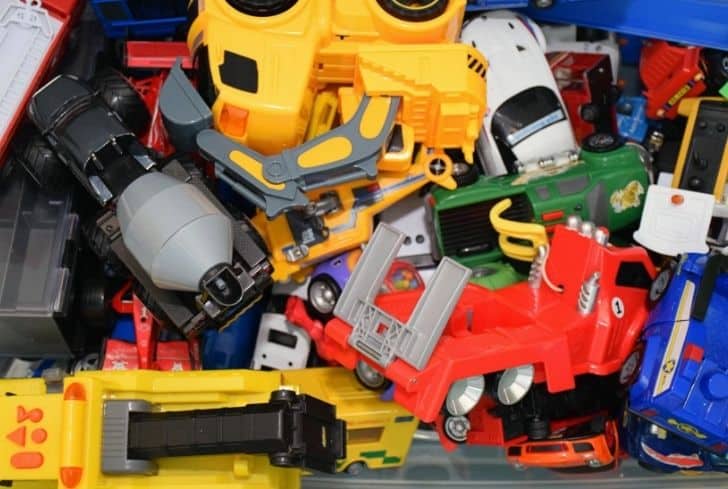 We take so much care of our kids but then give them plastic toys made of PVC plastic to play with, which is the deadliest plastic nowadays. Young children are usually at higher risk since they often insert plastic objects into their mouths, chew or suck on, so the toxins from plastic are easily consumed but not quickly removed.

1. It’s estimated that 150 million tons of plastic is already in the ocean, and this is set to increase at around the rate of 8 million tons a year. It is a well-known fact that there may well be as much plastic in the oceans as fish by weight by 2050. And plastic toys are more likely to contribute to this problem.

2. We can estimate that 1402 tonnes of the children’s plastic toys sold last year in the U.K. will end up littered within 50km of the coastline in the U.K. at the end of their life in 2, 5 or 10 years. If half of that was to end up in the sea, that would be 701 tonnes or to use the London bus analogy, that’s the same weight as 58 London buses.

3. The primary issue with the high number of toys produced is the fact that due to the nature of the materials and their construction, the vast majority of these toys cannot be recycled. Besides, battery-operated plastic toys are a double edge sword of polluting toxins because batteries cannot be recycled.

Yes. Just about every soft plastic toy is made with PVC, and the combination of a few toxic chemicals, mostly found in PVC plastics, makes plastic toys dangerous for kids and babies having negative impacts on their health.

The harmful substances found in plastic toys are:

1. Bisphenol A (BPA)– Bisphenol A is a hormone disrupter that is used to make polycarbonate plastic (hard clear plastic). Primarily, human exposure occurs by way of ingestion – diet and mouthing/sucking plastics – and skin contact.

2. Phthalates (pronounced THAL-ates)– Phthalates are a class of chemicals used as plasticizers such as PVC (Polyvinyl Chloride) that are used to soften plastics to make toys flexible rather than rigid, bind fragrances in products, and also act as solvents and fixatives to make the finished play. The two most commonly used phthalates in plastic toy production are DEHP (diethylhexyl phthalate) and DNIP (Di-isononyl phthalate). Phthalates are used in many products, including cosmetics, but have been banned in any toy or part of a toy that can enter a child’s mouth cavity.

6. Lead (Pb) – It is used to make plastic toys more durable. Lead affects the nervous system and has been linked to hearing loss, ADHD, and decreased I.Q. It’s also a concern because children absorb and retain the lead in their systems more quickly than adults.

7. Cadmium (Cd) – It is a plastic stabilizer. A known carcinogen, cadmium, also affects average brain growth and can cause kidney damage.

Bisphenol A (BPA) possibly leaches from polycarbonate plastic and disrupt hormone. However, not all plastics contain BPA. More and more plastics are being made with compounds that are BPA free, showing in label “BPA-free” or something similar.

Since body systems and organs of children are still developing, they are particularly vulnerable to these toxic chemicals. Their bodies are small, so a low dose has significant effects on a child.

See also  3 Ways To Power Your Home With Clean Energy

Incidents of the use of toxic chemicals in toys

1. In June 2007, more than 1.5 million units of a popular line of brightly painted wooden trains manufactured by RC2 Corporation, recalled after learning that they violated the U.S. government standard for lead (Pb) in the paint. The parents were warned to stop using the toys immediately by the U.S. Consumer Product Safety Commission (CPSC).

2. In 2007, more than 17 million toys were recalled after violating the federal Pb paint standard.

3. In January 2010, 55,000 units of children’s costume jewelry that contained high levels of cadmium (Cd) recalled by the CPSC.

4. In June 2010, 12 million promotional drinking glasses with the painted coating held Cd sold at McDonald’s were recalled. Consumers were advised to stop the use of the product immediately.

2007 recalls the problem of toxic chemicals in toys and other children’s products and 2010 recalls reminded that this problem is yet to be solved.

Why is Plastic Often Used for Children’s Toys?

Plastic toys are far more durable than wooden toys and can be bent, twisted and quite often stamped on before any severe damage happens to them. Of course, it’s for a child’s play. Thus at least plastic toys can stand up to a bit of rough play.

Another benefit of plastic toys over some materials, such as wood, is that plastic toys are washable toys. If the toys get dirty with mud or other delights, you can wipe their toys clean. It requires only a damp cloth, and the toys are as good as new. Plastic toys are not only long-lasting, but also minimize the risk of transferring dirt and germs from washable toys onto your children’s hands, or around the house!

Children love plastic toys for their ability to bounce back, and withstand plenty of abuse and provide hours of fun to children.

On the other hand, wooden toys are gorgeous and gaining in popularity. Still, being a natural substance, wood is always prone to rotting if not appropriately maintained, and can cause split and splinter, leaving children at risk from injury.

How Can Giving up Toys Help Stop Pollution?

“We don’t know exactly how much of the plastic that ends up in landfills comes from toys” – green campaigners say and that consumers can help reduce the amount in circulation.

‘Friends of the Earth’ says about the ways to cut back on buying plastic toys like passing toys, toy libraries, buying less, borrowing off friends and sharing more. More we adopt these processes, they will end up less in landfills and finally in the ocean.

How Long Do Plastic Toys Last?

“Toys are far from single-use plastics, as we know from research that they stay within a household for approximately 10 years and tend to then be passed on to charities, friends and families,” Natasha Crookes from the British Toy and Hobby Association says. The organization even claims many toys will last between 15-20 years before they enter the waste stream.

What Percentage of Toys is Plastic?

Plastics, an industry publication, estimated that 90% of toys on the market are plastic. After World War II, the material’s popularity in toy-making skyrocketed since materials like wood, metal, and rubber were rationed for wartime efforts.

In New York, as per the National Museum of Play’s blog, retail stores discontinued certain toys during the war to comply with material limitations that pushed toymakers to find new craft materials.

In the 1950s, Fisher-Price started developing plastic toys like the classic Buzzy Bee. Hasbro launched a line of military-themed dolls in the next decade, making its G.I. Joe doll one of its first commercially successful products. However, the quality of vintage toys and standards of manufacturing changed over time, as companies moved production overseas mainly to China to offset labor costs.