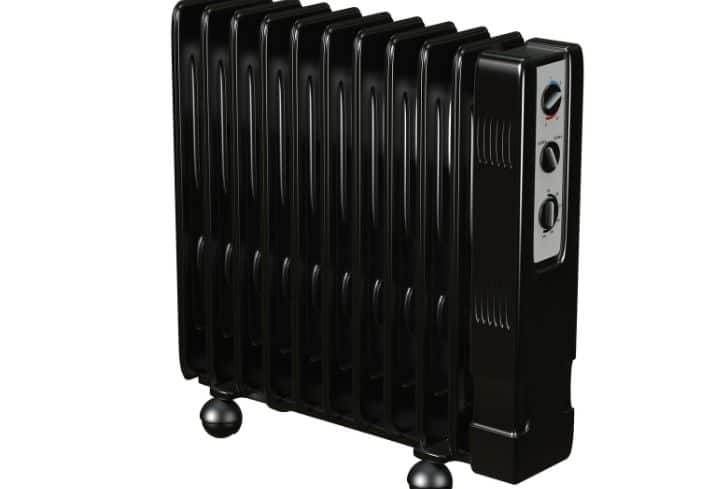 Every year, after spring, comes winter. Sometimes, the temperatures dip so low in certain areas that the only way to stay warm is to heat the house nonstop. As a result, manufacturers have come up with appliances that can effectively do the same, while at the same time not adversely affecting the environment.

In comes oil heaters, which are convectional heaters used in domestic heating. They are filled with oil but are electrically heated. They also do not involve burning any oil, but the oil is used as a heat reservoir or a buffer, not as fuel. This article will describe oil-filled heaters vis-à-vis their environmental, social and economic effects.

Do Oil Heaters Use A Lot Of Electricity?

Not so much, although it depends on your understanding of ‘too much electricity’, and how you use the oil heater. You can also influence the electricity usage of an oil heater by simply tweaking the temperature settings, as well as using it in the right spots.

Generally, oil heaters use about 1500 watts of power, which could be a lot, or less, depending on how much heat you need for your home. Some mono oil heaters use about 700W of power. They do the job as the normal-size oil heaters but are designed to heat rather small rooms, or just to keep your feet under your desk warm. Running the 1500W oil heater is equivalent to powering 3 desktop gaming computers, or two vacuum cleaners at the same time.

Are Oil Heaters Expensive To Run?

The maximum power rating of the heating element on an oil heater is the same as it is for conventional electric space heaters, at 1500 watts. The majority of the models have a low energy setting of 700 or 800 watts, and some could have another setting between the two.

When the element is on, the heater will be consuming power at the selected rate. If you pay at the national average electricity rate of $0.12 per kilowatt-hour, you will be paying $0.18 for every hour the element is running at maximum power and about $0.10 per hour at the lowest setting.

It costs the same as running a ceramic resistive heater with the same two power settings. Depending on your electricity rate and your power settings, your oil-filled heater can cost anywhere from $0.04 to $0.3 per hour.

The difference between oil heaters and other space heaters, which makes them a bit better, is that oil heaters save energy as the power they consume is used in heating the oil, not the air. The thermostat can monitor the oil temperature more efficiently than the thermostat in an exposed-element heater can monitor that of the surrounding air.

In doing this, it guarantees the element will come on only when it is needed. The heat from the oil-filled coils still has to radiate into the air, and that eventually cools the oil. Although the heat radiates slowly, it helps to keep the element off for a longer time. The beauty of this is that every minute the element is off is one when you don’t have to pay for electricity.

Are Oil Heaters Safe To Leave On Overnight?

First, they are designed to be very safe, and in contrast to other heaters, oil heaters do not expose any heating element. Their big metal surface does not get too hot to touch.

Secondly, oil heaters, have additional security features like built-in timers and tip-over protection, among others, which ensure the appliance is safe, even when left unattended overnight.

Thirdly, the oil heaters have no moving parts, meaning there is no noise from the appliance that can interrupt your sleep. As such, they are less likely to cause you any trouble as you sleep, meaning you can leave them overnight.

Fourthly, the internal pressure of the oil stays constant since oil has a high boiling point. Therefore, the oil heaters can handle quite high temperatures for an extended period like overnight.

Next, the hot body does not get glowing red like infrared heaters, meaning it is safe to anything close to it. They are not temperamental, and any modern heater worth its salt has safety shut-off switches in-case it falls over or gets too hot.

Also, the thermostat monitors the temperature of the oil, not that of the room. This means the device will relay the signal to switch off the power when the oil reaches the targeted temperature and will switch back on when the temperature falls below the cut-in temperature.

However, caution should be taken at all times, because not always will oil heaters be safe to leave unattended overnight. Some have been known to explode when their thermal fuses fail to shut them off. The result is fire, thick black smoke, unpleasant odors, oil on walls and other surfaces, and disfiguring scalding.

Some companies offer their oil heaters with a fan, to increase the airflow over the heater. Therefore, although they are technically safe to leave overnight, ensure they are working as they should. Also, and this should go without saying, take all measures to ensure the oil heaters do not fail or cause fires. Also, if you can, use other ways to keep warm at night, rather than taking the risk with heaters that could cause fires and eventual death.

Of course, oil heaters can catch fire. This happens if the thermal fuses fail to shut off the appliance as they should, causing it to overheat and explode. The result is fire, property damage and if not controlled early, death.

In 2017, the Sunday Times reported a leak that happened on a Mellerware Nevada 11-fin oil heater. In the same year, Bunnings Australia was also forced to recall their Moretti 11 Fin Oil Column Heater after Product Safety Australia deemed the units unsafe with reports of some ‘exploding’ and spraying hot oil.

On Christmas Day, a home in San Francisco, California was filled with smoke, fire, and wrongful death because of a defective oil space heater. The space heater from De’Longhi Products became the focus of a wrongful death lawsuit after the fatal house fire near Golden Gate Park.

The company, by 2017, was facing other 85 lawsuits within the United States, where some cases involved deaths. Faulty and defective switches result in fires. That is why there were so many lawsuits against De’Longhi. This prompted the company to evaluate their products, where they found over 3.5 million oil-filled radiator-type electric heaters, manufactured between 1980 and 1988, which were faulty and had a defective switch.

How Long Do Oil Heaters Last?

Despite the appliance remaining on for quite some time, oil heaters can last up to 20 years. The life expectancy of an oil-filled heater is directly proportional to the internal temperature of the heating element.

According to Know The Flo, if the coil temperature remains between 750-1000 F throughout its operation, then the heater can last anywhere from 16-20 years. If the appliance is set to higher temperatures of operation, meaning the coil will deteriorate at a faster pace, the oil heater can last between 10-15 years, otherwise, it can theoretically last longer.

An oil heater’s lifespan is also determined by external factors such as mechanical damage, corrosion and the on-off cycling of the heater. If the heater is constantly exposed to mishandling or if it is turned on and off repeatedly without being given respite to cool down, it will deteriorate faster.

Which Is Better: An Oil Heater Or An Electric Heater?

Oil heaters are more energy-efficient than electric heaters. They retain heat very well and once they hit the desired temperatures, they switch off automatically. This, in turn, can save you a ton of energy, using low power to maintain the warmth.

The electric heater, on the other hand, relies on spreading heat through the air, meaning they lose heat quickly, and are not energy efficient. Any bad installation or drafty windows could also mean losing the heat even faster.

See also  What is a Rainforest? Features, Importance and Location of Rainforests

A standard electric fan heater is cheaper than oil heaters. This could primarily be because they are produced in mass numbers, meaning there is tons of competition, meaning cheaper prices.

The oil heaters cost a bit more than standard electric heaters, although they save you money in the long run.

Oil heaters, thanks to their high heat retention, will stay hot for hours after being switched off. They are great for saving energy and money, especially if you are to leave them up at night.

4. Silence while at work

The electric heaters are noisy, especially if they have fans. The noise might not be much but is enough to disrupt your peaceful night’s sleep.

The oil heaters, on the other hand, are silent since all the heat comes from heating the oil, meaning there are basically no sounds with these heaters. They are therefore the best for bedrooms as they will not wake you up, or put you at any immediate risk.

Both appliances can be considered safe for kids, although electric heaters might be safer. The majority are not overly hot to the touch and the noise makes it obvious that it is on, and of course hot. The oil heaters are however advantageous as they are safer for fires.

Fan heaters for the former, if blocked, can lead to a fire hazard, but with oil heaters, they do not have risks if there are curtains or clothes ‘accidentally’ blocking them, making them overall safer for fires. They can only result in fires if their switches have malfunctioned or are defective, causing the appliance to overheat, resulting in fires.

6. Quickness in their operations

Electric fan heaters are faster in heating a room as they can do it in minutes. Their fans quickly spread the heat throughout the air of the space.

Oil heaters, are slow to heat and can take up to 30 minutes to get a room fully warm. However, the advantage is that the heat can last a lot longer than that from electric heaters.

Electric fan heaters result in air movement that could bring up dust and allergies into the air. As such, they are not ideal for people with such health conditions.

Oil heaters are safe for such individuals in general.

There are thousands of electric fan heater models to choose from. You are, therefore, more likely to find a model that fits your personal choice and taste.

For oil heaters, the choices are limited, and you will have to compromise with the available appliances.