What is Sanitary Landfill?

The main purpose of sanitary landfill is to ensure waste is safe by reducing the harm from accumulated waste and allowing safe decomposition. The alternative layering of garbage and soil aids in hastening decomposition. Because methane, a toxic gas, is produced from decomposition, it is collected in the landfill to generate electricity instead of being released into the atmosphere. The sanitary landfill also uses a clay liner to isolate the trash from the environment.

Besides, it involves well-designed engineering methods to protect the environment from contamination by solid or liquid wastes. When the land used as the sanitary landfill is full, impervious clay is used to seal it and if deemed safe, that area can be used for other purposes. Here is a description of how sanitary landfill works and what makes it different from open damping.

Sanitary landfills operate by layering waste in a large hole. There are different levels of layering of waste to facilitate decomposition of the materials as well as trap toxic gases released from the process. The layers are made in such a way that the bottom part has the smallest volume with the top part taking the bigger volume to avoid collapsing of the land.

The first layer is the liner system. This is the lowest layer and the first one used in laying a foundation for the sanitary landfill. The process entails the application of compact and well dense clay to prevent the seeping in or out of liquids. It is for this reason that this clay is completely impervious.

This modernized type of sanitary landfill is also fitted with high density plastic which is applied on top of the clay for reinforcement. This engineering design is to make certain there is no room for the penetration of liquids thus preventing contamination of the underground water.

The second layer is the drainage system. The drainage system takes care of the liquid produced from the decomposition of some waste materials. Due to the toxicity of this liquid, it should not seep past the liner layer. The drainage layer aids in draining away this liquid to avoid it getting close to the liner system. Moreover, rainfall and snow may also seep from the top surface to the landfill and also needs to be drained away.

These liquids may contain contaminants from the waste materials that can corrode the liner system and contaminate the soil and water below the landfill. In reducing this risk, the sanitary landfill is fitted with perforated pipes on top of the liner layer to collect all the liquids that find their way to the bottom of the landfill through leaching thus the name leachate. The plumbing system then directs the leachate to treatment plants to undergo treatment for reuse.

The third layer is the gas collection system. In the same way that liquids are produced, gases are also released through natural processes. Methane is the most common of these gases. Methane is a gaseous hydrocarbon which is very volatile as well as toxic and thus, when released into the atmosphere, it contributes to global warming and can harm the overall environmental health.

There are, therefore, extraction pipes in this layer that trap methane gas and transport it to treatment plants to treat the gas and thereafter, use it to produce electricity and to power various processes.

The fourth layer contains the trash itself. This is the largest layer and is also the topmost. Periodically, trash from various sources is brought in by the various garbage collection companies and dumped in this layer. To avoid taking too much space, the garbage disposed is compacted on a daily basis.

Once this has been done, a layer of compacted soil is applied on the surface of the sanitary landfill. Soil does a good job of containing bad smells and the growth of harmful microorganisms such as pests and flies. Also, the compact soil keeps away windblown debris.

Landfills have been known to be as deep as hundreds of feet and can take years before they are fully filled after compaction. In case a sanitary landfill gets filled, landfill capping is done. This is the process of capping or topping the landfill with synthetic plastic or clay, just as the bottom of the landfill. The aim of this is to prevent methane gas from escaping to the atmosphere as well as bad odors.

Further, this layer is reinforced with a layer of top soil, about 2-3 feet and vegetation is planted. When all this is completed, the land is reclaimed and can be used for other purposes. In spite of all these processes, due to the toxicity of the waste buried deep down, there is still a chance of contamination, either of the water ways or the soil which affects plants, some of which are edible to both man and animals.

READ  What is Carbon Footprint and Various Ways to Reduce it

To avoid this, sanitary landfills that have been closed and repurposed for gardening or any other form of crop planting where they are monitored for decades and the soil regularly tested for irregularities. If the plants are dying then there might still be methane gas being released from the land. Once it is proved that the land is safe, the area is open for other various uses through limited.

Heavy duty projects such as construction of housing units is not at all allowed since the ground will have to be scrapped for the establishment of a suitable foundation. Simple land intensive projects such as open spaces, nature parks and golf courses are encouraged on such lands.

1. Sanitary landfills are only set up by the authority of the local government or the state. It is not a personal or individualized decision, but a societal one. The religious leaders, the non-governmental organisations and the public must all be consulted before it is set up.

Nevertheless, it is different for open dumping. This waste disposal method is not processed officially by the relevant authority. Instead, people set up their own open dumping sites outside their houses or a common dumping site that is left open for the small organisms such as rats and flies to make habitat. These open dumping sites can be found anywhere in people’s compounds, market places, and even public places like schools and churches.

2. Soil is a major component of sanitary landfill given that it is applied daily or on a regular basis to keep bad odors and pests off the land surface. This ensures that the land near the landfill can be used by others without pollution of the air or infestation by pests.

For open dumping sites, however, there is no soil applied. Open dumps are just holes dug to accumulate waste and no amount of operational activity such as application of compact soil is done. Hence, they pose a greater danger to the environment in terms of bad odors containing harmful contaminants such as methane.

3. Monitoring is a key part for any sanitary landfill. Monitoring is so important to an extent that engineers are contracted to oversee the establishment of the site. With the application of the compressed clay in the bottom layer, engineers are able to monitor whether there is any water seeping from the ground up to the landfill or the landfill down to the ground since this would cause a health hazard to the underground water.

In the second layer, the engineers monitor the drainage of all liquids accumulated in the landfill. Proper drainage is essential to ascertain there is no water seeping to the bottom layer and subsequently to the underground water. Methane gas in its raw form is toxic to the environment since upon release to the atmosphere, it contributes to global warming and contamination of the nearby environment. Therefore, it is kept in check by fitting the landfill with a gas collection system.

For open dumps, there is no monitoring at all. Once a pit has been dug, there is absolutely no monitoring of what is disposed of and in what manner. It is for this reason that large open pits have led to contamination of the land and water supply. Moreover, open dumps do not have treatment plants for the treatment of liquids or gases from the dump site.

4. Open dumps are small in size and are mostly used as domestic waste disposals. Open dumps are relatively shallow going to a few feet deep. Due to this, they are more in number compared to sanitary landfills. Approximately every household has an open dump in most countries.

On the other hand, sanitary landfills are big. One of the biggest ones is in California and is about 500 feet deep. It is home to over 40% of the state’s waste management system. Landfills take a long time to dig up as opposed to open dumps and involve a lot more than human labor. For example, heavy machinery is needed to get to the deep depths. So, the landfills serve communities and states rather than a few individuals. 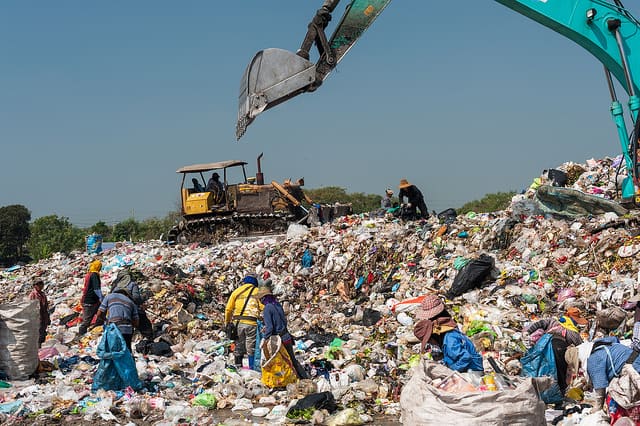