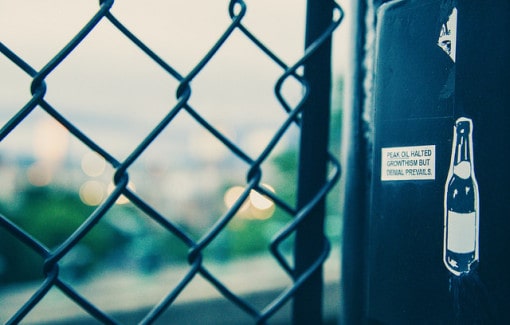 Peak oil is defined as the exact point in time that the global product of crude oil hits its maximum rate. After this point, the production of oil will then start to gradually decline. The theory of “Peak Oil” was developed by M. King Hubbert, who claimed that the oil production follows a bell-curve with the peak of production occurring when approximately half of the oil has been extracted. The theory came about because crude oil is a non-renewable energy resource that we cannot mine and use indefinitely: one day, the reserves that are hidden deep under the Earth’s surface will run out and we will have to find alternative fuel sources. After peak oil has reached its day of maximum production, it will subsequently start to decline and, eventually, our reserves of this valuable fossil fuel with be completely depleted, leaving us to find other alternatives to power our homes and drive our cars, for instance.

M. King Hubbert, in the year 1956, predicted the US peak oil would occur in late 1960’s. This prediction seemed accurate as US average annual production reached at a massive 9.6 million barrels per day and has fallen since then. However, after decades long decline and improvement in existing technologies and successful application of massive hydraulic fracturing, the US oil production hit 9.7 million barrels per day in April 2015. Now, this made Hubbert’s prediction of decline after reaching its peak, incorrect.

I’d put my money on the sun and solar energy. What a source of power! I hope we don’t have to wait until oil and coal run out before we tackle that.
– Thomas Edison

According to PeakOil.com, Peak oil theory states: that any finite resource, (including oil), will have a beginning, middle, and an end of production, and at some point it will reach a level of maximum output .

What are the Problems With Being Reliant on Oil?

Oil is a fossil fuel, which means that, for many millions of years, old organic matter from creatures and plants that used to live on the surface on the Earth has been breaking down and has created this viscous liquid that we use to power our cars, amongst other things. It is a non-renewable source of energy, which means that supplies are limited and that, once it is gone, we will have to find alternative means of powering and heating our homes. Although it works very well as a source of energy, there are some problems inherent in being reliant on oil.

If we remain reliant on oil, one day we will find that we have run out completely and can no longer power our cars. During the time leading up to this day, the price of oil will increase exponentially as demand increases and supply decreases. If we do not find alternative methods of maintaining our current lifestyles, we may run into a great many problems, including inability to travel and a lack of the creature comforts that we have become so accustomed to.

Oil, for the most part, needs to be drilled out of the ground, which means that its extraction carries with it a number of risks for the environment as a whole. Not all the oil that is drilled for is collected, and sometimes it can seep into water ways and, from there, into the ground. Creatures and plants in these water ways are very sensitive to changes in their natural environment, which means that spilling something as toxic as oil into a river or into the sea can be deadly for a huge percentage of the species that live there. Besides animals and plant life, humans can also end up ingesting oil that accidentally leaks into water systems, especially those that also feed into our reservoirs.

Offshore drilling for oil and other fossil fuels is one of the most dangerous jobs out there. Because oil rigs are set off shore and are miles away from support and help, if a fire or explosion occurs, the people working on the rig are very much at risk of death, smoke inhalation and other problems. Being reliant on oil, therefore, means that we are having to put the lives of our workers at risk every day in order to gather this vital resource that is having such a negative impact on the environment.

Because oil is often collected offshore as well as various other locations all around the world, it needs to be transported – sometimes many hundreds of miles – in order to get to its destination to be refined and later used as a fuel. Transportation of oil is difficult and can make the risk of spillage very high. Oil spillages can have a dreadful impact on animals and the environment. One of the most common spillage types is that into an ocean, which not only affects fish and other aquatic animals, but also birds that hunt on the surface. These animals can have their fur and feathers caked in oil which is extremely difficult to get out.

What are the Implications of Peak Oil Theory?

Ever since ‘Peak Oil’ Theory was thought up, many people have begun to predict when exactly the peak oil event will happen. This can have a huge impact on economics and how the price of oil fluctuates.

As we near the day of peak oil, more and more people are going to feel compelled to stock pile oil so that they are not caught off guard when we eventually run out. This can artificially inflate the price of oil even before the event occurs, which has huge implications for the rest of the market.

Poorer countries that struggle to afford to offer power to their inhabitants will be the first to suffer when oil starts to run out. When the price starts to inflate with supply and demand, poorer countries are going to start struggling to be able to afford enough oil for all those who live there. This will have knock on effects later down the line.

With the decrease in output of oil over the months and years after peak oil, the industry that exists around the production, transportation and refining of oil is going to start crumbling. This means that many people will lose their jobs, many facilities will be shut down and may never be bought again and a huge number of specialist transportation vehicles and other essential equipment will be scrapped if it cannot be recycled. The oil industry is a huge and influential one, and, when it eventually starts to break down, it will leave a huge gap in the world market than will have to be filled by something else. This will cause some sort of power shift that we cannot possibly predict.

We need to be able to get around, whether by car, by train, by bus or by plane, and, so far, no feasible alternative has been thought up as a fuel for these modes of transportation. For those who desperately need to travel around the country or the globe in order to do their job or even see their loved ones, there seems to, at the moment, be no viable alternative to oil. Until we find this alternative, we need to start conserving our oil usage and investigating other fuel sources.