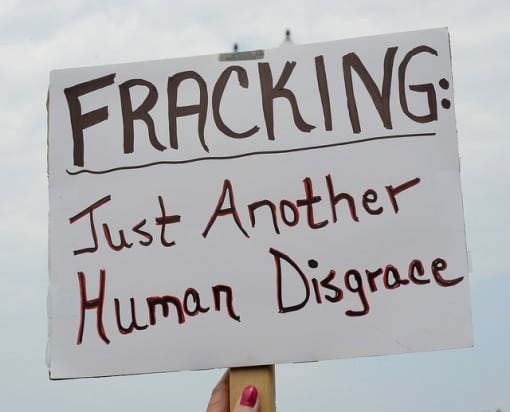 Hydraulic fracturing (also called hydrofracking or just fracking) is a process of deriving energy from the Earth that has been around for about the last 50 years, but is equally as controversial as it is useful. Developed in 1947 in the United States, hydraulic fracturing was a way of using the earth’s natural resources to obtain energy. In other words, hydraulic fracturing or fracking is the process of pumping millions of gallons of water, sand and chemicals underground to create enough pressure to crack or break apart the rock and release the gas. These wells containing natural gas start by drilling vertically (straight down) hundreds of thousands of feet below the land surface and then turning the drill so that it drills horizontally extending thousands of feet.

This is basically what hydraulic fracturing makes happen; it is a process designed to release and capture natural gases that can then be refined and distributed as an energy source.

The appeal of hydraulic fracturing is that it makes countries less dependent on Middle East and Asian countries that control some areas of oil production. As the last few decades have shown, rising oil prices can cause turmoil in an economy, so more and more countries look to domestic ways of producing energy.

According to the United States Environmental Protection Agency (EPA),

Hydraulic fracturing is a process to stimulate a natural gas, oil, or geothermal well to maximize extraction. The EPA defines the broader process to include acquisition of source water, well construction, well stimulation, and waste disposal.

Fracking is doable if there’s full disclosure of all chemicals used. Secondly, science dictates the policy rather than politics. Third, there’s collaboration between environmental groups and the natural gas industry.
– Bill Richardson

However, fracturing can also be used to:

Depending on the type of natural energy desired and the natural landscape where the operation occurs there are several types of gases that are mainly focuses of hydraulic fracturing:

See also  What is Environmental Health and Critical Issues Related to it?

Shale is a rock formation similar to slate, that is comprised of a variety of minerals, rocks, and mud or clay that occurs below the ground. Shale is most typically found near bodies of water, which is why offshore drilling is often the same or a similar process to hydraulic fracturing.

In order to form, the composites that make up shale are pressurized enough to bond together, making a solid piece of rock over time.

Since this occurs under the ground or in water, certain natural gases get caught in between the shale formations; the process of hydraulic fracturing was developed to remove this gas.

At its most basic, the process of hydraulic fracturing goes like this:

Hydraulic fracturing technique is used in “unconventional” gas production. A special stimulation technique or other special recovery process and technology is used to extract the gas that is highly dispersed in the rock rather than concentrated at a single place. It involves injection of large quantities of water, sand and chemicals at high pressure down a wellbore and into the target rock formation that helps keep the fractures open to allow oil and gas to be produced to the well.

Once the injection is completed, the pressurized mixture enlarge fractures within rock formation and can extend several hundred feet away from the wellbore. These fissures are held open by the sand particles so that natural gas can flow up the well. The internal pressure causes the fluid to return to the surface through the wellbore. The recovered water is stored in tanks or pits, then taken to treatment plant where it is treated and then disposed to surface waters.

Just as pressure is responsible for combining elements to form a rock, equal amounts of pressure can also be exerted to break that rock apart, releasing the gas that was trapped in between.

What Types of Solutions are Used in Hydraulic Fracturing?

Chemicals added to water for fracturing purposes include:

When added to water, these solutions take a number of final forms:

Most of these fluid types are designed to be flushed out once the actual process of breaking down the rocks is completed.

What Areas of the World use Hydraulic Fracturing?

As concerns about energy rise with growing populations and technological advances, more and more areas around the world are looking to hydraulic fracturing to supplement traditional energy sources.

Of course, since this process is tied to the formation of natural rock, it is only possible to do so in areas of the world where these rock formations exist. However, natural shale formations can be found on just about every continent.

Coalbed methane has become popular in a number of regions as well:

There are a number of locations around the world that have tight oil resources that haven’t been developed, and many countries are looking to this as a global solution for energy dependence.

The Controversy Behind Hydraulic Fracturing

While this form of energy production is gaining in popularity around the world to reduce global dependence on oil producing regions, there are many who cite a number of reasons for concern about hydraulic fracturing.

Additionally, many environmental groups cite a number of concerns about the effects hydraulic fracturing can have on the environment, including: