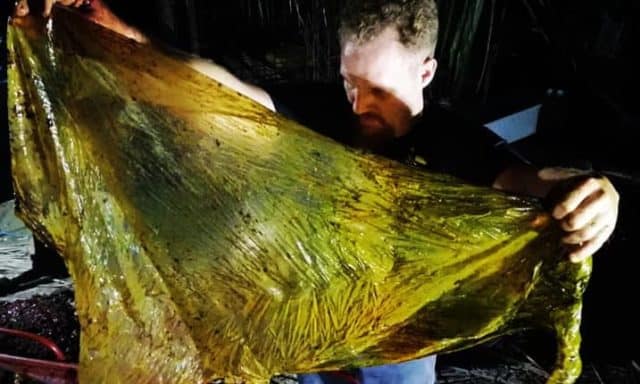 Plastic bags weighing 40 kg killed a juvenile male Cuvier’s beaked whale by causing “gastric shock.” The whale that washed up in the Philippines ingested a shocking amount of plastic and other bags and died.

It was shocking for Marine biologists and volunteers from the D’Bone Collector Museum in Davao City, in the Philippine island of Mindanao when they discovered the brutal cause behind the death of the young Cuvier’s beaked whale that decayed last Saturday ashore.  They received the notification about the carcass of the whale found in Mabini, Compostela Valley on Friday and the team subsequently performed a necropsy after taking the body to its facility, as reported in CNN.

According to the Museum’s Facebook page about “40 kilos of plastic bags, including 16 rice sacks, 4 banana plantation style bags and multiple shopping bags” was discovered in the stomach of the whale after conducting an autopsy.

Images from the autopsy are clear evidence of the endless piles of rubbish found inside the animal that is said to cause “gastric shock” after being ingested by the whale.

The D’ Bone Collector Museum biologists who conducted the autopsy said it was “the most plastic we have ever seen in a whale.”

“It’s disgusting,” they added. “Action must be taken by the government against those who continue to treat the waterways and ocean as dumpsters.”

It’s not just about the Philippines but oceans of the world are facing this biggest issue of present times, and that is plastics causing warming up of oceans, the rise in sea levels, pollution, the death of countless marine creatures, disturbance in the marine ecosystem and many more.

In south-east Asia the use of single-use plastic is widespread. According to the 2017 report by Ocean Conservancy, the plastic dumped into the ocean by the five countries namely China, Indonesia, the Philippines, Thailand, and Vietnam are more than the rest of the world altogether, and that is around 60 percent of the plastic waste found in oceans.

“I was not prepared for the amount of plastic,” Darrell Blatchley, the Marine biologist and the founder and president of the D’Bone Collector Museum, told broadcaster CNN. “It was so big, the plastic was beginning calcification.” The whale was found “showing signs of being emaciated and dehydration” and had been “vomiting blood before it died.”

He added that cetaceans, an aquatic mammals family which includes whales and dolphins obtain their water from the food they intake without drinking water from the ocean. The whale was unable to consume sufficient food because of the ingested plastic and therefore, died of “dehydration and starvation.”

Blatchley said, out of the dead whales and dolphins they examined in the last ten years, 57 were found to have died because of rubbish and plastic accumulated in the stomachs of these marine animals.

A pilot whale that died in June last year in southern Thailand swallowed more than 80 plastic bags weighing up to 8kg (18lb). As per the estimation of marine biologists, nearly 300 marine animals including pilot whales, dolphins, and sea turtles perished in Thai waters each year after plastic ingested by these aquatic creatures.

The incident happened soon after the UK government revealed in a report that the plastic level in the ocean could rise three times in a decade if actions are taken to curb the litter.

Prof Edward Hill from the UK National Oceanography Centre told BBC News: “The ocean is critical to our economic future. Nine billion people will be looking to the ocean for more food. Yet we know so little of what’s down there.

“We invest a lot of money and enthusiasm for missions to space – but there’s nothing living out there. The sea bed is teeming with life. We really need a mission to planet ocean– it’s the last frontier.”

The chief scientist for the UK government’s environment department Ian Boyd, agreed to that saying: “The ocean is out of sight, out of mind.”