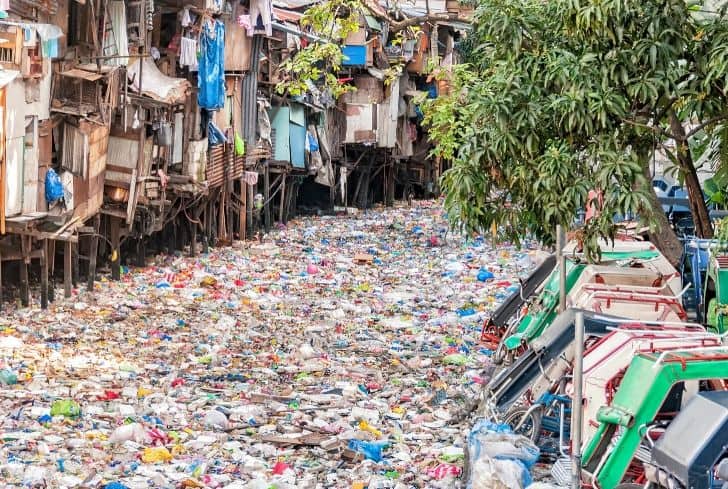 Whether one likes it or not, pollution is one of the most ignored concepts in the modern world. Here are some shocking facts on pollution which give a quick glance through of how this destroyer is up to creating havoc on the earth.

Pollution can be described as contamination of air, water, and soil by the introduction of a contaminant into a natural environment, usually by humans that are harmful to living organisms. The most common forms of pollution are air pollution, water pollution, agricultural pollution, and land pollution.

Pollution is the introduction of contaminants into the natural environment that cause adverse change. Pollution can take the form of chemical substances or energy, such as noise, heat or light. Pollutants, the components of pollution, can be either foreign substances/energies or naturally occurring contaminants. Pollution is often classed as point source or nonpoint source pollution. In 2015, pollution killed 9 million people in the world.

Below are 71+ Shocking facts on Pollution

Fact 1: Pollution is one of the biggest killers, affecting more than 100 million worldwide.

Fact 3: 5000 people die every day as a result of drinking unclean water.

Fact 4: The garbage dumped in the ocean every year is roughly around 14 billion pounds. Plastic is the major constituent.

Fact 6: People who live in high-density air pollution areas have a 20% higher risk of dying from lung cancer than those living in less polluted areas.

Fact 7: Approximately 46% of the lakes in America are extremely polluted and hence risky for swimming, fishing, and aquatic life.

Fact 8: In the great “Smog Disaster“that happened in London in the year 1952, approximately four thousand people died in a few days due to the high concentrations of pollution.

Fact 10: The Mississippi River dumps 1.5 million metric tonnes of nitrogen pollution in the Gulf of Mexico every year.

Fact 11: Every year, around one trillion gallons of untreated sewage and industrial waste is dumped in the U.S water.

Fact 12: Children contribute to only 10% of the world’s pollution but are prone to 40% of global disease.

Fact 13: More than 3 million kids under the age of 5 years die every year due to environmental factors like pollution.

Fact 14: Composting and recycling alone have prevented 85 million tons of waste from being dumped in 2010.

Fact 15: China is the world’s largest producer of carbon dioxide. The United States is number 2.

Fact 16: Almost 80% of urban waste in India is dumped in the river Ganges.

Fact 17: Noise pollution is the most neglected type of pollution.

Fact 18: The amount of money invested in the nuclear test could be used to finance 8,000 hand pumps, giving villages across the third world access to clean water.

Fact 19: Acidification of the ocean is the worst type of pollution. Oceans are becoming more acidic due to greenhouse emissions from fossil fuels.

Fact 20: Livestock waste majorly contributes to soil pollution. During monsoon, water runs over the fields carrying dangerous bacteria from the livestock into the streams.

Fact 21: More than 100 pesticides in any medium – air, water or soil can cause birth defects, gene mutation, and cancer.

Fact 22: There are more than 73 various kinds of pesticides in the groundwater, which is used as drinking water.

Fact 23: There are more than 500 million cars in the world, and by 2030 the number will rise to 1 billion. This means the pollution level will be more than double.

Fact 24: Major oil spills like those in the Gulf of Mexico, is the worst type of pollution due to consistent oil spills in the water body, which spreads everywhere else.

Fact 25: House owners use chemicals that are 10 times more toxic per acre than the amount used by the farmers.

Fact 26: Around 1000 children die in India every year due to diseases caused by polluted water.

Fact 27: In India, the Ganges water is gradually becoming septic, mainly due to the dumping of half-burnt dead bodies and enshrouded babies.

Fact 28: 88% of the children in Guiyu, China, suffer from various respiratory diseases as the area they live in is a huge e-waste site.

Fact 29: Antarctica is the cleanest place on Earth protected by anti-pollution laws.

Fact 30: Scientific research has proven that carbon dioxide emissions are lowering the pH of the ocean and are acidifying them even more.

Fact 31: A single-car generates half a ton of CO2, and a NASA space shuttle releases 28 tons of C02.

Fact 32: Americans buy more than 29 million bottles of water every year. Only 13% of these bottles are recycled every year.

Fact 33: Tsunami in Japan during the year 2011 has created debris of 70 miles, which consists of cars, plastic, dead bodies and radioactive waste.

Fact 34: Cadmium is a dangerous pollutant that kills fetus’ sex organ cells. It is widespread in many things that we eat and drink.

Fact 35: It takes only 5 days for a jet stream in China to carry air pollution to the United States.

Fact 36: Pollution in China can change the weather in the United States.

Fact 37: World Health Organization (WHO) estimates 6400 people die every year in Mexico due to air pollution.

Fact 38: A single person in the United States produces 2 kilograms of garbage every day.

Fact 39: The UAE is one of the biggest waste producers and water consumers.

Fact 40: For every 1 million tons of oil shipped, approximately 1 ton oil gets wasted in the form of spills.

Fact 41: Most of the hazardous pollutants that are discharged in the atmosphere each year are released to surface water, groundwater, and land, combined.

Fact 43: Chronic obstructive respiratory disease (COPD) that develop due to indoor air pollution is responsible for the death of more than 1 million people every year.

Fact 44: The people more susceptible to high ozone levels are children, elderly, people with lung disease, and people who are active outdoors.

Fact 45: A glass that is produced from recycled glass instead of raw materials can reduce related air pollution by 20% and water pollution by 50%.

Fact 46: If you think that you don’t smoke and you will be spared by lung cancer, just remember that your lungs or heart may be similarly damaged simply from exposure to ozone and particulate matter.

Fact 47: Places that are near to high traffic roads, seaports or railyards are a dangerous place to live or work as they contain more concentrated levels of air pollution.

Fact 48: In cities, where there are huge traffic and vehicles run bumper-to-bumper, the pollutants in the air can seep into your car, making the air you breathe inside your car up to 10 times more polluted than typical city air.

Fact 50: In the U.S., 41% of all insecticides are used on corn. Eighty percent of these are used to treat a pest that could be controlled simply by rotating the corn for one year with any other crop.

Fact 51: Public transportation and carpooling can help you to reduce air pollution and save money up to a great extent.

Fact 52: Animal agriculture is responsible for 18 percent of greenhouse gas emissions, more than the combined exhaust from all transportation.

Fact 55: Animal agriculture is responsible for up to 91% of Amazon’s destruction, including livestock and feed crops and 136 million rainforest acres cleared for the same. Up to 137 plant, animal and insect species are lost every day due to rainforest destruction.

Fact 56: Livestock is responsible for 65% of all human-related emissions of nitrous oxide – a greenhouse gas with 296 times the global warming potential of carbon dioxide, and which stays in the atmosphere for 150 years.

Fact 57: Livestock and their byproducts account for at least 32,000 million tons of carbon dioxide (CO2) per year or 51% of all worldwide greenhouse gas emissions.

Fact 59: Cows produce 150 billion gallons of methane per day. Even without fossil fuels, we will exceed our 565 gigatonnes CO2 limit by 2030, all from raising animals.

Fact 60: The U.S. Methane emissions from livestock and natural gas are nearly equal.

Fact 61: Livestock operations on land have created more than 500 nitrogen flooded dead zones around the world in our oceans.1/3 of the planet is desertified, with livestock as the leading driver.

Fact 63: A person who follows a vegan diet produces the equivalent of 50% less carbon dioxide, uses 1/11th oil, 1/13th water, and 1/18th land compared to a meat-lover for their food.

Fact 67: In the U.S., livestock produce 116,000 lbs of waste every second and 7 million pounds of excrement are produced by animals raised for food every minute.

Fact 71: Converting to the wind and solar power will take 20+ years and roughly 43 trillion dollars.

Fact 72: Cleanups can save animals’ lives and discourage people from littering in the future. You can take the initiative and host a cleanup program.

If these statistics are enough to give a wake-up call, then, even more, needs to be done beyond that. Step ahead and stop pollution yourself today!