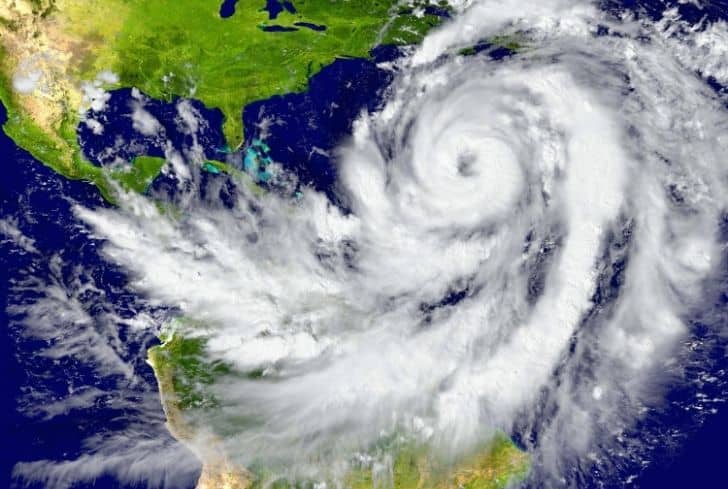 Hurricane is a natural disaster with far-reaching consequences. It takes away the lives of millions of people and causes damage to almost all of human creation. It can cause extensive damage to coastlines and several hundred miles inland due to heavy rainfall.

Floods and flying debris often play havoc in the lives of people living along with coastal areas. Slow-moving hurricanes produce heavy rains in mountainous regions. Landfall and mud-slides can occur due to excessive rain. Chances of flash floods also brighten due to heavy rainfall. Below are some interesting facts about hurricanes.

What is a Hurricane?

Fact 1: The term ‘hurricane’ is derived from Taino Native American word ‘hurucane,’ which means the evil spirit of the wind.

Fact 2: The first hurricane that caused people to fly in it occurred in 1943 during World War II.

Fact 3: A tropical storm is a hurricane that travels for 74 miles per hour or higher than that.

Fact 4: Hurricanes are the only weather disasters, each of them having its own name.

Fact 5: Hurricanes are first formed in a warm moisture atmosphere by swirling above tropical ocean water.

Fact 6: The center of the hurricane, which is the ‘Eye,’ can be as huge as 32 kilometers. The weather in this center (the eye) is usually calm with low winds.

Fact 7: The ‘Eye Wall’ is the ring of clouds and thunderstorms occurring closely around the eye. This experiences the most terrible hurricanes with extremely heavy rains.

Fact 8: A huge hurricane can release energy equivalent to 10 atomic bombs per second.

Fact 9: Hurricanes also produce mild tornadoes, which can last up to a few minutes.

Fact 11: Hurricane Floyd, which was barely a category I hurricane, has destroyed 19 million trees and has caused damage of more than a billion dollars.

Fact 12: Many people die in hurricanes because of the rising seawater that enters the mainland, instantly killing people.

Fact 13: Hurricanes in the Pacific Ocean are known as typhoons.

Fact 14: In the Indian Ocean, they are typically known as tropical cyclones.

Fact 16: The year 2005 saw the most hurricanes ever to form in a single Atlantic season, with 15.

Fact 17: The least number of tropical storms happened in 1983 when

just four storms formed. In 1982, just two hurricanes formed, making it the year with the least amount of hurricanes since 1968.

Fact 18: The first person to give names to hurricanes was a weather forecaster from Australia named C. Wragge in the 1900s.

Fact 19: The first hurricane of the year is given a name beginning with the letter “A.”

Fact 20:  Hurricanes are named because it’s much easier to remember the name of a storm than using latitude and longitude. The tracking becomes easy. It also helps prevent confusion when there is more than one tropical storm or hurricane occurring at the same time.

Fact 21: The National Hurricane Center was the first organization that started assigning ‘female’ names to the hurricanes in 1953.  However, they stopped this practice in 1978.

Fact 23: Today, the list includes English, Spanish and French names because these languages are most commonly used by the countries in the Atlantic Basin. There are six lists of names. Each list is used in rotation every six years.

Fact 24: Since all of the traditional names had been used for 2005, the last six named storms were called “Alpha,” “Beta,” “Gamma,” “Delta,” “Epsilon,” and “Zeta,” the first six letters of the Greek alphabet.

Fact 25: A name is retired when the storm caused so many deaths or so much destruction that it becomes insensitive to use the name again. The World Meteorological Organization is in charge of retiring hurricane names and choosing new names.

Fact 26: The headline-making hurricanes of 2004 — Charley, Frances, Ivan and Jeanne have all been retired. They will be replaced by Colin, Fiona, Igor, and Julia when the list is used again.

Fact 28: Hurricane Katrina is one of the costliest category 5 type hurricanes, which has caused damage over $100 billion.

See also  What is a Tropical Cyclone? Its Formation and Structure

Fact 29: Hurricanes mostly occur from June to November when seas are the warmest and most humid, forming conducive weather for the hurricanes to build up.

Fact 30: In the Atlantic Ocean, hurricanes begin from 1st June, and in the Pacific, they start in mid-May. Both end together towards the end of November.

Fact 31: An average hurricane season based on data from 1968 to 2003 brings 10.6 tropical storms. Six of those become hurricanes and

Fact 32: Planet Jupiter has a hurricane that appears as a red dot in it, spinning since 300 years. This hurricane is bigger than the earth itself.

Fact 33: Hurricanes are large enough to carry winds that travel for 160 miles per hour.

Fact 35: 90% of the deaths that occur during hurricanes is because of the floods created by this disaster.

Fact 36: A hurricane that occurred in Bangladesh in 1970 took away the lives of one million people. This hurricane is supposedly the worst tornado, in terms of loss of life.

Fact 37: The winds in the hurricane can cause above 2 million trillion gallons of rains per day.

Fact 38: In years with an El Niño, fewer tropical storms and hurricanes appear because vertical shear increases during El Niño years. The vertical shear can prevent tropical cyclones from forming and becoming intense.

Fact 39: In years with La Niña (opposite of El Niño), researchers have found that there are chances of an increased number of hurricanes and an increased chance that the United States and the Caribbean will experience hurricanes.

Fact 40: Hurricanes upon entering the land bring in strong winds, heavy rains and waves which are strong enough to cause damages like washing away the entire cityscape. These are known as storm surge.

Fact 41: Florida is hit by at least 40% of the hurricanes that occur in America.

Fact 43: The Saffir-Simpson Hurricane Scale defines hurricane strength by categories. Hurricanes are categorized into 5 types, depending upon their wind speed and their capacity to cause damage. The wind speed of the 5 categories is as follows.

Fact 44:  A Category 1 storm is the weakest hurricane with winds having speed between 74-95 mph; a Category 5 hurricane is the strongest with winds greater than 155 mph.

Fact 45: The deadliest hurricane is the category 4 hurricane that occurred in Texas and Galveston in the year 1990. 8000 people were found dead by the 15-foot waves, which carried winds traveling for 130 miles per hour.

Fact 46: It is believed that hurricanes have killed approximately 1.9 million people over the past 200 years.

Fact 49: Hurricanes need Coriolis Force to form, which is very weak at the Equator, and this is the reason that they cannot form near the Equator.

Fact 52: Cape Verde-type hurricanes are those Atlantic basin tropical cyclones that develop into tropical storms fairly close (<1000km or so) to the Cape Verde Islands and then become hurricanes before reaching the Caribbean.

Fact 53: It is a myth that opening windows will help equalize pressure in your house when a hurricane approaches. Your windows should be boarded up with plywood or shutters. If your windows remain open, it will just bring a lot of rain into your house and flying debris into your home, too. Don’t waste time taping your windows, either. It won’t help prevent hurricane damage.

Fact 54:2020 Atlantic hurricane season activity is projected to be extremely active, according to the team at Colorado State University (CSU) with 24 named storms (including the nine named storms that already formed as of July 4), 12 hurricanes, and 5 major hurricanes, with above-normal probability for major hurricanes making landfall along the continental United States coastline and in the Caribbean.

Fact 55: Hurricanes kill more people than any other type of storm.

Hurricanes are natural disasters and, unfortunately, cannot be controlled by man. However, we can prepare ourselves for future precautions to safeguard ourselves against such calamities, although this is remotely possible.