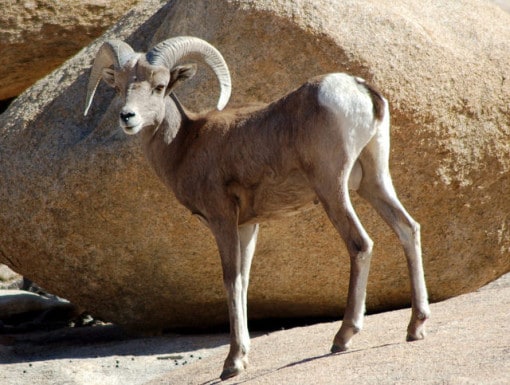 Deserts can be a deadly place for any living thing including plants. With little rainfall and a scorching sun, these animals have gone through incredible measures in order to adapt. Surviving in these harsh, unforgiving environments has given these animals an evolutionary edge. While birds and large mammals migrate up to the mountains to prevent themselves from scorching heat, smaller animals cannot migrate and keep themselves cool by seeking out shady places.

Many animals like snakes, invertebrates, and rodents rest during the day when it gets really hot and look out food during the night. Most of the animals reduce their day activities by resting in the shade during hottest part of the day. From Scorpions to venomous snakes, and even terrifying tarantulas, this list will educate and fascinate even the most squeamish of readers.

1. Scorpions: We’ve started this list off with a deadly one. These little creatures are predatory arthropod animals. That means they have an exoskeleton and they’re territorial. Only 25 types of scorpions have venom that is deadly to humans. The venom is stored in glandular sacs. Despite the fact that venom is deadly, it can be used for medical purposes.

2. Bighorn Sheep: These sheep originate from North America. There horns can weigh up to 30lbs. Bighorn sheep are found almost anywhere, including deserts. They are an endangered species. Native Americans use to cherish these animals and integrated them into their culture.

3. Desert Tortoise: Native to the Mojave and Sonoran deserts. A desert tortoise can live up to 80 years. They tend to be most active after seasonal rains, spending most time in burrows and rock shelters. The males are bit larger than females.

4. Horned Viper: Yikes! This one is just as deadly as the scorpion, but twice as long! This snake can average a length of 85cm. They favor dry, sandy areas.

5. Gila Woodpecker: These live in the Sonoran desert. They are really quite beautiful with unusual zebra stripes on the wings.

6. Camel: Here’s another well know desert animal. This animal is identified by the humps on its back. The average life expectancy is about 50 years. The camel can run at 40mph in short burst. A thick coat insulates them from the intense heat. The coat also helps prevent sunburns by turning a lighter color.

7. Tarantula: It was only a matter of time before these nightmarish things came onto the list. There are 900 creepy species of these things. Some people like them as pets, but some people are crazy. Tarantula means wolf spider. However, other than scaring everyone around you, these spiders are actually harmless to humans. At least that’s what they say.

8. Hyena: Originating in the jungles of Miocene, there are 30 known species. Surprisingly, not much is known about them. There are carnivores and many are going extinct, with some species already extinct.

9. Javelina: This is a pig. They’re omnivores from Central and South America. They make a chattering noise by rubbing their tusk together, this wards off other animals. They are social animals that live in herds.

10. Rhinoceros: These are large herbivores known for their thick, sharp horns. Sadly, these creatures are killed and their horns sold on black markets. There are different species of “rhinos” including, White, black, Indian, Javan, and Sumatran.

11. Owls: Yes owls live in desert areas. There are 200 species of owl. These things are awesome! They can rotate their heads 270 degrees. The largest species of owl is the Great grey owl, eagle owl, and the Blakiston’s fish owl. The smallest is the elf owl which weighs 31 grams and measures 13.5 cm.

12. Lynx: This is a beautiful cat. The name means: light, brightness it refers to their reflective eyes. This desert cat is the most endangered cat species in the world. The species are Eurasian, Canada, Iberian, and bobcat. This is a solitary animal that lives in dens or under ledges.

13. The Gobi Jerboa: Discovered in 1925 this desert loving rat, is a native to china and Mongolia. They mate between May and August. They are a night time creatures and eat seeds, insects, roots, and larvae.

14. Armadillo: They have a leathery armored shell. The name armadillo means, little armored one. Their diets consist of insects and grubs. Their body temperatures are relatively low, avenging at 36 degrees Celsius or 97 degrees Fahrenheit. The main defense they have is there armored skin. Though most flee when faced with predators.

15. Chuckwalla: These are large sized lizards. They are chunkier than most large lizards. Their sex is defined by their color. Males have Reddish-pink, orange, yellow, or light gray bodies. Females have spots or patches of dark gray or yellow. These lizards are harmless to humans and will run from predators.

16. Carcacara: These are members of the falcon family. However, they are slow in comparison and tend to scavenge for food rather than hunt it. They are found in south and Central America.

See also  4 Surprising Signs Solar Panels Are Right For You

17. Echidna: These mammals are called spiny anteaters and are particularly unusual because they lay eggs. As their name implies, Echidna eat ants, termites and other bugs by snatching them up with their long sticky tongue. They can be found in Australia, New Guinea and Tasmania.

18. Frogmouth: Nocturnal birds, they are named for their large flattened hooked bill and their huge frog like mouth which they use to capture insects. They can rest horizontally on branches during the day.

19. Hyrax: Also known as Dassies. They are herbivore mammals. They have multi-chambered stomachs that allow bacteria to break down tough plant materials. Rubbery pads cover the bottom of their feet. These pads have numerous sweat glands which help the animal maintain its grip when quickly moving up steep, rocky surfaces.

20. Pronghorn: Indigenous to Western and Central America, the pronghorn is not an antelope but it is often known in North America as the pronghorn antelope because it resembles the antelope of the old world. They eat plants and other grasses.

21. Vulture: These scavengers are probably the most commonly known of all the scavenging birds. They’re usually depicted as being evil, especially movies involving animals, because they feed on dead animals. Vultures are divided into two different groups because research has shown that not all vultures are alike. A group of vultures can be called by a variety of names including kettle, wake, venue or even a committee. Usually the name depends on the activity of the group. For example, vultures in flight are called a kettle, while a group that is resting in the trees can be called a venue or committee. Wake is reserved for a group of vultures that are feeding.

22. Addax: An Addax is a white antelope. They live in the Sahara desert. These pale antelope have twisted horns that actually look awesome. Females are typically smaller than males and are sexually mature by two or three years of age. Their coat color varies with the season. Being sandy white in winter and pale white in summer.

23. Bearded dragon: The bearded dragon, or pogona, is a species of lizard. These lizards originate from Australia. They use a head bobbing display to show dominance.

24. Crow: Crows are found everywhere. They are nuisances to farmers and neighborhoods. They eat crops and trash. They carry many diseases which are transferable. There are many species of crow and they typically live up to 20 years.

25. Sand Cat: Also known as the sand dune cat. This small cat is indistinguishable from a normal house cat. Though it is a bit bigger than that. This cat lives in the deserts of North Africa, Southwest and central Asia. Since 2002 this animals has been listed as near threatened.

See also  Is Metal Biodegradable? (And Harmful to Environment?)

26. Toad: Toads are associated to have drier skin than frogs. Though the difference between frog and toad are made only through different cultures and not scientific measures. One could argue that toads are slightly bigger than frogs. However, that would depend on one’s perspective. A group of toads is called a knot, nest, lump, or knob.

27. Bobcat: Bobcats are mostly found in southwest desert and their color is a mixture of white, black, brown, and orange. The average bobcat is 3-4 feet long and about 2 feet tall. Bobcats have good hunting skills and mostly survive on rabbits, squirrels, mice, gophers,rats, fish and can even kill animals as large as deer.

29. Kangaroo Rat: The Kangaroo Rat is a cute little animal which have a plump, dumpy little body with large hind legs and feet. Their overall  length averages 9-14 inches. Kangaroo Rats are pale in color with light pastel shades of tan, cream and off-white. The tail has a white-tipped tuft at the end. The kangaroo rat lives in the desert scrub of the Mojave and Sonoran deserts of California and Arizona, and western through southern Nevada.

30. Cactus Wren: The Cactus Wren is usually found in the arid and semi-arid deserts of southwestern United States and the chaparral of southern California and northern Mexico. It is about 7-9 inches long. The Cactus Wren primarily eats insects, including ants, beetles, grasshoppers, and wasps. Both sexes look alike, are brown in color  and have a white stripe running over each eye.

Deserts are dangerous and mysterious places, these animals know that all too well. The extent of which they’ve had to adapt is a feat of extraordinary evolutionary measures. No animal has the same technique for survival. How amazing is that! These animals are truly something to be admired, appreciated, and above all, protected for many generations to discover and enjoy.