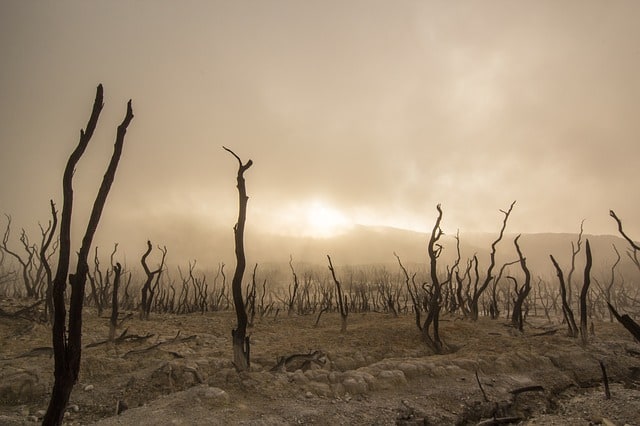 The dramatic, human-created transformation of the Earth’s natural landscapes is posing a horrible threat to ecosystems on which humans depend for their survival. Around one million species of plant and animal are now at risk of extinction, a new United Nations assessment has concluded.

Hundreds of international experts have compiled the 1,500-page report based on thousands of scientific studies on worldwide biodiversity loss and, the summary of its findings released Monday in Paris was approved by representatives from the US and 131 other countries. The full report will publish this year.

The human population is crossing over 7 billion and with that, activities such as farming, fishing & mining, poaching, and logging are altering the natural world at a rate “unprecedented in human history.”

According to the assessment, Global warming has emerged as a new parallel threat that contributed significantly to the decline in wildlife through shifting local climates that mammals, birds, fish, insects, and plants used to depend on. A growing number of species, like the Bengal Tiger, are closer to extinction as a result of the combined effect of damages caused to the environment by humans and climate change.

Innumerable reports have painted a gloomy picture of the Earth’s ecosystems. This report will provide far more detail on the close relationship between human well-being and the fate of other species.

“For a long time, people just thought of biodiversity as saving nature for its own sake,” said Robert Watson, chair of the Intergovernmental Science-Policy Platform on Biodiversity and Ecosystem Services, which conducted the assessment at the request of national governments. “But this report makes clear the links between biodiversity and nature and things like food security and clean water in both rich and poor countries.”

Nature provides non-monetized benefits to humans of around $24 trillion each year as the previous report by the group had estimated. The Amazon rain forest helps to slow down the pace of global warming by absorbing immense quantities of carbon dioxide. Wetlands purify the water for drinking. Coral reefs sustain tourism and fisheries in the Caribbean and a variety of medicines obtained from exotic tropical plants.

The annual crop production of $577 billion is at risk due to a decline in the number of wild bees and other insects that help in pollinating fruits and vegetables. Around 300 million people could be exposed to increased risk of flooding because of the loss of mangrove forests and coral reefs along coasts.

“It’s no longer enough to focus just on environmental policy,” said Sandra M. Díaz, a lead author of the study and an ecologist at the National University of Córdoba in Argentina. “We need to build biodiversity considerations into trade and infrastructure decisions, the way that health or human rights are built into every aspect of social and economic decision-making.”

The report warns of an emerging crisis of extinction. Compared to the past 10 million years, the extinction rates are currently tens to hundreds of times higher. Since 1500, minimum 680 species do not exist anymore, including the Guam flying fox and the Pinta giant tortoise of the Galápagos Islands.

“Human actions threaten more species with global extinction now than ever before,” the report concludes, estimating that “around 1 million species already face extinction, many within decades, unless action is taken.”

Unless nations take immediate action to protect the natural habitats that are left now, one-third of marine mammals, 40% of amphibian species, and one-third of reef-forming corals could vanish from the world.

Human activities such as the clearing of forests for agriculture, logging, the expansion of cities and roads; overfishing, hunting, water pollution and the transport of invasive species worldwide have caused global biodiversity loss over the last 50 years.

The replacement of rain forest with palm oil plantations in Indonesia has severely damaged the habitat of critically endangered orangutans and Sumatran tigers. Between 2009 and 2011 ivory poachers helped kill off nearly 7,000 elephants alone in Mozambique. In Argentina and Chile, the introduction of the North American beaver has destroyed native trees in the 1940s (but it helped other species thrive like the Magellanic woodpecker).

Global warming is expected to compound the damage from the burning of fossil fuels. In case there are 2 degrees Celsius rise in global average temperatures above preindustrial levels, five percent (approx.) of species are threatened worldwide with climate-related extinction.

“If climate change were the only problem we were facing, a lot of species could probably move and adapt,” Richard Pearson, an ecologist at the University College of London, said. “But when populations are already small and losing genetic diversity, when natural landscapes are already fragmented, when plants and animals can’t move to find newly suitable habitats, then we have a real threat on our hands.”

Nowadays fewer varieties of plants and animals are available to produce food. In agriculture out of the 6,190 domesticated mammal breeds used, 559 and more have gone extinct, and 1,000 more are threatened. In the future, the breeding of new, hardier crops and livestock that are resilient against pests and diseases could become tuff to resist extreme heat and drought as a result of climate change.

“Most of nature’s contributions are not fully replaceable,” the report said. Biodiversity loss “can permanently reduce future options, such as wild species that might be domesticated as new crops and be used for genetic improvement.”

There is still some hope as per the report. The governments have managed to fend off extinction in many cases through effective action to protect threatened species like the Arabian oryx or the Seychelles magpie robin. The initiatives of the nations like nature reserves and wilderness areas helped to protect the 15 percent and more of the world’s land and 7 percent of its oceans.

Still, protection of only a fraction of the most critical areas for biodiversity could be managed, and many nature reserves failed to take action against poaching, logging or illegal fishing. Besides, there is global warming and climate change.

It is not easy as the developing countries especially have no other way than exploiting their natural resources to try to lift them out of poverty.

“You can’t just tell leaders in Africa that there can’t be any development and that we should turn the whole continent into a national park,” said Emma Archer, who led the group’s earlier assessment of biodiversity in Africa. “But we can show that there are trade-offs, that if you don’t take into account the value that nature provides, then ultimately human well-being will be compromised.”

There will be several meetings under the Convention on Biological Diversity and a global treaty in the coming two years where the diplomats of the whole world will gather to discuss how they can accelerate their efforts at conservation. The biodiversity loss that is projected to accelerate through 2050, mainly in the tropics could only be slowed down by the nations worldwide, but they cannot stop it.

“At this point,” said Jake Rice, a fisheries scientist who led an earlier report on biodiversity in the Americas, “our options are all about damage control.”