Locust trees are a type of fast-growing flowering plant, belonging to the family of plants known as Fabaceae. Almost all Locust trees can survive for more than a hundred years and their wood is deemed harder than the strongest deciduous trees.

Commonly found variants of Locust trees include the Black and Honey Locusts. Both these trees are popular for their incredibly solid wood, their mildly fragrant flowers, and their vibrant foliage. However, these aren’t the only Locust Trees there is. In this article, we will discuss the top variants of Locust Trees that are widely found in different parts of the globe. 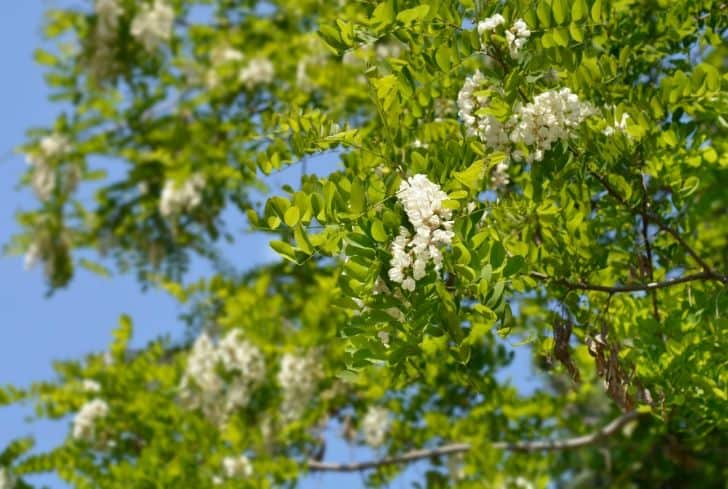 This is probably one of the most popular and common variants of Locust trees. In addition to having multiple uses, it is also extremely convenient to cultivate.

Unlike several other variants of Locusts, Black locusts grow rapidly in almost every kind of soil condition. They can withstand drought, inferior quality soil, and are found growing widely across the riverbanks and woodlands.

Native to the North American Region, these trees can assume a height of a whopping 80 feet. In most cases, however, they only grow between 40 and 60 feet with canopies spreading across 30 feet. The branches of these plants do not have a uniform pattern and in most instances, they leave gaps. This further makes way for excellent shade.

While Black Locusts are widely planted for their decorative use, they are also equally popular for their strong, hard, and solid variants of wood. At one point, the wood from these trees was used for crafting nails installed in ships.

Although the wood is extremely difficult to cut through, it is one of the best choices for firewood as it can easily burn over a long period. In several regions, it is also cultivated as a honey plant where it may bloom and thrive well. The flowers are an ideal source of nectar for honeybees in those specific regions.

To cultivate this plant, you will require a massive space that receives direct sunlight. As previously mentioned, the plant will grow easily even turning out to be fairly invasive in certain parts. To avoid this issue, you need to check the suckers once in a while, else the tree might soon end up dominating your free space.

In addition to space, you should also consider the drainage option while growing the plant. The Black Locust plant requires maximum drainage as it doesn’t thrive well in soggy soil. It can, however, adapt to the growing conditions of fairly moist soil, unless it is waterlogged.

The Black Locust Tree can also withstand poor quality soil, high levels of soil, and high air pollution levels. It is known to improve the quality of the soil where it is growing, extracting the nitrogen from the atmosphere and sending it back to the soil. Overall, the tree is quite hardy and easy to grow. 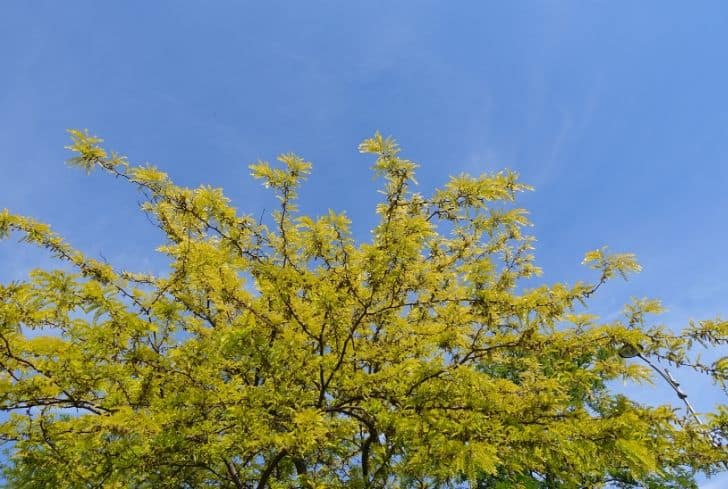 Widely known for its massive size, the Honey Locust is yet another fast grower that can withstand almost every kind of soil condition and environment. These trees can reach a whopping 100 feet in the wild and they usually grow around 40 to 70 feet during cultivation.

Honey Locusts have a massive spread that offers excellent shade in parks. They also feature tiny little leaves that do not need to be collected during the fall.

That is because they are extremely small and therefore won’t cause any blockage in your sewer or drainage unit. Given these unique benefits, Honey Locusts are popularly grown in municipal areas.

Unlike many other popular variants of Locust Trees, the Honey Locust originates in the United States. While they can grow in almost all soil conditions, the plants thrive best if the soil is moist. Besides, they also require high levels of salt and a balanced pH.

As with the Black Locust, planting these trees is quite simple. All you need to do is ensure that you are planting them in a large area that receives ample sunlight.

A unique attribute of the Honey Locust Tree is their leaves. Unlike the leaves of many other Locust plants, these are bright greenish with a yellowish tinge during the fall seasons. Once the leaves wither in the fall, the tree almost instantly proceeds to produce new leaves that are most pertinently visible during the Spring months.

The Honey Locust has thorns both in leaves’ base and as well as the branches. Initially green, these thorns take up a dark brownish hue and turn brittle with aging. They are also extremely sharp and can measure up to four inches in length. 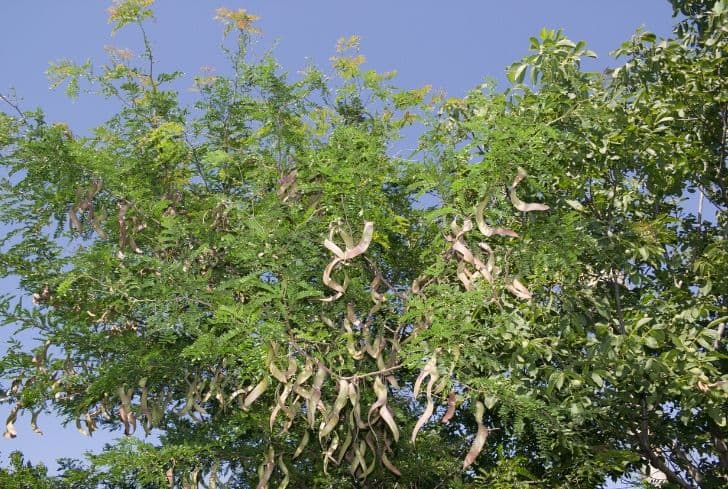 Growing to an average height of 45 feet, the Skyline Honey Locust is known to spread to up to 25 feet. It widely popular among shade trees and is best known for the delicate and yet ferny structure.

The fern-like structure also casts a dappled shade right under the tree that makes it fairly upright when it comes to growth. This very attribute also makes it an excellent street tree. It can grow tall, wide, and is consistently tolerant of every kind of weather condition.

The Skyline Honey locust originates from the North American region and it is basically a form of a deciduous tree with a unique and pyramid-like shape. The tree has excellent landscape composition and due to its texture, one can easily double it up as an accent in homes or offices.

Skyline Honey locusts are fairly low maintenance and you should ideally prune them in the winters after the cold has passed. The tree prefers thriving in complete sunlight and can perfect grow in both dry and moist soil conditions.

One of its defining features is that the tree isn’t finicky about the pH level and is tolerant of all kinds of salt.

The branches and trunks of the Skyline Honey Locust come with massive thorns that can go up to a whopping three inches. In late Spring, they grow a bunch of greenish-white and yellow flowers that are also accompanied by dark, long seedpods. The Seedpods come with seeds and another unique substance that is both sweet and chewy. 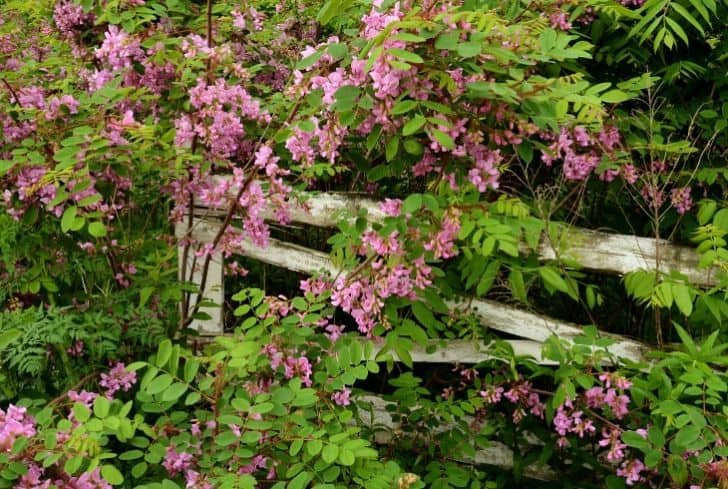 Alternatively known as the Moss Locust and the Rose Acacia, the Bristly Locust is a form of the deciduous and beautiful shrub. Traditionally found in the South Eastern parts of the United States, of late, they are also grown in multiple other regions and certain parts of North America.

Bristly Locusts have an average height of eight feet and they are known to be aggressive. Their shrubs are distributed across via suckers and are invasive in several parts of Ohio, Michigan, and Washington.

A defining feature of the Bristly Locust Tree is its beautiful green leaves that thrive on bristly stems. These leaves as well as the pinkish flowers exude a beautiful fragrance that often attracts butterflies, bees, and a range of other insects. Insects primarily thrive in these trees during the late Summer and Spring months, and in some instances, you might even observe the reddish-brown seedpods along with the flowers.

Bristly locusts thrive best in moist soils and loamy land laden with silt. Unlike the common variants of Locust Trees, these plants do not have that high of a tolerance level, and they properly only with moderate drainage.

The Bristly Locust is popular for its excellent erosion control. So, if you live in a site affected by erosion, you might consider growing the tree there. Such is the case because these trees have an inherent ability to provide thick and quick vegetation to almost all vital areas that require some degree of stability.

When the Bristly Locust had first originated, the natives started calling it the Cherokee. At that point, it was planted primarily for medicinal uses. While some individuals used it to treat toothaches, others brewed a tonic from it to feed cows.

The Bristly Locust is also known for its solid wood that is often used in constructing houses, fences, darts, and other artifacts. 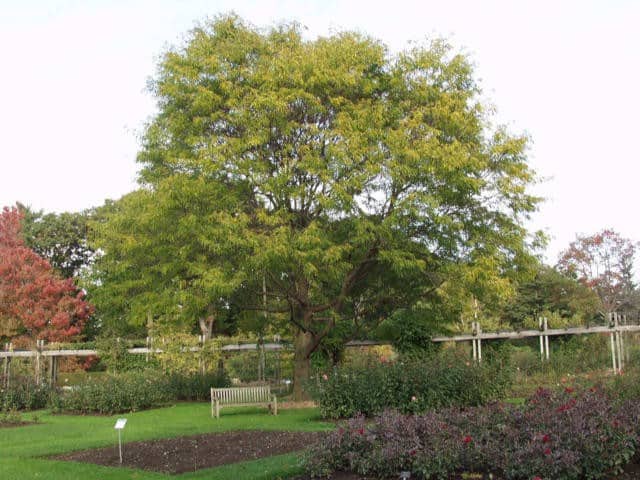 The Skycole Locust Tree features strong woods and dense foliage. It grows exceptionally fast and is found in several parts of the United States. Although the plant can comfortably thrive in almost all locations, it grows exceptionally well under adequate sunlight and woodlands. In some instances, it might also thrive well across streams.

The hardiness of this tree ranges from four to eight and it can grow anywhere between 40 to 50 feet. In terms of width, the black locust tree can spread up to a whopping 25 feet.

As with many other variants of Locusts, the Skycole Locust is both deciduous and hardy. It may be best defined as a fast-growing legume with multiple qualities that enable it to sustain in poor soil conditions, droughts, high salt levels, and pollution.

This tree features tiny green leaves with a mild tinge of blue. The leaves can grow up to 25 centimeters and are usually compound. The plant also produces striking white flowers with a dash of pink and purple. Flowers may be found hanging in a cluster measuring between four to twelve inches in length. 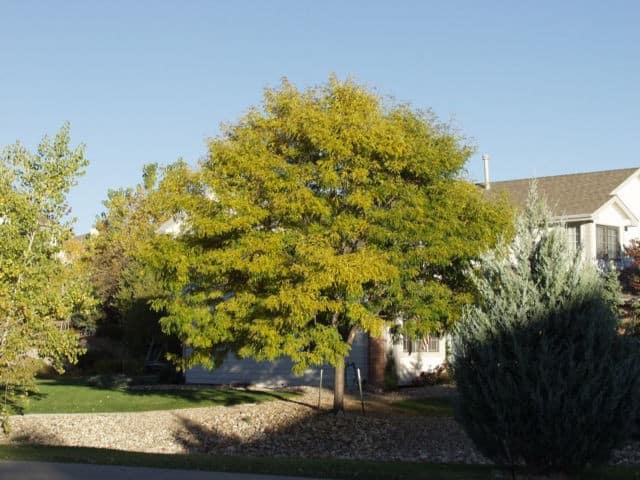 Belonging to the family of Honey Locusts, the Imperial Honey Locust is one of the most widely popular and fine variants of shade trees. It has multiple ferns and a perfectly delicate structure with a yellowish or greenish tinge. In addition to serving as a Lawn tree, the Imperial Honey locust also doubles up as a popular street tree.

When it comes to growth, the Imperial Honey locust has an average height between 30 to 40 feet spreading between 25 and 35 feet. They bloom during late summer and spring, between May to June.

While the plant can withstand multiple environments and soil conditions, it grows best in the full sun and moist soil. It is primarily used for decorative purposes, though, in some instances, it may be used in crafting furniture. 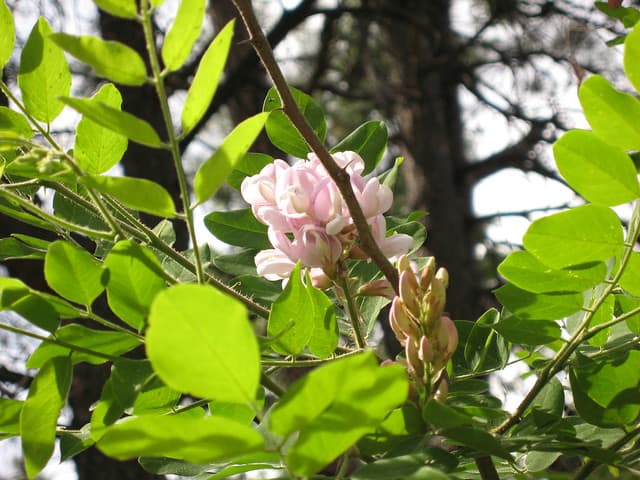 Despite being called the New Mexico Locust, this tree doesn’t originate in the Mexican regions. Instead, you will primarily find them in the South Western parts of the United States.

The New Mexico Locust may either develop into a tree or a dense shrub depending on the soil and the sunlight. Ideally, it grows up to 10 feet with stunning, large branches and dense batches of flowers. 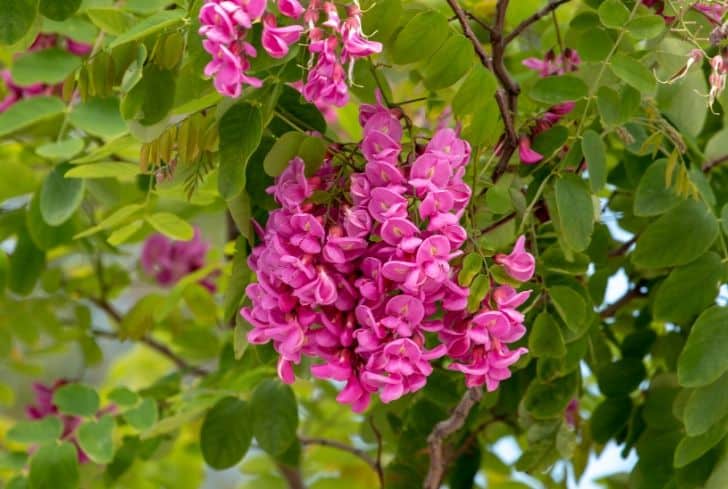 Belonging to the family of Black Locusts, this is one of the prettiest locust trees. Its leaves tend to change according to the different growth stages.

For instance, in the blooming stage, you will find bright green leaves with a tinge of purple. Again, when it is completely formed you will find bronze-colored leaves. The flowers of the trees are beautiful and offer an excellent contrast to pinkish and purplish shades. 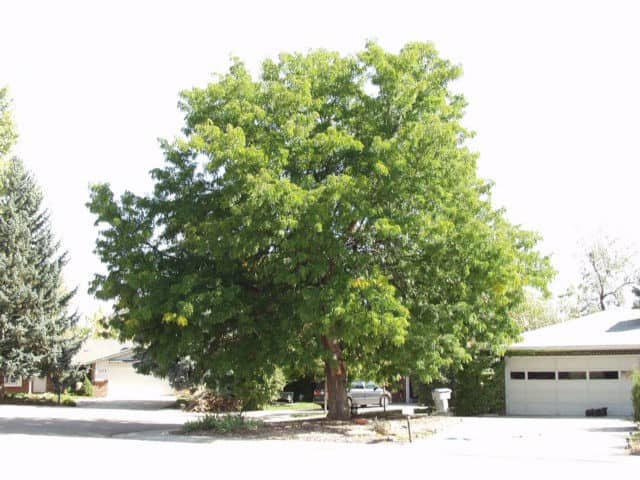 This is one of those variants of the Honey Locust that doesn’t boast thorns and are known to grow exceptionally fast. They grow up to an average height of 50 feet and do not bear fruits.

This makes it easier to maintain and grow when compared to other variants of Locust plants. Shademaster Honey Locusts feature green leaves that turn yellow during the fall season. Their flowers too have a yellowish tinge.

Well, these were some of the different variants of Locust Trees there is. Most of them can survive for 100+ years and their lumber is deemed extremely. As with common deciduous trees, the Lumber from Locust Trees too is often used for making furniture.

Black Locusts Are Native to the North American Region 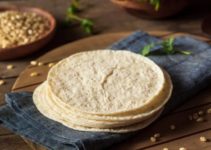 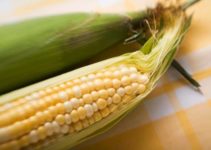 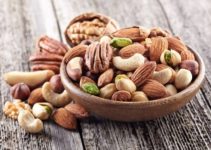 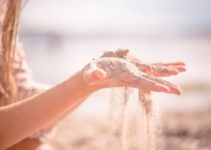 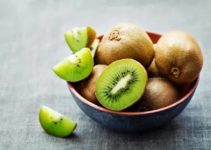 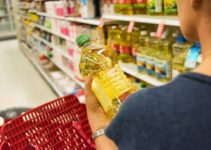