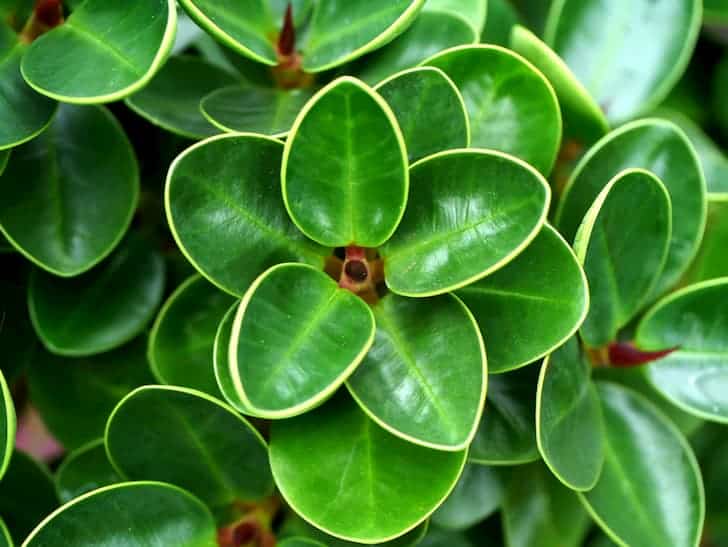 Fig trees belong to a unique tree species that usually produces around two to three fruit crops annually. The defining element of these trees lies in the fact that they are completely drought tolerant and come with multiple vital qualities. Originating from the Ficus genus, this tree was known to be first cultivated in the Eastern Mediterranean parts and certain parts of Western Asia almost 5,000 years back.

Fig trees can assume a height of up to a whopping 15 to 30 feet and although they do not have any specific care requirements, you need to prune them from time to you. If you are planning to cultivate the fig tree in a small container, you might also want to restrict its height by planting it in a container.

As you would probably guess from the name, this is probably the most common variant of Fig Tree there is. It is incredibly popular in the US, where many grow it in institutions and home gardens. The unique feature of these fig trees lies in the fact that they do not have any proper seeds. Owing to this fact, they do not require to be pollinated either. The Common Fig tree beats brown figs (also known as the Turkey figs) and the iconic Celeste Figs. Since they do not depend on pollination, you can practically grow them anywhere you deep fit.

Figs growing from the Common Fig tree can withstand insect attacks. They are also not susceptible to rotting as they do not feature any opening that can allow rainwater to penetrate which might latter affect the fruit. The Common fig is probably the only species of fig that can stay consistently good for an extensive period.

With an ability to withstand low temperatures 15 degrees F (or less) this is yet another Fig tree that is best known for its solid and hardy appeal. It also happens to be a variant of the common fig and is found widely across the Southeastern parts of the US.

The Celeste Fig produces fruits as well as small flowers. The fruits are extremely rich in sugar content and are therefore known as sweet figs. They usually start out green eventually assuming a brown purplish hue as they start ripening. If you find ripe fruit in your Celeste Fig tree consider removing it immediately and eat it the very day. You can, however, store the fruit if it is kept in a cool and dry spot.

The Celeste Fig is an excellent option if you are planning to cultivate your own figs because it is completely self-fertile. Thanks to this quality, it doesn’t require cross-pollination either, meaning cultivars will only require a single fig tree as opposed to two different trees for producing fruit.

The tree assumes a medium size and can grow up to 10 feet in height. It will, however, have a lesser height if you choose to keep it in a pot or container. The foliage of the Celeste fig is both large and lobed, and every individual leaf measures up to 1 foot in length.

If you’re planning to grow a lofty and incredibly tall fig tree, the Kadota Fig may be your answer. Growing up to 30 feet, this plant is best known for its beautiful skin with a yellowish-green tinge and a purplish pulp. This tree is best known for the preserves. Kadota figs are seedless and when you dry them they assume a light golden hue. They can tolerate cold and thrive best in hardiness zones 5 and 6. Kadota figs are also immensely attractive and they may be adaptable if you consider sheltering them.

While the Chicago Hardy is definitely not as popular as the Common fig or the Celeste, they are still deemed to be one of the hardiest fig trees ever. The branches of this tree can tolerate low temperatures of 10 degrees Fahrenheit, and its roots can withstand temperatures between 10 to 20 degrees Fahrenheit. While the plant may die during the colder months, as long as you insulate the roots with a heavy layer of mulch, they will once again recover during the spring months.

Chicago Hardies are known to produce fruits twice, on an annual basis. They usually bear small crops during the spring months, and the main crops during the early fall months. The fruits are best known for their sweetness and soft skin. The Chicago hardy can grow up to 15 plants and it serves as an excellent specimen plant for your garden.

This tree usually has moderate growth and can successfully grow up to 13 feet. They produce plenty of foliage and fruits most of which are known as Black Genoa figs or the Black Spanish figs. The Purple Genca usually features a dark purplish hue and a massive size. These plants are also known for their sweet and reddish flesh. These plants are also self-fertilizing meaning you can eat them dried or even fresh. The best part: you can also make jam with them. Purple gencas are grown by both commercial cultivars and home garden enthusiasts.

Usually pollinated by the caprifigs, the Smyrna is known to bear female flowers. Based on its geographical location, it is also interchangeably known as the Calimyrna fig tree. Both Smyrna and the Calimyrna are known for their soft and delicious tasting figs. These figs are also extremely rich in fiber content.

While consuming these figs fresh, you will notice their striking greenish-yellow hue. However, when you consider drying them, they will immediately assume a light golden hue. At this stage, they also taste like nuts.

Usually grown as a houseplant, the weeping fig is primarily found in areas with a mild climate. Native to the Asian and Australian regions, you can also grow it outdoors if your location has a cool and temperate climate. The Weeping fig is known to be Evergreen, meaning you can grow it as a shrub or as a tree. It has slender and drooping branches that are often decked with greenish leaves with pointed edges.

During summer months, this tree produces creamy and yellowish blooms that eventually develop tiny red figs. When grown indoors, these trees will rarely bear any fruit of flower. However, when grown outdoors, they are known to bear fruits at least twice a year.

In their native areas, these figs can assume a lofty height of up to 50 feet. However, when cultivated in home gardens, they are significantly smaller.

These figs bear two very unique kinds of crops every year. The first thrives on leafless, mature wood that doesn’t require any pollination. They are widely known as the Breba crop. The second on our list grows on New wood and require male flowers for a round of successful pollination.

Unlike the first crop that usually comes during the summer months, the second one is produced during the latter half of the year. Unlike its first counterpart, it requires constant pollination. In case it isn’t pollinated, the fruit naturally falls from the tree.

Unlike many other fig trees featured on this list, the Caprifig doesn’t produce any edible fruit. Instead, it primarily produces the male figs that are used for pollinating the female counterparts. Caprifigs are native to South European parts and South Western parts of Asia. They feature a thick skin, a body shaped like a pear, and plenty of tiny flowers that appear like small fruits. Caprifigs isn’t juicy and are also known to be semi-hollow. The inedible fruits of the tree are ripened thrice a year.

Assuming a height of up to 25 feet, the Brown Fig tree is best known for its extensive (almost invasive) spread. The tree also bears excellent tasting fruits and stunningly beautiful foliage. Unlike many other common variants of fig-trees, this one doesn’t bloom. The fruits of these trees come with dark purplish skin which is usually sold fresh. While growing this tree at home, you are likely to witness fruits during the late summer and spring months.

Growing in hardiness zones 9 to 15, the Creeping fig is best known as a climbing plant, that tends to cover up everything it comes across. Also popular as the Topical Ivy, you will find this plant sticking to walls, fences, and even the ground with its hardy aerial rootlets. These rootlets are also known to grasp almost anything they end up encountering.

Owing to their vigorous growth, these figs may be invasive if you allow them to thrive without getting them pruned. You should also closely watch this plant and prune it at least once a year to further ensure that it doesn’t end up covering the plants or trees in proximity.

With deliciously rich fruits, the Alma Fig Tree is yet another excellent tree that is primarily found in Mexican regions. The tree may not appear extremely appealing at the outset, but the fruits make up for it all! This tree is known to be sensitive to both the snow and the frost. So, if you are planning to grow it outdoors, consider moving it indoors during the particularly colder months. While Alma Figs are usually eaten raw, you can also make jams from them. The fruit is moderately sized with a yellowish hue and tiny seeds.

Primarily found in the Mediterranean regions, these figs feature a light-greened hue and pinkish flesh especially when you get them fresh. Since their sugar content is super high, the Adriatic figs that are directly grown on trees are later dried for preparing fig bars or pastes. These trees can self-pollinate, and they bear beautiful fruits with delicious pulp. While the tree can withstand almost all weather conditions, the fruit usually ripens between June and August.

Well, these were some of the most popular fig trees out there. If you’re planning to plant either of them at home, consider cultivating them in the accurate hardiness zone (ideally 8 or lower). If you live in an area where the temperature gets too cold during the winter months, consider planting the tree in a container and store it inside. Otherwise, you can plant the tree outdoors during the early months of Spring or late fall.