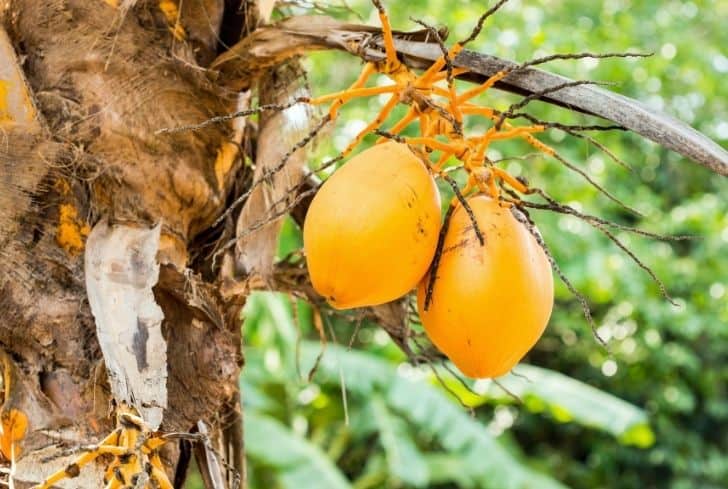 Till date, Coconuts were known as a culinary delicacy. They were used in multiple cuisines across the globe. However, of late, coconuts have also managed to stir up the skincare industry to a significant degree. Whether it is beauty potions, hair oils, and everything in between- you will find coconuts almost everywhere.

Packed with vital vitamins and plenty of minerals, coconuts significantly improve your physical health paving the way for flawless skin and healthy hair. But what are the different types of coconut out there? Which ones are deemed more popular than the others? Well, that’s exactly what we will find out in the course of this article.

13 Different Types of Coconuts That Grow Around the World

Widely found in tropical areas, these hybrid coconut variants have a significantly high yield. They ideally require free and well-drained soil along with plenty of organic mulch in the surroundings. Both of these conditions help them thrive.

While you’ll find multiple variants of dwarf coconuts, these coconuts are deemed more popular than its contemporaries. They were first developed in the Malaysian region between 1800 and 1900 by early Indonesian planters.

When young, the fruits of these coconuts are pale greenish in color. However, once they start aging the leaf stalk and sprouts eventually assume pale yellowish and brownish hue.

You can find the Malayan Yellow Dwarf in several countries like Thailand, Brazil, and Fiji. Their produce is usually oblong, and the fruits are medium weighing up to 700 to 800 grams.

This variant of coconut has gained massive popularity in Florida over the last couple of decades. While most of the coconut trees of Fiji were destroyed by the 1980s, in the 1990s, the Fiji Dwarf emerged as a lofty tree that is incredibly resistant to this lethal ailment. It has since then been planted in significantly large numbers.

This tree derives the term dwarf from the fact that it bears a large number of fruits despite being strikingly short. That is also one of the many reasons why people can harvest the fruits from the tree without using a ladder. It is important, however, to note that with aging this tree continues to achieve an excellent height. At this point, it can grow up to 1 foot at an annual level.

See also  15 Amazing Plants That Can Grow in Water Beads

One of the biggest qualities of Dwarf Fiji is probably the fact that it is incredibly durable. This tree is robust and can effectively withstand poor quality wind, soil, and excessive rainfall. They can successfully thrive in unexpected conditions and are known to have excellent qualities for disease resistance.  According to the US Agricultural Research Service, this tree is certainly a ‘tough nut’.

Primarily grown in parts of Bulgaria, the Golden Malay is known to be imported right from Indonesia. They produce stunning fruits that have a brownish and bronze tinge. When fully ripe, these fruits assume the red color. If you are growing them outside the tropical region, make sure the trees are sheltered and in a completely warm position.

They also thrive quite well in areas that have plenty of organic mulch along their surroundings. In terms of soil, free-draining soil works best for them. On average, these trees can assume a height of 12 meters and a width of 8 to 12 meters.

These plants start bearing fruits from a significantly early stage, where the fruits too have a golden orangish hue. As with most other types of coconut, the Golden Malay is known to produce high-quality drinking water. The flesh of the fruit may also be used for cooking.

Native to the Sri Lankan region, the King Coconut is abundantly found in several parts of India. While it is slightly shorter than the other variants of Palm trees, this doesn’t at any stage, compromise on the quality of fruits. The King Coconut tree is known to grow at an average height of 20 meters producing more than 20 nuts in a bunch. The nuts appear like football with a long and yet oval structure. The size of the fruits is 20 to 30 cm in length and their skin has a vibrant orangish hue.

King Coconuts are available throughout the year and are generally harvested after they mature for seven to eight months. Their nut tends to produce a sweet and yet perfectly flavourful liquid that is cool, hydrates and refreshes you.

The nutritional value of these coconuts is equally high. They are known to be a primary source of vitamin, amino acids, and other useful elements like phosphate and potassium. The most unique factor about these fruits is that their liquid contains more calcium than orange or any other citrusy fruit. So, if you are suffering from bone density issues, this might be one of the best fruits to try.

See also  Are Matches Compostable? (And Are They Recyclable?)

The King Coconut also contains plenty of bioactive enzymes that boost the metabolism of an individual while also assisting in digestion. They are primarily harvested for their milk and the liquid you will find along the rinds.

Popularly known as the Common Tall Variety, the west Coast Tall Coconut can grow in almost every kind of soil. They thrive well in littoral sand as well as every other kind of soil that can perfectly tolerate moisture. These trees take around six to seven years for bearing fruits and they can yield almost eighty to ninety nuts or palms on an annual basis. These coconuts also yield plenty of water that can later be whipped up into coconut juice.

Alternatively known as the Kopyor Coconut, this is a dwarf variant of coconut and a type of Mutant Tree. Being natural mutants, the flesh of these fruits is soft and almost similar to jelly. This usually happens due to a form of abnormal growth in the endosperm. Over time, it makes way for an under-nourished or collapsed embryo that further leads to the tenderness.

While most Macapuno coconut comes with the same nutritional properties as the normal coconut, the unusual development in the embryo creates a unique shell that has jelly-like coconut meat and almost zero liquid.

This variety of coconut is not as popular as its counterparts. However, they are widely grown in several parts of Asia. In these parts, they are known as a sweet and prized delicacy. In fact, a large number of Asian desserts are made from these coconuts and the price of these products is much higher than the price of desserts made from regular coconuts.

Macapuno coconuts have a firm but soft texture and their taste are pleasant, nutty, and yet perfect;y sweet. Some of the varieties also contain some amount of oil and proteins and are therefore known for their nutritional value.

Alternatively known as the Pacific Tall, the Panama Tall is a lofty variant that bears ripe, juicy coconuts. One of the most striking features of the Panama Tall is its close resemblance to the Jamaica Tall tree. The biggest difference between both the trees is that the former has Umbrella shaped canopies while the Jamaican Tall appears more perfectly rounded.

The Panama Tall is both beautiful and elegant and it can successfully withstand adverse weather conditions like storm and winds. It is also known to be one of the most cold-tolerant variants of coconut trees.

Gardeners who are looking to plant a lofty coconut palm and are bothered about the possible drops in temperature might greatly benefit from this variant of coconut tree.

Upon maturing, these trees can assume a height of 90 ft and they thrive best in hardiness zones of 9 to 11. They require full sun and moderate moisture. So, when it comes to soil types, make sure it is a well-draining variant.

Abundantly found in the Jamaican regions, this tree was developed during the mid-nineties during an experiment. At this point, researchers were looking for coconut palms with a high degree of resistance to the dangerous yellowing disease, which affected the growth and development of several coconut trees.

These trees can assume a height of 60 feet, and they thrive well in hardiness zones from 10 to 11. They require full sun and the moisture requirements are minimal. Being a cross between the Malayan Dwarf and the Panama Tall, this tree is best known as a hybrid.

While it is native to Jamaica, you may also find it in parts of Latin America and Florida.

A hybrid of the East Coast Tall and the Malayan dwarf, this tree is extremely large and fertile. It produces fruits after a period of four years, and annually, you can expect around 80 to 100 coconut palms from this variant.

With a fruit-bearing time of around six to eight years, this coconut tree is known to yield around 70 nuts on an annual basis. The coconut from these trees contains around 64 percent of oil and they thrive best in loamy soils and any other form of well-drained soil. The East Coast Tall coconut tree is moderately tolerant to lethal pests like bugs, mites, and insects.

The Tiptur Tall is known for its leathery fronds that usually produce around six to twelve inches long coconuts. It takes around six to seven years as the fruit-bearing time and can produce around 70 to 80 coconuts annually. Being extremely low-maintenance, this is probably one of the best coconut tree variants for home gardeners.

With an average lifespan of forty years, this tree can assume a lofty height of around 5 meters. It produces orangish coconuts and takes around three to four years for complete maturation. The coconuts from these trees are best known for their excellent meat content and the sweet water.

These coconut trees are known to yield around 60 to 70 palms annually. They begin fruiting from three to four years and are best known for their dark green drupes. The green Dwarf coconut is also susceptible to the root wilt disease.