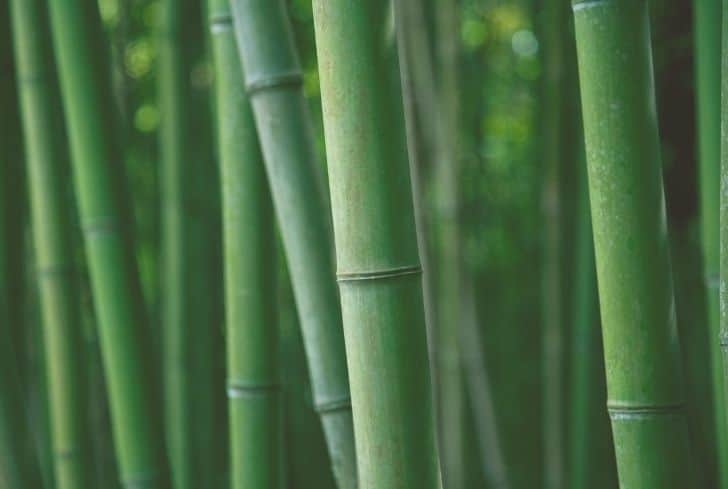 Whether you have an Oriental, beautifully tropical, or contemporary garden- there’s one set of plants that’ll perfect work with every kind of garden- bamboo. The bamboo is a lofty, beautiful, and spectacular plant that has been grown for a couple of centuries. In addition to serving as a privacy screen or hedge, this plant also perfectly fits the category of a feature plant.

Unfortunately, bamboos are often misunderstood by newbie gardeners who often shudder at the prospect of growing them at home. However, this shouldn’t be the case because bamboos, especially the clumping variants are extremely easy to grow and care for. While running species of this plant may get invasive when it is not contained properly, you can still manage it quite well if you follow the right guidelines.

In this article, we will clear all your doubts about bamboo trees by listing the 13 most popular variants of Bamboos for your home and garden.

Native to the Chinese regions, the Buddha Bamboo (Bambusa ventricosa) variant is widely popular for its lumpy nodes that are strikingly similar to Buddha’s bulging belly. Unlike the common bamboo trees that you’d see outside, the Buddha Bamboo primarily serves the function of an ornamental plant and is stored in small containers. It thrives best in soil that is consistently moist and fertile.

Over time, the culm of the plant bulges and takes an exaggerated proportion. This is the time when you should keep it without any excess fertilizer in completely dry soil. Since this is a tropical plant, it will grow naturally well in cool and temperate climates. If, however, you live in cooler zones, we would recommend you to keep the plant indoors. Since the Buddha Bamboo is primarily non-invasive it can also serve as an excellent privacy screen.

The Buddha Bamboo can grow up to a whopping 55 feet in height and it thrives best in USDA hardiness zones 9 to 12.

If you’re looking for a cute, non-invasive bamboo for your home, the Umbrella Bamboo (Fargesia murielae) might just be your perfect option. Completely non-invasive, this is an elegant and solid bamboo that is adaptable to almost all temperatures.

Featuring greenish-yellow canes, these bamboos are best known for their long and slender leaves. Their foliage appears dainty with greyish-green undertones and unlike many bamboos, it doesn’t need to be snapped or stalked. Umbrella bamboos grow rapidly and grow in clumps, most of which spread around 4 to 5 feet in terms of width. They prefer partial shade as direct sunlight might impact the texture of the leaves.

This bamboo assumes a height of up to 15 feet and they are both versatile and easy to grow. The best part: it is also highly non-invasive and elegant. Once you get this bamboo for your garden, you will realize how easy it is to maintain the plant. Umbrella bamboos are adaptable, and they also turn out to be exceptionally hardy.

The defining quality of these bamboos is their greenish-yellow canes that assume slender and slightly narrow leaves. The foliage appears dainty, with vibrant green hues on the top and grey-grey undertones at the bottom.

As the canes start growing, they take a gentle arc from their foliage’s weight. However, they do not require to be snapped, nor do they require any additional staking. The Umbrella Bamboo is a fast grower and you will usually find it in clumps that spread around four to five feet when it comes to width.

It thrives best in partial shade, as the direct sunlight is likely to affect the quality of the leaves. The plant thrives best in USDA hardiness zones five to nine and they require consistently moist soil throughout the growth period.

Belonging to the Neotropical genus, the Guadua is a but a type of thorny bamboo that is primarily found in Uruguay. Some species of the bamboo may also be found in Trinidad and parts of Northern Mexico. The biggest concentrations of these species, however, are found across the Amazon basin. The Guadua Bamboo primarily grows in regions with low altitudes, which is often fewer than 1,500 m. In some rare instances, they may grow in high altitudes of more than 2,500 m.

As with many forest-grown bamboos, the Guadua Bamboo plays a vital role in the diet of Atlantic and Amazonian rats. In America, this bamboo is also deemed highly important since it is one of the main raw materials for constructing houses in the coastal regions and Ecuadorian river-banks. As a building material, the Guadua Bamboo performs exceptionally well since it comes with multiple watershed protection attributes. In some instances, people also use it for its mechanical properties.

Unfortunately, with over-exploitation in place, the natural numbers of these bamboos have been significantly depleted. Since the Guadua plays a major role in depleting carbon-di-oxide from the air and serves the primary role of raw material, it is important to use this bamboo more sustainably.

While Guadua Bamboos aren’t one of the common choices for your home garden, you might as well grow them at home if your garden is spacious enough. Ideally, you should choose a sympodial bamboo rhizome for your home garden as they tend to grow in smaller clumps. In most cases, the initial seedlings of the Guadua bamboo mature after 5 years, and their height tends to stabilize after 9 years. So, if you can spare the time and space, you might as well want to consider growing this plant at home.

See also  Is Bamboo Recyclable? (And Ways to Dispose of?)

Being a cold specie, this bamboo can withstand extremely low temperatures. It also thrives well in complete or partial shade and boasts leaves shaped like that of the palm tree. Leaves usually grow up to 5 to 13 inches and have a beautiful yellowish-brown hue. Unlike many other species of bamboo, the Arrow bamboos can thrive in containers and withstand salty air.

The unique feature of the Japanese Cane bamboo lies in the fact that it is named after Japan even after being primarily cultivated in parts of China. This plant is known for its smooth canes and upon maturing, it emerges with a beautiful shade of dark green.

Hedges (Phyllostachys glauca)are beautiful evergreens that are known for their strikingly beautiful canes, most of which develop from the vibrant bluish-green culms. However, this bluish tinge is perhaps most pertinent in the younger plants because as the plants start aging, they lose this turquoise hue and the canes appear yellowish-green.

The canes of hedge bamboos are around two inches in their overall width, and they tend to grow upright. They prefer a warm climate as it promotes rapid growth. In case the temperature level drops, the growth will take an instant halt. While Hedge Bamboos aren’t invasive, they can steadily spread to create a tiny bamboo orchard measuring up to 20 feet in width.

Found in parts of East Asia, this plant is primarily native to japan and Chine, though you can find it in European and Korean regions and parts of New Zealand. The most striking aspect of these bamboos lies in their striped green leaves that look truly stunning in summer and spring months. Dwarf green stripes are known to be deciduous even during the winters.

That is why they are mowed to the ground during late summer and fall to maintain the charm and appeal. Dwarf greens are generally non-fussy bamboos and they can withstand extreme temperatures. So, if you are planning to get them at home, the temperature shouldn’t be a constraint.

The Green Glaucous bamboo (Phyllostachys viridiglaucescens) is known to grow super well and spread extensively for creating a grove. Thanks to the quality, they work really well as a living fence or a solid privacy screen. The Green Glaucous is best known for its canes that emerge with a deep emerald green hue. With time, they assume a lime green hue, finally maturing into yellowish-green. The canes of these bamboos are fully striped and white along with the nodes and their foliage is medium, elongated, and wide.

If you’re looking for ornamental bamboo, the Painted Bamboo is an excellent option. These trees are best known for their stripes along the culms and their golden canes with unique markings. Unlike other bamboos, the canes of the Painted Bamboo feature stunning patterns across every node.

See also  Can You Compost Chicken Bones? (And Are They Biodegradable?)

They usually assume a height of 40 to 60 feet, steadily arching with their foliage’s weight. The leaves are elongated and narrow, going up to 7 inches in length. Being non-invasive, these plants have an excellent root system, that further aids in controlling erosion.

Belonging to the family of Poaceae grass, this is yet another evergreen bamboo that is found in parts of South America. Unlike other species, Chilean bamboos can withstand frost and are widely planted in temperate areas. That is why, you will find them in bulk in parts of Argentina, Valdivia, and Chile.

In the wild, the Chilean bamboo is known to control several dynamics of the forests. For instance, it controls the growth of multiple trees so that they do not witness unnecessarily fast growth and end up perishing in the cold. They also feature hair lanceolate, a form of a leaf that comes with a spine along the end. The flowers from the Chilean bamboo are light brownish and the plant is known to bloom for until 60 years.

Moso bamboo (Phyllostachys edulis) is yet another elegant bamboo for your home garden. Growing up to 60 feet, these bamboos are known to be one of the hardiest and tallest bamboos across the globe. Their culms are extremely thick with a width going up to 8 inches. The canes that usually start as soft green before assuming a yellowish-green tinge, have a soft, velvety covering.

Mosos thrive best in warm and moist areas where they can aggressively thrive without being problematic. In the wild, you are likely to find Mosos in parts of China, Japan, and other East Asian regions.

Known Olive green upright canes, Black Bamboos (Phyllostachys nigra) are a beautiful addition to any home garden. These bamboos assume a marble brownish hue almost immediately until becoming fully black over the next couple of years. Each of these canes passes through phases of color development which further adds to their multi-colored hue. The canes are around two inches in width a perfectly smooth and slimy surface.

Well, now that you have a list to turn to, what are you waiting for? Explore these options and pick a bamboo plant that works just well for your home garden. Since most of their plants are easy to maintain, you certainly won’t encounter any issues while growing them at home!

Native to China, this plant is primarily harvested for timber and their canes are incredibly smooth and glossy. When young, the plants have an emerald green hue. They eventually fade to yellowish-green upon aging. The timber bamboo thrives in full sun and requires consistently moist soil. Ideal hardiness zones range from 5 to 9.