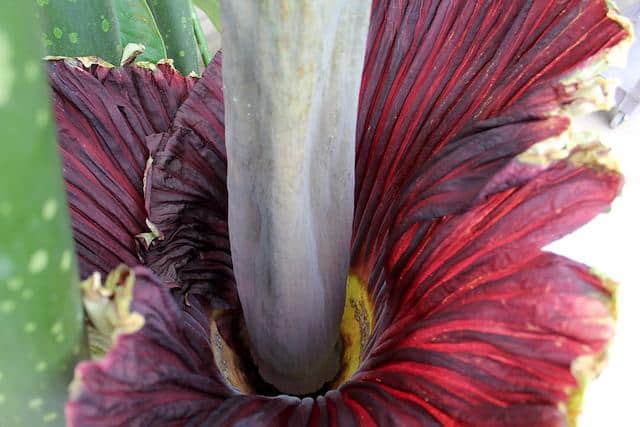 Our world truly is wonderful. There are fascinating things in nature and all around us that we are really not aware of. Many of them are really rare and go by unnoticeably as they get extinct faster than they are discovered. Just imagine the number of species that have existed on our platen and have disappeared during the course of history.

When it comes to flowers, there is a number of strains that are really rare and fascinating.  Unfortunately, they too are facing the problem of disappearing forever. An expert from Flower Shops from London says that the reason why certain flowers are disappearing is because of climate change, deforestation, urbanization, and many other man-caused problems.

Here is a list of rare flowers that are dangerously close to becoming extinct.

A type of plant which has a great decorative function, the Baseball Plant essentially looks like its name states – Like a baseball. The ball-shaped plant is actually accessible to people as it is still available in many flower shops here and there. However, that may no longer be the case.

The baseball plant is only native to one place in the world – The Great Karoo Region of South Africa. Sadly, due to the immense harvesting of collectors and exporters, this plant is dying out. If we are to save it we need to export this plant lesser.

Titan Arum is known as the world’s biggest flower. It is native to Sumatra and also has the largest inflorescence of all the flowers in the world. However, it too is losing its population and there are far fewer examples of this flower found in the wild.

The only places where this flower is being preserved are reservations and botanical gardens where you are able to see them up close. Fun fact, this flower is also known as the Corpse Flower, but it has nothing to do with the extinction rate. It is only due to its ghastly smell.

The Black-Bat flower is called that for a reason. It really looks like a small bat spreading its wings. The Tacca Chantrieri, as it is commonly called, is impressive and quite unique due to its black and velvety leaves.

Unfortunately, poachers have brought this flower to near nonexistence. There are not many of them left and chances are that it might completely disappear really soon.

The Ouachita Mountain Goldenrod is called that way because it is usually found on the crests of Ouachita Mountain. This type of flower commonly prefers a cool and moist climate and is also found alongside the borders of Arkansas and Oklahoma.

The Ouachita Mountain Goldenrod is so old that it is thought to be a remnant of the last Ice Age. Dubbed the Solidago Ouachitensis, their exact number is unknown today but not a lot of them are left.

Unfortunately, Howell’s Spectacular Thelypody only has five populations that remain on Earth. All of them are found in Northeast Oregon. The plant is also referred to as helypodium howellii ssp. Spectabilis.

In 1999, only 30 thousand of these plants have been confirmed to be remaining, However, the number is declining on a yearly basis. Their dwindling population is getting smaller due to unnecessary grass mowing in the areas where this flower resides.

The Georgia Aster flower is specifically native to the Southeastern part of the United States. This plant is also referred to as Symphyotrichum georgianum, as its specific botanical counterpart name.

Although still endangered there is some good news about this flower. According to the information given by certain conservation organizations this flower first grew in small clumps. Now there are 60 populations of this flower in natural habitat development. We are still not out of the woods yet as there is still a danger of this flower disappearing off the face of the earth.

The Rafflesia Flower, scientifically known as Rafflesia arnoldii, is also known as the Corpse Flower. It got its nickname due to its smell of decomposing flesh that surrounds it. However, it, by all means, should not be confused with Titan Arum that has similar characteristics and the same kind of smell to it.

Rafflesia is among the biggest flowers in the world and is characterized by its oversized petals that can grow to the size of a small chair. Due to the weight, it does not have structural steam nor roots.

Rafflesia is also known for being a parasitic flower and mostly appears in the forests of Borneo and Sumatra. The flower is extremely popular with collectors so poaching is one of the reasons for its decline in numbers. Additionally, lack of conservation and the destruction of their natural habitat is also a major cause of their decline in numbers.