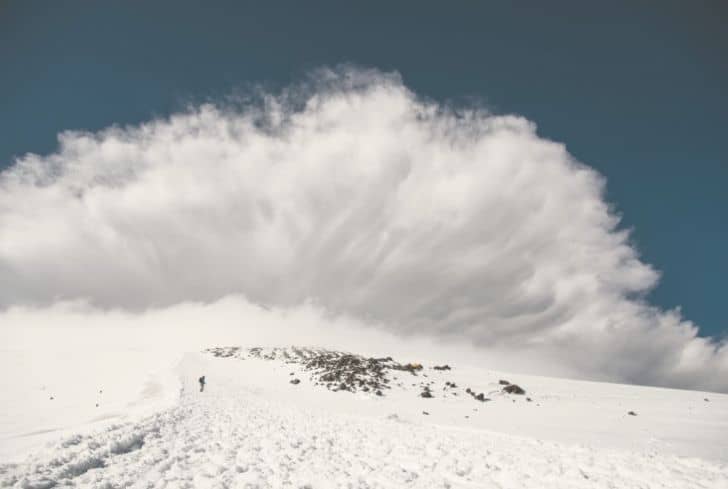 Spending winters in the mountains with nothing but white snow on all sides can be quite relaxing. For those wanting an adrenaline rush, the snow is a great place to go skiing, snowboarding, and even having snowball fights. However, being on the slopes means one has to constantly be alert if they don’t want to get caught in an avalanche. The rapid descent of snow may seem harmless, but it can cause a lot of damage to life and property. This is why a proper understanding of avalanches is necessary for those fond of spending their luxury time in the mountains.

On any slope, the snow is piled up and supported by a snowpack. It keeps the snow from tumbling down all the time. Avalanches occur when the snowpack starts to weaken and allows the buildup of snow to be released. Small avalanches are generally made up of ice, snow and air. The larger ones comprise of rocks, trees, debris and even mud that is resting on the lower slopes.

Contrary to belief, these snow slides are not random events that occur without any warning signs. Winter season is when they are most common, often brought on after a large storm in the area. Rainfall and sleet also tend to be responsible for avalanches in the summer and monsoon season.

To help in the understanding of avalanches, they have been classified into four types.

First of these are the Loose Snow Avalanches. They are common on steep slopes and are seen after a fresh snowfall. Since the snow does not have time to settle down fully or has been made loose by sunlight, the snowpack is not very solid. Such avalanches have a single point of origin, from where they widen as they travel down the slope.

Loose Snow Avalanches, in turn, could cause a Slab Avalanche, which is characterized by the fall of a large block of ice down the slopes. Thin slabs cause fairly small amounts of damage, while the thick ones are responsible for many fatalities.

Powder Snow Avalanches are a mix of the other forms, Loose Snow and Slab. The bottom half of this avalanche consists of a slab or a dense concentration of snow, ice and air. Above this is a cloud of powdered snow, which can snowball into a larger avalanche as it progresses down the slope. The speed attained by this avalanche can cross 190 miles per hour, and they can cross large distances.

Finally, there are Wet Snow Avalanches. These are quite dangerous as they travel slowly due to friction, which collects debris from the path fairly easily. The avalanche comprises of water and snow at the beginning, but an understanding of avalanches has shown us that it can pick up speed with ease.

When glaciers flow over a cliff, they form the ice equivalent of a waterfall or an icefall. Falling blocks of ice create an avalanche of ice, which often entrains snow below it or triggers slabs. Especially in big mountains, icefall avalanches can be large and travel long distances. Despite this, icefall avalanches kill few people compared to dry slabs that people trigger themselves.

Most of the deaths from icefall avalanches occur to climbers in big mountains who just happen to be in the wrong place at the wrong time.

Cornices are the fatal attraction of the mountains; their beauty is matched only by their danger. Cornices are elegant, cantilevered snow structures formed by wind drifting snow onto the downwind side of an obstacle such as a ridgeline.

Similar to icefall avalanches, the weight of a falling cornice often triggers an avalanche on the slope below, or the cornice breaks into hundreds of pieces and forms its own avalanche—or both. Be aware that cornice fragments often “fan out” as they travel downhill, traveling more than 30 degrees off of the fall line.

Cornices tend to become unstable during storms, especially with the wind, or during times of rapid warming or prolonged melting. Each time the wind blows, it extends the cornice outward, thus, the fresh, tender and easily-triggered part of the cornice usually rests precariously near the edge while the hard, more stable section usually forms the root.

Glide occurs when the entire snowpack slowly slides as a unit on the ground, similar to a glacier. Don’t mistake glide for the catastrophic release of a slab avalanche that breaks to the ground. Glide is a slow process that usually occurs over several days. Glide occurs because meltwater lubricates the ground and allows the overlying snowpack to slowly “glide” downhill.

Usually, they don’t ever produce an avalanche, but occasionally they release catastrophically as a glide avalanche. So the presence of glide cracks in the snow does not necessarily mean danger.

Slush avalanches usually occur in very northern latitudes such as the Brooks Range of Alaska or in northern Norway. They are unusual because they occur on very gentle slopes compared with other avalanches, typically 5-20 degrees, and they rarely occur on slopes steeper than 25 degrees.

A typical slush avalanche occurs in impermeable permafrost soil, which allows water to pool up, and occurs during rapid saturation of a thin, weak snowpack. When water saturates the snowpack, it catastrophically loses its strength and the resulting slush often runs long distances on very gentle terrain.

There is no one reason behind the development of avalanches. It was believed for long that the echo of a human voice in the mountains could dislodge enough snow to start one. Similarly, a person’s weight can cause an avalanche too. The sudden addition of weight can fracture a weak area of snow. However, scientific understanding of avalanches shows us that there are many environmental factors at work.

Heavy snowstorms are more likely to cause Avalanches. The 24 hours after a storm are considered to be the most critical. Wind normally blows from one side of the slope of the mountain to another side. While blowing up, it will scour snow off the surface, which can overhang a mountain.

Heavy snowfall is the first since it deposits snow in unstable areas and puts pressure on the snowpack. Precipitation during the summer months is the leading cause of wet snow avalanches.

Humans have contributed to the start of many avalanches in recent years. Winter sports that require steep slopes often put pressure on the snowpack, which it cannot deal with. Combined with the heavy deforestation and soil erosion in mountain regions, it gives the snow little stability in the winter months.

These include earthquakes and tremors since they can often create cracks in the snowpack. New snow or rain can cause built-up snow to loosen and fall down the side of a mountain. Sometimes the movement of animals has also been known to cause avalanches.

The use of All Terrain Vehicles and Snowmobiles creates vibrations within the snow that it cannot withstand. Coupled with the gravitational pull, it is one of the quickest ways to cause an avalanche. The other artificial triggers are off-piste skiers, gunshots and construction work done with explosives, which tend to weaken the entire surrounding area.

There are conditions where snow is already in the mountains and has turned into ice. Then, fresh snow falls on top, which can easily slide down.

Layers of snow build-up and slide down the mountain at a faster rate as steep slopes can increase the speed of snow. A rock or piece of huge ice can shake the snow and cause it to come down.

Warm temperatures that can last several hours a day can weaken some of the upper layers of snow and cause it to slide down.

As such, there is little damage to the overall ecological system due to avalanches. They are a part of nature and have been happening for thousands of years. However, they are a major natural hazard for the local human population.

1. Damage to Life and Property

A large number of casualties take place after avalanches hit heavily populated areas. Infrastructure is damaged, and the blockage caused impacts the livelihood of many. People who enjoy skiing, snowboarding and snowmobiling are at a greater risk of losing their lives. A powerful avalanche can even destroy buildings, and power supplies can be cut off.

The biggest way in which avalanches affect people is by causing death or injury. The force from an avalanche can easily break and crush bones, causing serious injury. Asphyxiation is the most common cause of death, followed by death from injury and lastly, by hypothermia—people buried in the avalanche if found within 15 minutes have more than a 90 percent survival rate. The rate drops to around 30 percent if found after 35 minutes.

When an avalanche occurs, it brings down all the debris with it and can cause havoc in low lying areas. Flash floods are seen to happen after avalanches, which is a long term problem many villagers and townspeople have to deal with. They can also change weather patterns and cause crop failure in farms present in the lower fields.

Avalanches can completely destroy whatever is on its pathways such as houses, cabins and shacks. This force can also cause major damage to ski resorts as well as ski lift towers near or on the mountain. Avalanches also can cause roads and railroad lines to close. A large amount of snow can cover entire mountain passes and travel routes with cars and trains traveling on these routes.

Avalanches can affect humans by damaging utilities and communication. The power from these snow waves can completely destroy pipelines carrying gas or oil, thus causing leaks and spillage. Broken power lines can cause a disruption in electricity and cause thousands of people to go without power. Communication fields, such as telephone and cable lines, could go silent, causing a panic and a delay in response time and rescue.

An avalanche can block anything in its path and even restrict the normal movement of traffic. Various ski resorts depend on tourists to run their business successfully. Ski resorts and other businesses are forced to close until the avalanche decreases, and weather conditions become suitable.

If the snow from an avalanche accumulates on farmland located at the lower altitudes, it can completely destroy the crop, causing crop failure and heavy economic losses for the farm.

What to Do if Caught in an Avalanche?

In the case of deadly avalanches, the moving snow can quickly reach over 80 miles per hour. Skiers caught in such avalanches can be buried under dozens of feet of snow. While it’s possible to dig out of such avalanches, not all are able to escape.

When someone gets tossed about by an avalanche and buried under many feet of snow, he hardly has a true sense of which way is up and which way is down. Some avalanche victims have tried to dig their way out, only to find that they were upside down and digging themselves farther under the snow rather than to the top!

As per the experts, people caught in an avalanche should try to “swim” to the top of the moving snow to stay close to the surface. Once the avalanche stops, do your best to dig around you to create a space for air, so you can breathe easier. Then, try to figure out which way is up and dig in that direction to reach the surface and signal rescuers.