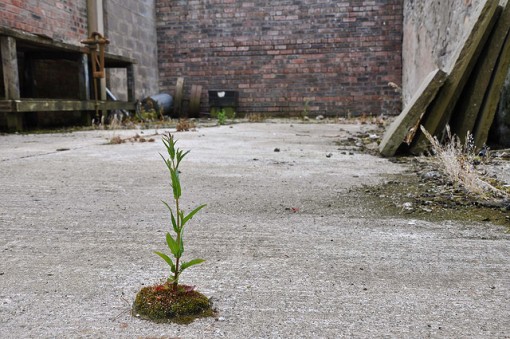 Ecological succession is the term used to describe what happens to an ecological community over time. It refers to more or less predictable and orderly set of changes that happen in the composition or structure of ecological community. When you are born, your learn to crawl, then walk and then run. When you grow old, your body goes through certain predictable changes over a period of time as in your body grows taller, your hair grows longer, your mind and body develops. Similarly, when you plant a tree, it grows slowly and then grows bigger and bigger and bigger. Basically, its a predictable set of changes that are visible over a period of time. The time scale can be decades or even millions of years.

It is different from Ecological Evolution because the changes that occur aren’t evolutionary in nature, but they may be adaptive. It is based on the principle and knowledge that nothing in life ever remains the same, but that all habitats are in a process of constant change as a result of the inter-dependencies and reactions within the ecological system itself.

Succession may be initiated either by formation of new habitat (landslide or lava flow) or disturbance of already existing habitat (fires, land clearance). There are three recognized stages to ecological succession. Each covers a gradual process of change and development. They do not have hard and defined boundaries, and it is possibly for an ecological system to be in both stages at once during the transition period from one to another. The 3 stages of ecological succession are:

1. Primary – This is when an ecological community first enters into a new form of habitat that it has not been present in before. A good example of this would be the habitat created when granite is removed in a quarry. The rock face that is left behind is altered and becomes a new habitat. The environment that then grows within that habitat is considered to be in its primary stage.

2. Secondary – The secondary succession stage occurs after a habitat has been established, but it is then disturbed or changed in some fashion and a new community moves in. To use the example from before – let us say that a primary stage develops on the face of a newly quarried granite cliff. That habitat grows undisturbed, until there is a forest fire that then burns and changes a portion of the habitat that has been growing on the rock face. That ecological habitat has now entered its secondary stage.

Pioneer species are the ones that thrive the new habitat at the beginning of ecological succession. Pioneer species are ‘r-selected’ species that are fast growing and well-dispersed. Early succession is therefore dominated by so called ‘r-selected’ species. As succession continues, more species enter the community and begin to alter the environment. These are called ‘k-selected’ species. They are more competitive and fight for resource and space. The species that are better suited for the modified habitat then begin to succeed the other species. These are superseded by newer set of species. This goes on till the stage of climax or equilibrium is achieved.

When succession reaches a climax, where community is dominated by stable and small number of prominent species and no other species can be admitted, that is called the  state of equilibrium or the climax community.

The climax stage of ecological succession is defined by the energy balance that is achieved. This means that within this very stable ecological system, there is a balance between the life that is produced, and the life that is consumed. For example, there are enough animals to eat the extra seeds to prevent overgrowth that could choke out plants, but not enough to prevent some of the seeds from growing and continuing their cycle of life. The climax stage is stable, but not static. During the other stages, the balance of energy is not in place and there may be crises that develop as a result which will prolong the secondary stage.

How Long Does Each Stage of Ecological Succession Take?

Each stage of ecological succession can take 100s to 1,000s of years – if not more. That is true, but only in a forensic sense. The assumption of ecological succession is that it is a forward moving, and linear path. As more of humankind encroaches on the natural world, the linear progression of this methodology is changing itself. That someone seems fitting for a theory that talks about the inevitability of change.

How is Mankind Changing Ecological Succession?

To best illustrate this, let us return to our first example – the rock face. Let us suppose that the granite wall was quarried by man, and then abandoned once they had what they needed. This allows for a primary stage to begin. Left alone by man, it could quickly pass into a secondary stage within a hundred years or so. Another few centuries after that, the old quarry is slowly entering its stable climax stage – except – now man has returned to build a road. One thing that ecological succession recognizes is the death of an ecosystem. That is what occurs when a climax stage ecosystem like the rain forest is destroyed by logging. Yet when a climax stage ecosystem is only interrupted, it is not yet understood whether it returns to the secondary stage, or would still be considered at its climax of ecological succession.