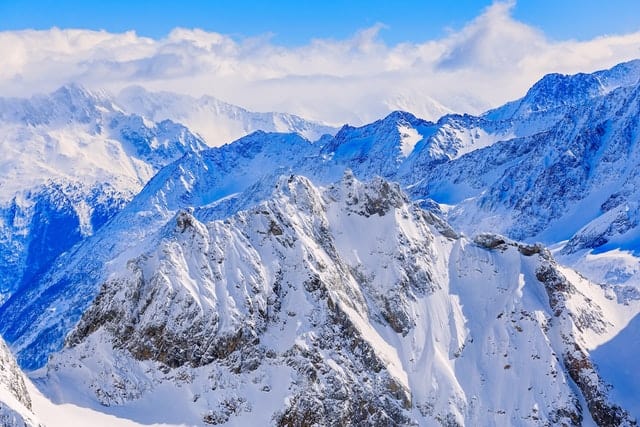 Alp’s two-thirds of glacier ice will melt by 2100 due to high temperatures resulting from climate change, found by a study. Glaciers in the European Alps significantly contribute to the hydrological cycle and serve as a source for hydroelectricity. They also have substantial touristic importance.

The research shows that half of the ice in the 4,000 glaciers of the mountain chain will disappear by 2050 because of global warming occurred by past emissions. Although the carbon emissions plummeted to zero, it cannot stop two-thirds of the ice from melting by 2100.

For the continuous rise in the emissions at the present rate, ice tongues could even disappear from valleys of Alpine of Europe by the century end. The retreat of glaciers in the European Alps will have a huge impact as they play a vital role in river runoff. According to the researchers, the availability of water for hydroelectricity and farming especially during droughts will be profoundly affected due to the loss of the glaciers impacting both nature and tourism considerably.

said Daniel Farinotti, a glaciologist at ETH Zurich in Switzerland and one of the research teams.

“In the pessimistic case, the Alps will be mostly ice-free by 2100, with only isolated ice patches remaining at high elevation, representing 5% or less of the present-day ice volume,” said Matthias Huss, a senior researcher at ETH Zurich.

One-third of the massive ice fields in towering mountain chains of Asia were also doomed to melt as per a study in February. The reason is climate change, and the consequences will be severe for around 2 billion people downstream. The drastic climate change consequences even won’t save the glaciers from endangering these people.

“This is the climate crisis you haven’t heard of,” said Philippus Wester of the International Centre for Integrated Mountain Development (ICIMOD). “In the best of possible worlds, if we get really ambitious [in tackling climate change], even then we will lose one-third of the glaciers and be in trouble. That for us was the shocking finding.”

If global carbon emissions are not checked, it’s even hard to prevent two-thirds of ice Glaciers along the higher and colder altitudes of the Himalayan and Hindu Kush range from melting by 2100.

In case carbon emissions are dramatically reduced, and we are successful in limiting global warming to 1.5C, 36% of the glaciers along the Hindu Kush and Himalaya range will melt by 2100. If emissions not cut from the current rate, the loss soars to two-thirds as per the report.

The rising sea levels result from melting glaciers and ice-caps, but Greenland and Antarctica are the sources of three-quarters of this water. The Hindu Kush Himalayas, Iceland, and Patagonia also play a significant role. The European Alps contribute less than 1% running through France, Switzerland, Italy, Austria, and Germany.

Various complex models have been used to understand how European Alp’s glaciers will react to changing climatic conditions of the 21st century. The latest research published in the journal The Cryosphere and presented at the European Geosciences Union conference in Vienna, Austria, on Tuesday, combined the computer models with real-world data taking 2017 as its starting point to predict the fate of the glaciers.

The models explicitly discussed on the movement of the glaciers down the mountains unlike the work done before, leading to lower projected ice losses in comparison with earlier research. The researchers said that the application of this approach to other glaciated mountain chains could improve the forecasts on their ice loss.

The melting of ice can be minimized only by cutting some of the major factors like reducing the emissions from burning of fossil-fuel, other polluting activities, and deforestation. Farinotti said: “The future of these glaciers is indeed at risk, but there is still a possibility to limit their future losses.”