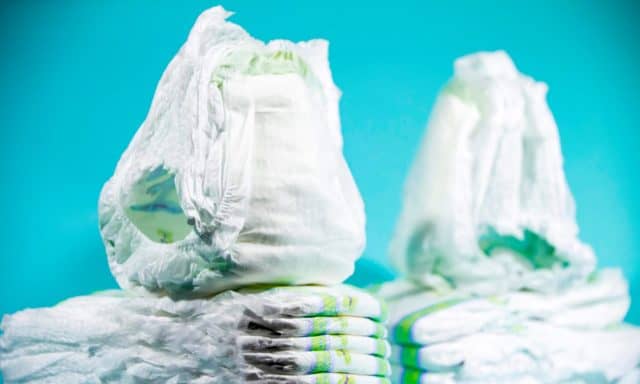 Parents always want comfort for their babies, but definitely not at the cost of their soft, sensitive skin getting in contact with banned substances and probable carcinogens!

According to a new study published on Wednesday, some harmful substances found in diapers, including the weedkiller glyphosate, classified by the World Health Organization as a probable carcinogen and other banned chemicals. Even the brands that claim to be eco-friendly contained potentially dangerous additives. In France, it is now a concern for parents that disposable diapers are harming their babies.

Anses, a French agency in charge of food, environmental, and occupation health and safety conducted the study. After examining 23 diaper brands between 2016 and 2018, it determined that “a number of hazardous chemicals in disposable nappies that could migrate through urine, for example, and enter into prolonged contact with babies’ skin” as reported in The Guardian. It said some were added intentionally, notably perfumes. The nappies marketed as “ecological” also contain certain substances thought to pose a risk.

More than 60 chemicals including some banned in Europe for over 15 years found in the diapers by the researchers. “Other substances, usually found in cigarette smoke or diesel fumes, were also discovered.”

The brands are all well-known though the report didn’t name the specific brand. The French Ministry of Health has given 15 days to diaper manufacturers to get rid of these chemicals.

Pampers and Joone, two major manufacturers, reacted to the Anses report on Wednesday. Pampers claimed “Our nappies are safe and always have been,” and added they had “already put into place the report’s recommendations.” They also explained: “Our products do not contain any of the allergens listed by the European Union.”

Carole Juge-Llewellyn, the president of Joone, another manufacturer, called the report “alarmist” and said the company had published toxicology analysis for its products.

Agnès Buzyn, the Health Secretary, assured French parents of no immediate health risk to babies wearing disposable diapers, but also not to ignore the concerns. She also interestingly added: “Obviously we should keep on putting our babies in nappies. We’ve been doing it for at least 50 years.”

What Buzyn meant was that parents are using disposable diapers for their babies for much longer than 50 years, but it’s just that previously they used to be cloth. Thus, it is crucial for parents to note that had they been willing to use cloth diapers, they could avoid a lot of the chemical concerns related to disposables.

However, Buzyn admitted that the report could not rule out “a risk for children’s health in the long term,” adding: “This is why, as a matter of precaution, we want to better protect our children from possible risks.”

Of course, it depends on parents whether they should opt for going back and get stick to the earlier methods though with some discomforts or they’re still willing to moving forward to technological advancement giving more comfort to their babies. However, whatever may be the choice, baby’s health comes first.

The study findings are not new and may not appear shocking for those who have researched diapers earlier as they must have heard that disposable diapers have had connections with allergic skin reactions. Extended use of diapers even overheats baby boys’ testicles resulting in low sperm count. It also creates difficulties with potty-training as kids can’t easily feel when they’re wet.

We should understand that disposable diapers are one-quarter plastic, and it’s not desirable to have that substance remain in contact of bare skin for extended periods, especially those as sensitive as baby skin. Besides, dumping loads of plastic into the landfill along with untreated feces certainly not going to do any good for us, either.

We can eliminate all of these issues by choosing cloth. Although it has its environmental footprint especially considering the fabric used in a diaper and the usage of water for washing, it still fits appropriately into the circular lifestyle we are craving to achieve.

The report recommended the elimination or minimizing the use of named substances in disposable nappies, further research, and more regulation to cover the products. Anses said: “It is not possible to exclude a health risk related to the wearing of disposable nappies.”

The report concluded: “There is no epidemiological research allowing us to prove the health effects linked to the wearing of nappies. That said, dangerous chemical substances have been found in the nappies … there is evidence the safety thresholds for several substances have been crossed. At the current time and from what we know at the moment, it is not possible to exclude a health risk linked to the wearing of disposable nappies.”

Indeed, it is high time that parents should look for alternatives.