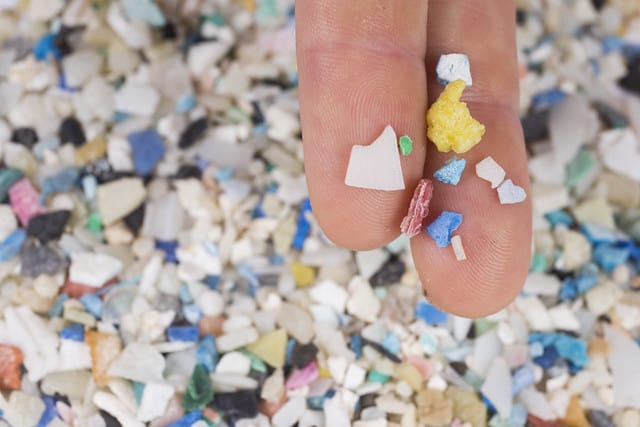 Human ingestion of plastic pollution – the first study of its kind estimates that an average person consumes at least 50,000 particles of microplastic in a year and breathes in almost the same quantity.

The exact number, however, is probably many times higher, as the number of foods and drinks analyzed for plastic contamination is minimal. The scientists reported that the particles consumed increased drastically by drinking a lot of bottled water.

The impacts of ingesting microplastic on health are unknown, but toxic substances could release from them. Some pieces are so small that they even penetrate human tissues, triggering the immune reactions.

The disintegration of plastic litter is now present everywhere across the planet, causing microplastic pollution. Researchers find microplastics wherever they look; in soil, the air, rivers, and not to mention the deepest oceans around the world.

Microplastic also got detected in tap and bottled water, beer, and seafood. When it was found in human stool samples in October for the first time, it confirmed the ingestion of the particles by humans.

The new research, published in the journal Environmental Science and Technology, was based on the data in 26 previous studies measuring the amounts of microplastic particles in water, fish, shellfish, salt, sugar, beer, and also in the air in cities.

The scientists then followed US government dietary guidelines to calculate the number of particles people would eat in a year. As per their estimation, adults eat about 50,000 microplastic particles and children about 40,000 a year.

As most food and drink types have not yet tested, it means the study assessed calorie intake of only 15%. “We don’t know a huge amount. There are some major data gaps that need to get filled,” said Kieran Cox, at the University of Victoria in Canada, who led the research.

Foods, including meat, bread, dairy, processed products, and vegetables, may also contain as much plastic, he said. “It is really highly likely there is going to be large amounts of plastic particles in these. You could be heading into the hundreds of thousands.”

The few best available data is on water. On average, bottled water contains 22 times more microplastic compared to the tap water. Therefore, a person consuming only bottled water would also consume 130,000 particles per year alone from that source compared to 4,000 from tap water, the researchers said.

Scientists are not clear about the impacts of microplastics inhaled, but as the new study speculates, “most inhaled particles will be ingested” rather than coughed or sneezed out. The researchers estimated that microplastic particles found in a single meal per day could add tens of thousands more to the annual amount consumed.

Cox was clear that health effects are not known as yet, but according to him, the ingested particles are “a high exposure risk in terms of numbers. It could be a potential alarm call for sure”.

Stephanie Wright, at King’s College London and not involved in the research, said: “These current estimates suggest microplastic exposure is relatively low compared to other particles. For example, it has been estimated that the average western diet exposes consumers to billions of titanium dioxide microparticles, a common additive, each day. However, what comparatively low microplastic exposures mean for health is unknown.”

The chief scientific advisers of the European Commission said in a report in April: “The evidence [on the environmental and health risks of microplastics] provides grounds for genuine concern and for precaution to be exercised.”

They concluded: “Growing scientific evidence on the hazards of uncontrolled microplastic pollution, combined with its long-term persistence and irreversibility, suggests that reasonable and proportional measures should be taken to prevent the release of microplastics.”

Cox said even his behavior had changed because of his research. “I definitely steer away from plastic packaging and try to avoid bottled water as much as possible,” he added.

“Removing single-use plastic from your life and supporting companies that are moving away from plastic packaging is going to have a non-trivial impact,” Cox explained. “The facts are simple. We are producing a lot of plastic and it is ending up in the ecosystems, which we are a part of.”