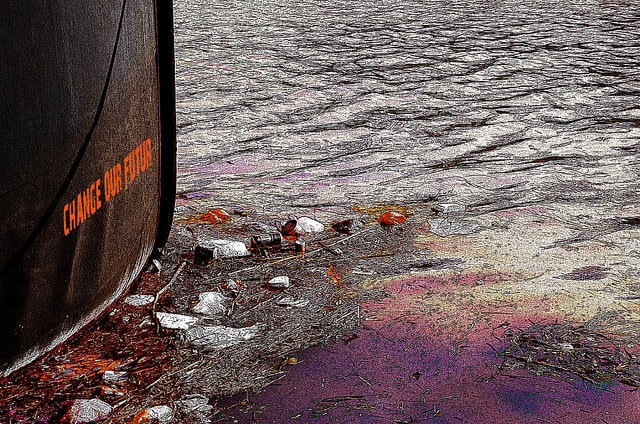 Road runoff pollution is damaging rivers in the most congested areas of London with the toxic effects on water, a study finds. London’s mayor Sadiq Khan calls for government action to protect the capital’s waterways by providing more funds for cleaning up the rivers.

The worst affected rivers by pollution from roads are the River Lea in the east at 42 miles and River Brent in west London at 18 miles, respectively. The focus is on toxic air that is killing and shortening the lives of tens of thousands of people each year. However, road pollution is also damaging the water supply.

The spills of oil, diesel, and petrol, and worn out tires and braking systems, that are left as residues on roads and washed off the streets by rain, flushed into waterways causing road runoff pollution in rivers and canals. Out of the dozens of rivers in London, to which road runoff pollution is one of the most significant sources of damage, only the Carshalton Arm, the source of the River Wandle, is marked as “good” under the EU standards.

The new research published on Monday maps some of the biggest sources of road runoff pollution in the capital for the first time. These include the North Circular Road at Alperton and Chingford in the east, a slip road to the A40 at Ealing in west London, and Jenkins Lane in Beckton in east London.

The sources of pollution are under the oversight of various government agencies and departments. These include the Department for Environment, the Environment Agency, the Highways Agency, the Department for Transport, and Food and Rural Affairs (Defra) as well as local authorities, and most of these have faced severe budget cuts in the last decade. It is one of the problems with the prevention of road runoff.

Khan, the Labour mayor, said: “The government must step up to provide the Environment Agency and highways authorities with the appropriate funding for measures to properly protect the capital’s rivers.”

Road runoff contains hundreds of pollutants, including heavy metals, regularly that can kill fish or other aquatic life. These not only cause long-term damage to rivers and potentially harmful to human health, but also can affect drinking water sources. In case pollutants exist in sources, those must be extensively tested and expensively cleaned up.

However, some of the road runoff pollutions can be prevented from reaching the waterways by improving the drainage system and providing natural barriers and filters in the first place before adopting any water treatment. Plantation of suitable vegetation near waterways helps filter out some of the pollutions, and can also create or expand natural wetlands. These can facilitate not only in clearing air pollution from road traffic but also provide homes for wildlife.

John Bryden, the head of improving rivers at Thames21, one of the groups behind the new research and maps, said: “Pollution from roads is one of the least understood and most complex forms of river pollution. This research can finally help us identify the worst roads and start taking action to deal with this urgent problem.”

Some of the worst sources of road runoff will be reduced by moving to electric vehicles, but toxins from tire wear and braking systems will still be a problem. More and better public transport and if people are encouraged to walk and cycle more can play a crucial role in cutting traffic.

The head of UK programs at the Wildfowl and Wetlands Trust charity, which manages some of London’s remaining wetland areas, Rob Shore, said this is not the problem of London only.

“It is clear that road runoff is a major source of river pollution across the UK, especially in our urban areas, killing aquatic life and making our towns and cities less hospitable for people,” he said. “Wetlands and sustainable drainage systems [are] a key part of the solution. Creating new urban wetlands will capture runoff before it gets into our rivers while providing a range of other benefits, such as flood alleviation, wildlife habitat and improvements to air quality.”

A Defra spokesperson said: “Improving our environment takes time, money and the combined effort of government, industry, businesses and civil society. We actively support this, bringing organisations together to tackle difficult issues like road runoff.”