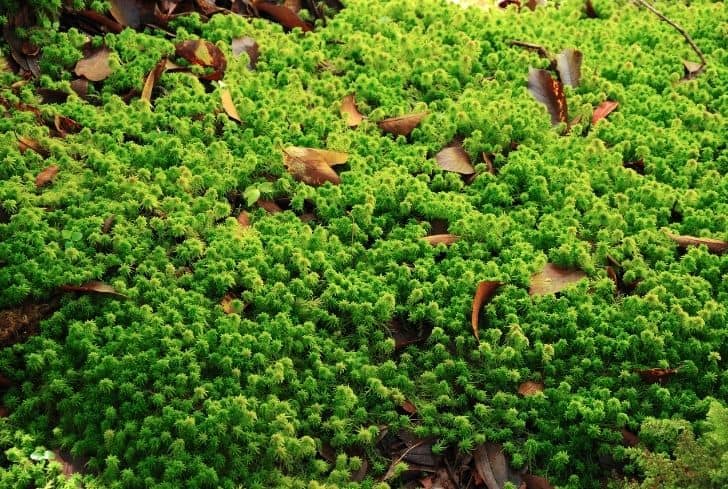 Almost all home gardeners have worked with Sphagnum moss in its varied forms. This is especially common in the Spring months when the moss is bought by thousands of gardeners who use it while planting new seeds in their garden. Lightweight and yet extremely affordable, Sphagnum is indeed one of the best soil amendments there is. But what exactly is this moss and how to grow it at home? Also, are there multiple species of Sphagnum moss? Let us find out!

What is Sphagnum Moss?

Interchangeably known as the Peat Moss, Sphagnum Moss is usually made from a varied genus comprising of almost 400 different types of mosses. Both the living and dead variants of this moss can retain massive amounts of water. That is also the reason you will find it growing primarily along bogs, river areas, and swampy lands.

Thanks to its unique ability to change landscape according to the habitat, the Sphagnum moss is popular as a habitat manipulator. The most common varieties of this moss are known for holding up to 26 times its entire weight in liquid. So, if even if grows in a dry area, it will soon end up creating a swamp or marsh.

In nature, you will find this moss growing in a close-knit cluster of branches around one primary stem. The branches spread quite easily, and, in some instances, they may even take a hanging appearance. This moss also has stems of varied sizes containing living and dead cells with water retention capacities.

The easiest way to spot this moss is by identifying its bright, greenish hue, though some species of the moss may be orangish, reddish, or even pale yellow. Sphagnum moss won’t assume an impressive height and, in most scenarios, it is only two to three inches.

How to Grow Sphagnum Moss?

Sphagnum Moss can be grown both outdoors and indoors and growing it is fairly simple. Almost all popular variants of this moss can grow up to .74 to .75 inches annually and it thrives best in temperatures ranging from 59 to 70 degrees. While the exact origin of this moss is still unknown, many believe it to have evolved from the North American forests. In case you are planning to grow the moss at home, here are the guidelines you need to follow.

See also  Can You Compost Garlic? (And Garlic Skin and Bread?)

Follow the below steps to grow Sphagnum moss indoors:

Growing Sphagnum moss outdoors is equally simple as growing it indoors. Here’s what you need to do:

As with any other species, Sphagnum Moss can be classified into several sub-species. In this article, we will shed light on four primary types of this moss.

This is the kind of Sphagnum Moss that features a reddish or orangish hue. Featuring thin branches and growing upright, you will usually find this kind of moss right above the water of swampy pr boggy lands.

Known for its bright greenish hue, the Cuspidata comes with hanging stems of uniform length. The branches of this moss are likely to grow back when they are fully dried out.

See also  Can You Compost Mussel Shells? (And Are They Biodegradable?)

Featuring greenish leaves and reddish branches, this is probably the most common variant of Sphagnum moss. It is also the largest type of moss among the ones listed here and is best known for its massive hummocks.

This is a type of Sphagnum that comes with a round, almost swollen branches that often take a curved structure. While the majority of subsecundra is available in different shades of copper, you also find them with greenish, reddish, and yellowish hues. Subsecundra is widely found across bogs and marshes.

One of the defining qualities of Sphagnum moss lies in its water retention abilities. Unlike any other moss species, Sphagnum can retain water just like your sponge. Gardeners can squeeze the water and use the moss again and again.

The most common use of Sphagnum moss is in creating a tinder (a type of fuel). Since the dry moss can quickly catch fire, it makes an excellent material for Tinder. However, since the role of the moss isn’t just limited to its tinder-making properties, here are some other uses you should know of.

How Long Does Sphagnum Moss Last?

Well, sphagnum moss can last forever. This moss is harvested for years and there has been no sound evidence when it comes to the expiration of the moss. You can use both sphagnum and peat moss for several years without having to worry about the expiration date.

Usually, we consider a product expired when it starts exhibiting traits indicating that it is not performing the role it is meant for. For sphagnum moss, this is water retention and there has been no specific indicator stating moss’ inability to retain water over time. In the simplest terms, it is good as new, and you can potentially use the moss forever.

Are Sphagnum Moss and Peat Moss the same?

Both Sphagnum and Peat Moss are known to be derived from the same plant. While you will find more than 300 species of this moss, most of their variants harvested for Sphagnum are found growing wetlands, usually along the Northern Hemisphere. Commercial grade sphagnum moss or peat moss is found in the bogs of Peru and some parts of New Zealand.

According to experts, Peat moss is the dead parts of Sphagnum moss that are usually found settling right below the Sphagnum bogs. Several bogs that are commercially harvested to create commercial grade peat moss are evolved from these bogs for several thousand years. Being completely natural, the dead part popular as peat moss is not essentially sphagnum moss. Unlike the latter, peat moss contains organic elements from insects, several kinds of animals, and plants.

In a way, sphagnum and peat moss are the same barring some differences in their organic structure. While sphagnum is referred to as the living part right above the bog. Unlike peat, moss sphagnum is harvested when alive.

While sphagnum moss is typically not dangerous, certain fungal infections have been associated with it. One common ailment is Sporotrichosis which occurs due to a fungus growing along with sphagnum moss.

The fungus will enter through your broken skin eventually causing irritation and small bumps. Over time, it can also cause skin ulcers or affect other parts of your body. While not all patches of sphagnum moss are infected, you should always wear protective gear (like masks and gloves) while working with the plant.

Well, now that you have a clear insight into growing Sphagnum moss at home, explore its varied types and grow the one, that works best for your home garden! Follow our Sphagnum moss growing guidelines and periodically spray your moss with rainwater for faster growth. Since we have specified the guidelines for growing the plant both indoors and outdoors, you will practically encounter no difficulty regardless of where you choose to grow it.