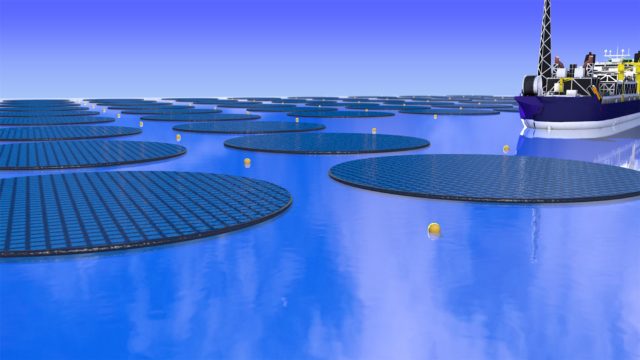 According to scientists, the “solar methanol islands” – the giant floating islands in millions in the ocean that are capable of converting atmospheric carbon dioxide into methanol could curb the burning of fossil fuels and help protect our climate. If enough of these proposed islands were built, they would be clustered together to create large-scale facilities to offset the total global emissions of greenhouse gases from fossil fuels.

In a paper published in PNAS, a team of researchers from Norway and Switzerland has proposed for ‘Solar Methanol Islands.’ The article argues that much of the technology required already exists to build these facilities and building them on a large scale in ocean regions where they would be safe from large waves and extreme weather, the need for fossil fuels could be drastically reduced, thereby restricting the global warming to an extent in the future.

“Humankind must cease CO2 emissions from fossil fuel burning if dangerous climate change is to be avoided,”

they wrote. “However, liquid carbon-based energy carriers are often without practical alternatives for vital mobility applications. The recycling of atmospheric CO2 into synthetic fuels, using renewable energy, offers an energy concept with no net CO2 emission.”

Andreas Borgschulte, the study author, told Newsweek that making renewable energy competitive with fossil fuels on a large scale is one of the main problems. In the efforts to make renewables a realistic option, several concepts have been tested, but yet to find a way to fruition. He said the Norwegian researchers came up with the idea for the solar islands when the government asked them to push fish farms out to open sea. However, energy is needed for these grids to function. “Energy ‘producing’ islands had been proposed some time ago,” he said. “What remained was to include energy storage.”

“This is just one of the many things we should be doing to control climate change, along with having better insulation in our homes, having higher efficiency in car engines and driving electric vehicles,” said Bruce Patterson, a physicist at the University of Zurich and co-author of a paper about the research published in journal Proceedings of the National Academy of Sciences on 3rd June. “This is just one piece of a mosaic.”

Patterson envisions that a single floating solar farm of the sort could produce 15,000 tons and more methanol a year which is enough to fuel a Boeing 737 airliner on 300 round-trip flights and more between New York City and Phoenix. “We’d mostly want to use the fuel in airplanes, long-haul trucks, ships, and non-electrified railroad systems,” he added.

In the paper, as per the researchers, floating islands would be similar to large-scale floating fish farms. The photovoltaic cells would be used for converting the solar energy into electricity, which in turn would help split water molecules into hydrogen and extract CO2 from seawater. Then these produced gasses would be reacted to generate methanol reusable as a fuel, “which is conveniently shipped to the end consumer,” they wrote.

The floating solar farms as per the team would consist of clusters of about 70 circular artificial solar panel islands covering an area of around one square kilometer (0.4 square miles). The areas with ample sunlight, moderate wave action of fewer than seven meters of wave height, shallow water with less than 600 meters water depth that the farms remain tethered to the ocean floor, and a low probability for hurricanes and severe weather are suitable to place these facilities keeping them appropriately secured. The appropriate locations for facilities were found across the globe including the Persian Gulf, the Red Sea, off the coasts of South America, Australia, Spain and parts of Southeast Asia.

As per the estimation of the team, the output from 3.2 million floating islands would exceed the total emissions from fossil fuels globally.

The team acknowledges the proposal as “ambitious,” and the production is also not even close. Currently, scientists are working on developing prototypes of the floating islands.

“[The] biggest challenge is the development of a large scale device to extract CO2 from seawater,” Borgschulte said. “This process is the only one of the total system [that] has not yet been fully developed. All others exist already on an industrial scale.”

A professor of civil and environmental engineering at Stanford University, Mark Jacobson, who was not involved with the study, said the proposed solar farms wouldn’t get to the root of the climate crisis.

“Some people think the only problem in the world is to reduce carbon dioxide, but that’s not the problem,” he said. “The problem is air pollution, energy security, and carbon emissions. You have to solve all three of those problems together. This is a solution to a very narrow aspect of the problem, so to me, the idea is misplaced.”

Peter Edwards, Professor of Inorganic Chemistry at the University of Oxford, UK who was not involved in the research, said although the science behind the study was sound, the technological hurdles are huge to overcome. He told to Newsweek that while the authors recognize and acknowledge this to an extent, “I think the challenges extend way beyond what they see, not least the question of how the materials—solar panels—will survive in the ocean environment (chemical and physical), and how the petrochemical plant would really work at the desired scale with the type of maintenance required on an off-shore platform.”

See also  A Week Devoid of Coal-Fired Power: Britain Makes It Possible For The First Time Ever Since 1882

However, the proposal should not be discounted according to Edwards “as long as reputable scientists and engineers are engaged to address the real issues.”