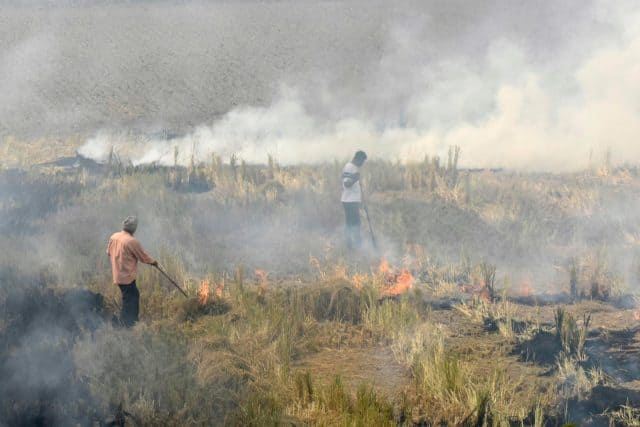 For Delhi’s smog, poor north Indian farmers and their practice of crop fires are held responsible, for which farmers think they are scapegoats for a broader problem.

Around tens of thousands of farmers in northern Indian states of Haryana, Punjab and Uttar Pradesh used to blaze their fields of old rice crop stubble to grow wheat. The practice was banned as it contributed to the mounting pollution crisis in nearby Delhi and across northern India. The absence of equally cheap and easy alternatives for preparing the fields prompted the farmers to continue the practice and to flout the law.

Delhi became a state of crisis this week for its record-breaking pollution, and the city was covered in thick brown smog with toxins more than 50 times the levels deemed healthy. Crop burning was labeled as the chief culprit, which is, according to the government environment agency is caused by almost 50% of Delhi’s pollution. Crop burning began in late October and is due to continue for the rest of the month.

“Burning is very common, everyone around here does it and just ignores the laws,” said Satish, who claimed only to be looking after the blackened land, though neighboring farmers later confirmed he was the owner.

Over 5,000 crop-burning fires were registered on Wednesday in Haryana and Punjab in a single day and exceeded 10,000 over the week. The state governments are keen to keep the large voting bloc of farmers on the side and therefore enforce the law loosely. While a few farmers in Haryana and Punjab had to pay fines, and some carry out the burning under cover of darkness, but most of them had been mainly left undisturbed.

Justice Arun Mishra, at the Indian Supreme Cjourt on Wednesday, reprimanded the chief ministers of Haryana, Punjab and Uttar Pradesh for their failure to tackle the problem, and ordered them to give financial incentives to farmers who had not burnt their fields. “Punishing poor farmers for burning stubble is not a solution,” said Mishra.

Farmers across Haryana remained defensive about their role in the pollution crisis of northern India, arguing they have been scapegoats for a much broader problem and at the same time, expected to adopt more expensive methods and machinery, without any support from the state or national government.

In recent years the problems caused by crop stubble have worsened as combine rice harvesting machines now leave several inches of stubble in the ground, which was previously used by farmers for cooking, as hay for animals or even as extra insulation for homes. However, that is increasingly outdated.

“I have been burning my crop stubble for the past 25 years,” said Sultan Singh, 59, who had burned his seven acres 15 days earlier. “And even if I have to pay a penalty, I will still burn because it is the only way to get a good harvest and I can’t risk my crops suffering. The government asks us to change our ways, to buy this machine that costs 3m rupees or use methods that are slow, where we make a loss, but then gives us no support or subsidies to help, so nothing is going to change. And people here are already very set in their ways.”

“Farmers are not responsible for this,” he said angrily, pointing towards a nearby factory chimney which was emitting black fumes into the hazy atmosphere. “Look, there are factories pumping out pollution all around us here, all day and all night, all year, whereas we are burning the fields for just a few weeks. They are the ones making the air dirty. But they are not about to shut down the factories, so they need someone to blame.”

Ratam Mann Singh, the Haryana state president of the Indian Farmers Association, was equally damning. “The government is humiliating the farmers, when they have no alternatives,” he said.

The month-long crop burning has coincided with the worst level of pollution across northern India once again this year. The colder weather that traps the toxic smog over the region has a poisonous environmental impact.

Dr Rajinder Singh, the president of a Haryana NGO promoting agricultural science, said that, in the long term, crop burning is detrimental to farmers as it is “destroying the nutrients in the soil.” He added: “The pollution in Delhi is a secondary issue. Farmers need to be given a viable alternative to crop burning because their own health is suffering the worst from this.”

“For the past couple of years this issue has affected everybody’s life in north India, not just in Delhi,” said Pandey. “The farmers have been facing a lot of negativity, but it’s not really their fault. They face practical challenges of having a very limited timeframe between one crop [and] another, and thanks to the GM crops the cultivation cycle has shortened, so it’s the government who needs to provide other options and financial incentives to stop stubble burning.”

The shift in behavior across the region noticed. Shubash Chand, 60, who has been a farmer in Haryana all his life, stopped burning his fields two years ago after he was charged a 14,000-rupee fine. “But it is a lot more difficult and more expensive for us now,” Chand said with a sigh.

As per Satish Kumar, 39, 42 people in the surrounding area had been charged fines after they were caught burning their crop stubble, but the enforcement was rife with corruption, he said. “If they catch you burning your 10 acres of land, they will only fine you for five acres, but then you have to pay them a bribe, which they pocket themselves,” said Kumar.

“People are burning their fields as much as they have always done,” added Raju Dahaya, 39. “Of course it is better for pollution if we stop. Even if we are disturbed and affected by it, we have watery eyes and breathing issues, but what can we do? But it is not us in isolation. The chief minister of Delhi does not want to deal with the problem of cars and construction, so that’s why he is putting all the blame on us.”