What is Sewage Sludge Treatment?

Sewage sludge is the residue produced by wastewater treatment processes. It is a residual semi-solid material, produced as a by-product when industrial or municipal wastewater is treated. As it is a by-product of treated wastewater, it has to be treated so that it is managed and disposed of. The sludge contains both organic and inorganic materials, as well as a large concentration of plant nutrients and pathogens.

Treating the sludge reduces its weight and volume, at the same time reducing its disposal costs and potential health risks on land, plants, humans and animals. Here are some more details about the sewage sludge treatment process, what is done with sludge from a sewage treatment plant, if sewage sludge is hazardous waste, and the difference between sewage and sludge. 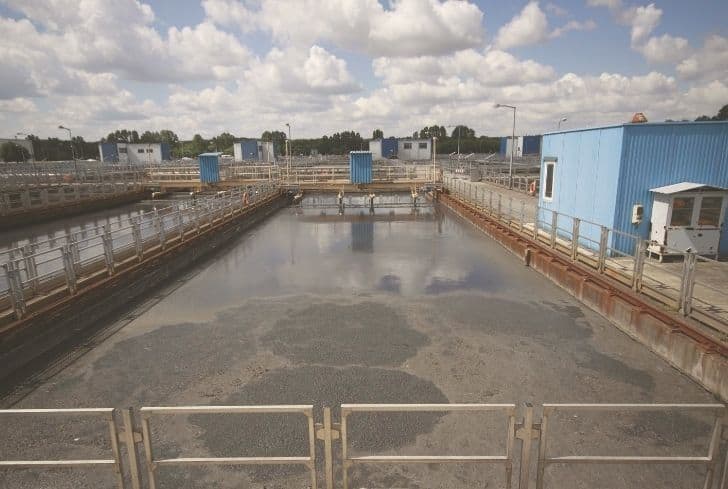 This is the first step whereby the sewage sludge is thickened in a tank called a gravity thickener. The process reduces the sludge’s overall volume and also enables its easier handling. Thickening is introduced first as it is impractical to handle thin sludge, as they are a slurry of solids suspended in water.

In the process of thickening, the total volume of the sludge is reduced to less than half its original volume. Alternatively, sludge can be thickened through dissolved air floatation, where air bubbles carry the solids to the surface where a thick layer of sludge forms.

In this process, all the amassed organic solids are decomposed into stable substances. This process further reduces the total mass of the solids, destroys any pathogens present and makes it easier to rid the sludge of its water content.

Sludge digestion is a two-way process. The first stage sees the dry solid sludge heated and mixed in a closed tank for several days, enabling anaerobic digestion by acid-forming bacteria. The bacteria in the process hydrolyzes the large molecules of proteins and lipids that may be present in the sludge, breaking them down into smaller and water-soluble molecules, which they then ferment into fatty acids.

Afterward, the sludge flows into a second tank where other bacteria convert it, producing a mixture of carbon dioxide and methane gases. The methane, being combustible, is then collected and reused to power the first digestion tank as well as generating power or electricity for the plant, depending on the quantity retrieved.

With the useful gases and other by-products retrieved, the remaining sludge is dewatered before finally being disposed of. Dewatered sludge, in most cases, may contain up to 70% water, despite its solidified state, and as such, it is necessary to dry and dewater the sludge beforehand.

Even with that moisture content, the sludge behaves as a solid and can be handled as a solid material. The most common and simplest method of dewatering is using sludge-drying beds. The slurry is spread on an open bed of sand and is allowed to remain until it dries.

However, this process is time-consuming, using up to 6 weeks to complete. The sludge cake may have a solids content of about 40% and can be removed from the sand with a pitchfork or front-end loader. To reduce the amount of time consumed or when dewatering during wet seasons, a glass enclosure may be built over the sand beds. Also, to quicken the process, waste management plans are employing solid-liquid separation devices.

The centrifugation, for instance, is becoming one of the most preferred methods of dewatering sludge. The sludge is passed through a centrifuge and it is easier to retrieve all the water and handle the solid waste in a shorter duration and at reduced costs.

The rotary drum vacuum filter and the belt filter press are other alternatives. These three alternatives, however, have to be usually proceeded by sludge conditioning, where chemicals are added to the liquid sludge to coagulate solids and help in draining.

This is the last step and involves the sludge being buried underground in a sanitary landfill or spread on agricultural land, adding value to the soil as a conditioner or fertilizer. As sludge may contain industrial chemicals and toxins, it is not recommended to be spread on land where crops are grown for human consumption.

Sludge may also be incinerated where land for disposal is unavailable, like in urban areas, or where the sludge is too toxic to be buried or reused. Incineration evaporates all the moisture and converts the organic solids into inert ash, which can then be disposed of.

Despite incineration reducing the volume of the sludge and making it economical, it could result in air pollution, meaning appropriate air-cleaning devices like scrubbers and filters have to be used. Dumping the sludge in the ocean used to be an economical method for many coastal communities, but is no longer considered due to continued pollution of the ocean waters.

What to Do with Sludge from a Sewage Treatment Plant?

Easily, treated sludge is buried in a landfill, saving one from waste-dumping costs. It also prevents the further release of pathogens or pollutants available in the sludge. However, there are concerns that landfill disposal leads to methane gas production, adversely affecting the environment. Also, the toxins could contaminate groundwater and surface water.

For sludge that contains toxins or cannot be buried because of the lack of a landfill disposal area, and an incineration is an option. It destroys all pathogens, reduces the material into stable ash and decomposes most organic chemicals.

See also  What is Environmental Sustainability and Sustainable Development?

However, incineration releases carbon dioxide and other greenhouse gases and volatile pollutants like mercury, cadmium and lead that pollute the environment, which could also worsen the effects of global warming.

3. Application on Land as Fertilizer

Applying treated sludge on land returns organic matter and nutrients found in the sludge back to the soil so that it can be used by crops, as fertilizer. However, the sludge has to be free from toxins, otherwise, it will affect the land, the crops, animals, humans and the environment in general.

4. Controlling Soil Erosions by Disposing it on Sloppy Lands

Sludge can be disposed of on sloppy lands where erosions are rampant. Eventually, it will work on landscaping the sloppy area and lower soil erosion.

The answer to this question is both yes and no. The Yeses and Nos to the answer are explained below.

Sometimes, sewage sludge waste is incinerated, because either it is too toxic to reuse or is harmful if buried, or has no place to be buried or if burying it will be too costly. If incinerated, all that will be left is ash which has to be disposed of and might contain heavy metals and other similar components. Moreover, the combustion of the wastewater plant sludge continues to raise air pollution questions, which might be of similar consequence to the environment as if it were not incinerated.

If sludge was treated but remains harmful, no one knows for how long those toxins will affect the piece of land, if the treated but harmful sludge is buried. It is still not known if the toxins will emerge on land despite being buried. The toxins can also leach into underground rivers and sources of water, like boreholes.

3. If applied on land

The sludge is treated to control its toxicity and sometimes, some harm might still be caused by the treated sludge. As such, it should not be applied to land with food grown for human consumption.

If applied, it will affect the plants and we will end up consuming such toxins and no one knows what they will do to our bodies. Additionally, the toxins might also affect other plants, animals and might be carried away, severely affecting the environment.

1. If applied to agricultural land

If it has been treated properly and no toxins are present, the sludge can be applied to agricultural land as fertilizer, boosting the productivity of the land and benefiting the soil. It is a better variety of fertilizer than the compounds bought from stores and used for similar purposes.

2. If used to control soil erosion

Where the sludge is well treated and is safe, it can be used for controlling soil erosion. The sludge can retain more water and can hold more soil, making it ideal for sloppy areas, where soil erosion is common.

3. If used for landscaping

After the sludge is applied on land, it becomes part of the land with time and helps with landscaping, rather than getting soil from other locations for the same purposes. The nutrients in the sludge will provide room for the accelerated growth of plants and can help in reforesting an area.

4. If used for domestic purposes, especially for cooking, heating, and lighting

Where sewage sludge is treated properly, especially through anaerobic methods, it can be used in homes for heating, cooking, and lighting. The anaerobic process produces, among other gases, methane, carbon dioxide and hydrogen, otherwise known as biogas. The biogas is useful fuel for cooking and can also be converted to produce electricity and heat for the home.

Difference Between Sewage and Sludge?

1. Definition: Sludge is a generic term for solids separated from suspension in a liquid. Sewage is a suspension of water and solid wastes, transported by sewers, to be processed or disposed of.

2. Constitution: Sewage are liquid wastes that contain dissolved and suspended impurities, whereas sludges contain solid wastes like feces, vegetables and other wastes

3. Where it is gotten: Sewage is a combination of kitchen, bathroom, toilet and other domestic or even industrial activities. Sludge, on the other hand, is the composition of dead bacteria, that accumulates at the bottom of a secondary clarifier tank after prior stages of treatment. The sludge is then treated in the processes outlined above, before finally being used as manure

4. Usage: Simply put, sludge can be used as manure, but sewage cannot

5. Density against water: Sewage is what comes down a pipe and mixes with any water present. On the other hand, sludges are the solid parts of the sewage, meaning they are heavier than water

6. Alternative names: Sewage can also be called wastewater, while sludge can be referred to as biosolids.

7. Treatment: Both sewage and sludge are treated in four stages. Sewage undergoes screening to remove large contaminants from the water, primary treatment to separate human waste from the sewage, secondary treatment where wastewater is put in larger tanks to break down the tiny sludge and bacteria that might inhibit wastewater, and final treatment, where the treated water goes through a settlement tank, and sludge, chemicals and bacteria are removed from the water, making it safe to flow back in rivers.

Sludge is thickened, making it easier to handle, is taken through the digestion process to help decompose it into stable substances, it is then dewatered and finally disposed of in landfills or on land as fertilizer.