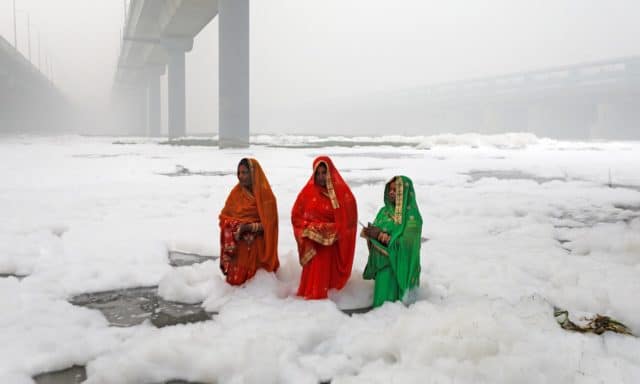 The day of Chhath Puja, which is an auspicious occasion of the ancient Hindu festival, was the most polluted day of Delhi in three years. Thousands of women gathered in the waters of the city’s Yamuna River as they had to immerse themselves in the thick toxic waste and inhale air, highly thick with smog. The irony is that on a ceremony that is believed to bring good health and prosperity, air pollution levels went off the charts, and public health emergency had been declared.

The toxic foam of the Yamuna was so thick and frothy due to industrial and domestic pollution that it made the water resemble a putrid bubble bath.

“I stood for an hour in the water to offer prayers, but it was very oily, dirty and had a bad smell,” said Sunita Devi, 42, who was among those who offered prayers. “According to the ritual we are supposed to bathe in the water but I could not bring myself to do it fully, though my friends took a full dip even with the smell. My legs were itching after a while and I had to go home and take a bath.”

The air pollution levels deteriorated severely since the Hindu festival of Diwali and reached catastrophic levels of almost 10 times above the healthy limit on the weekend. For the past five days, there was a public health emergency. As the air quality index remained fixed in the category of “severe,” the streets have emptied, schools remained closed, and many skipped work on Monday morning. Each one of 20 million citizens of this world’s most polluted city was, therefore, got affected.

A scheme was temporarily introduced on Monday whereby cars with odd and even number plates can only drive on alternate days. The scheme ran previously in 2016, and as per authorities, it will take 1.2m cars off the Delhi’s roads daily. However, the plan that will remain effective just for two weeks makes most in the city feel highly skeptical about it.

“They did this scheme twice before, and it is pointless,” said Amit, a driver. “I am not supposed to be taking my car out today, but I am just taking the back roads and short cuts to avoid the traffic officers. All the other drivers I know, are doing the same. Yes, pollution is a terrible problem, I have had an awful chest infection for the past two days because of it, but this temporary scheme is not going to change anything. We need real action from the government.”

Due to widespread poverty and homelessness in a city such as Delhi, millions make shelter on the sides of the roads other than homes, and few have the option of driving cars equipped with air purifiers.

Dinesh Raj of Kamla Nagar, North Delhi, who sells chickpeas at his stall on the roadside, said both his health and business was suffering. “I generally earn around 400 to 500 rupees per day but after the bad pollution I have only sold three plates and it’s already lunchtime,” Raj said while rubbing his eyes, which he complained were burning.

“People are not coming out of their houses anymore, only those like me who cannot afford to stay indoors are here. And even though I cover it up, people are afraid to eat my food because they think the bad air is affecting it. If the government doesn’t do something to clean up the air, I am going to have to go back to my village in Bihar.”

The burning of the crop stubble has been a critical contributor to the thick toxic smog of Delhi. The poor and uncoordinated response of both the federal government and state governments of Delhi and neighboring Punjab and Haryana to the crisis enraged the city’s residents.

Navdha Malhotra, campaign director for Purpose, a social impact agency who run a mobilization campaign called Help Delhi Breathe, spoke of her anger that the state governments were “all passing the buck and blaming each other while we have to live in this disgusting layer of smog.”

“As a citizen of Delhi who has lived here all my life, this is absolutely disgraceful,” she said. “The Delhi government is very progressive in terms of policies on paper but there is zero implementation and no political will on this issue. People are angry and mobilising, particularly parents who now feel like they can’t let their children go outside, but overall civic action here is also pretty disgraceful. I have seen citizens in Delhi bursting firecrackers while wearing masks.”

On the weekend, the smog was so brown and thick that it made it almost impossible to see more than a few feet ahead, and India’s health minister Harsh Vardhan tweeted to eat carrots as a good solution to offsetting its harmful impact. Sunil Bharala, minister, state of Uttar Pradesh, meanwhile, defended the practice of crop burning by farmers, declaring it a “natural system.”

Arvind Kejriwal, Delhi’s chief minister, has been frank about the problem, calling the current pollution crisis unbearable while also been criticized for passing the blame for the problem on to adjacent states.

Ever since the state of emergency was declared in Delhi on Friday, firecrackers were banned, and construction has been halted, which was not actually enforced in reality. The Supreme Court judges slammed all authorities responsible on Monday for failing to tackle the pollution crisis in the capital, saying that people had been “left to die.”

“No one is safe, even inside homes. It is atrocious,” the judges added.

Malhotra condemned the Board for Control of Cricket in India (BCCI) for scheduling a match against Bangladesh in Delhi when the pollution levels were off the charts. “We should not be normalising these conditions by doing things like hosting a cricket match,” she said. “It is deathly, and when pollution gets that bad, the whole city should be shutting down. Only then will politicians take this seriously.”

To avoid the increasingly harmful impacts of severe pollution, people are wearing masks on their faces when they are out in the streets of Delhi. A protest of citizens is also planned at Indian Gate on Tuesday evening to mark the growing public outrage and decry the lack of action by authorities.

But for many like Kushal Malik, a Delhi traffic police officer, there was no choice but to inhale the fumes, who had spent the past 12 hours on duty on one of the busiest and most polluted roads of the city with thick poisonous smog. “I have constant throat irritation, headache and a burning sensation in my eyes,” he said. “The government has provided us with masks but they are not effective for pollution levels this bad. It is not good enough.”