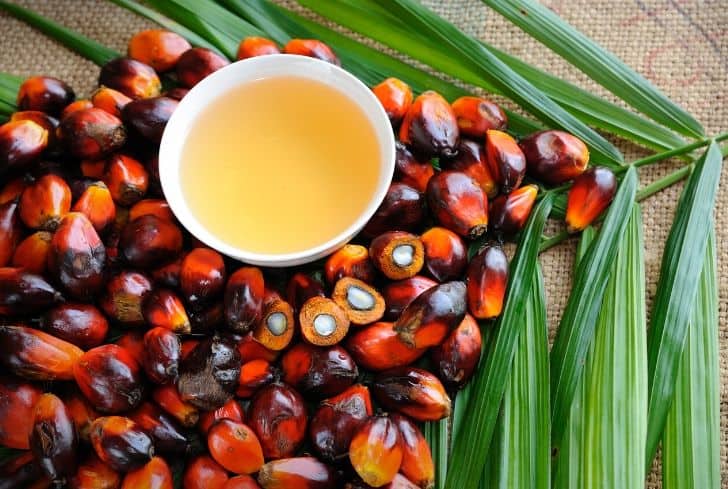 Palm oil is a popular edible vegetable oil that is nearly in everything from doughnuts to chocolate, among other household products like shampoo, deodorant, lipstick, and toothpaste. In fact, due to its versatility, almost 50-percent of packaged things people buy in supermarkets have palm oil.

What is Palm Oil?

The palm oil is harvested from the fruit of palm trees, also scientifically known as Elaeisguineensis. The palm oil can be sourced from squeezing the fleshy fruit or crushing the stone in the middle of the fruit. Palm oil trees are native to Africa, but they are popularly grown in South-East Asia with Malaysia and Indonesia making up over 85-percent of the global supply.

Deforestation for palm-oil production also contributes significantly to climate change. The removal of the native forests often involves the burning of timber and remaining forest undergrowth, emitting immense quantities of smoke into the atmosphere.

Why So Much of Palm Oil is Required?

You can find palm oil in every other product you consume. Palm trees can proliferate on any type of soil, and the palm oil fruit is harvested all year round, giving the highest yield per acre, for example, palm fruit produces eight times more oil than soybeans. It is a key component in almost every industry.

The palm oil is extremely versatile. It is also resistant to oxidation, which explains its use in most products to help prolong shelf life. The oil is also colorless and odorless, which explains why most bakers prefer it over other alternatives as it does not change the smell or look of the food.

In addition to being used as an ingredient in most products, palm oil is also widely used as cooking oil and even contained in animal fodder. It’s healthier compared to other vegetable oils.

Semi-solid at room temperature, the palm oil also remains stable at high temperatures. It is the reason why it is extensively used in fried products. It has an ideal melting point to be used in cosmetics such as lipsticks and create foam in shampoo.

As a sustainable alternative to fossil fuels, it is used to power cars in the form of biofuel and also known for producing heat and power.

’10’ Great Reasons Why Palm Oil is Bad For the Environment

There is a common trend of deforestation in all areas where palm oil is currently being grown, from Indonesia to Papua, Malaysia, and New Guinea.

In Malaysia, for example, the deforestation rate is equivalent to 30 football fields disappearing every minute of every day in 2018, or a total of 120,000 square kilometers, with the Sarawak area experiencing the highest rate of deforestation of about 8-percent.

Research has also found that forests disturbed by severe drainage or logging are not stable and are likely to experience a further change after the initial interference.

The increasing demand for palm oil has, therefore, contributed to the expansion of palm oil plantations resulting in the destruction of tropical forests to accommodate new plantations.

The new younger palm oil trees absorb more valuable nutrients from the soil, which degrades the quality of the soil, and there is depletion in nutrients, and consequently, there is a lower level of remaining nutrients for other trees.

The close distances between trees designed to optimize the use of the limited space available have further impacted soil quality.

As there is a limited supply of nutrients to meet the requirement of trees, fertilizers and pesticides are used in large amounts to ensure rapid growth and the health of each tree, which further harms the state of the soil and makes it challenging for existing flora and fauna to survive in the area.

Soil erosion and poor soil quality have also caused damage, affecting the livelihoods of local villagers living close to these palm oil plantations. It is primarily because they can no more fully depend on their land henceforth for the cultivation of food and timber.

3. Ecological Impacts including Loss of Biodiversity and loss of Natural Habitats

The massive and rapid expansion of palm oil plantations has led to the loss of biodiversity and the degradation of natural habitats.

The change of land use from forest to palm oil cultivation causes several consequences that include increased erosion, increased risk of fire, and pollution that threatens the survival of both plant and animal species. There is also more likeliness of soil subsidence due to fires and drainage.

The soil subsidence is also associated with the increased likeliness of saltwater intrusion and flooding.

Furthermore, the growing palm oil fields are reported to have the potential of leading to increased use of herbicides, insecticides, and fertilizers that can enter water bodies through groundwater seepage or runoff, which in turn vastly affect aquatic biodiversity.

The increased use of herbicides, insecticides, and fertilizers due to the ever-increasing palm oil plantations has the potential of resulting in the seepage of the agrochemicals into groundwater and the subsequent contamination of domestic water. It can cause various health risks, such as certain types of cancers, growth problems, and reproductive disorders.

The cutting down of forests and the harvesting of peats, which serve as natural carbon sinks, can also heighten the formation of ground-level ozone that can negatively affect the health of people by increasing the risks of bronchitis, asthma, and lung cancer.

Although the growth of palm oil will likely lead to increased income in households, the long-term impact of palm oil can be detrimental to indigenous societies.

It is because most of them depend on the forest areas that are converted into pail oil plantations for their survival and livelihood. The changes in the use of land from farming crops to palm oil cultivation will also likely lead to instability of food prices as overall crop cultivation reduces.

The increased flooding as a result of global warming can also wash away the nutrient-rich topsoil and hence causing a decline in crop yields.

Accordingly, the declining yields may push farmers to use expensive fertilizers, which further reduce profitability. Also, with big multinationals looking for more land to cultivate the plant, there are increasing cases of community displacement due to illegal land grabs or forced relocation.

Forests store large amounts of carbon in vegetation and peat, and this, therefore, means that the change in land use and the burning or clearing of plantation cover increase carbon release into the environment. It occurs when farmers expand their farming areas by converting forests into large scale palm oil plantations.

In the process of clearing forests to create space for palm oil farmland, the living biomass is destroyed, causing a decrease in natural carbon sinks and a subsequent increase in net carbon on the planet. Increased carbon emissions are a recipe for global warming and climate change.

Methane is formed by methanogenic bacteria living in the anaerobic peat layers that are saturated with water from gaseous or organic carbon compounds. In the more oxic peat layers, the methane is oxidized into carbon dioxide that plays a vital role in ensuring carbon balance.

In as much the amount of methane produced from tropical forests‘ peat is negligible, the change in land use can cause raised soil temperatures that stimulate the process of methanogenesis.

Furthermore, the presence of flooded areas and drainage canals due to palm oil cultivation can promote the emissions of methane.

Considering that, the warming potential of methane is 25 times that of carbon dioxide, even a slight increase in methane emission can be highly damaging as it can increase the global temperatures significantly.

Cutting down forests puts many animals at risk of poaching. The tropical forests, considered the ideal areas for palm oil cultivation, are home to many plant and animal species.

The tropics in Southeast Asia are considered the most biodiverse forests with high levels of endemism, including the endangered fauna such as Sumatran tiger, rhinoceros, Asian elephant, orangutan, and birds of paradise among others.

The change of land use from forests to palm oil farming in such forest areas has been reducing the habitat quality and coverage areas, thus increasing the rate of species extinction.

Orangutans are a prime target for expanding palm oil operations as they live high in the forest canopy, and their habitat needs to be destroyed. The rapid decrease in the number of great apes has been directly linked to palm oil.

The number of endangered Sumatran and Bornean orangutans reduced to half in Borneo between 1999 and 2015. About 1000-5000 orangutans are killed each year due to palm oil cultivation in Indonesia and Malaysia.

A century ago there were probably more than 230,000 orangutans in total, but the Bornean orangutan is now estimated at about 104,700 based on an updated geographic range (Endangered) and the Sumatran about 7,500 (Critically Endangered). [Source]

Greenpeace has identified food giant Mondelez, the Cadbury chocolate maker, who is responsible for destroying 70,000 hectares of the habitat of these great apes since 2016. The destruction of the forests not only ruined up to 90 percent of their homes, but they are even sometimes actively killed by the people involved in the industry.

Palm oil cultivation has been proven to cause major pollution to the water bodies in the adjacent areas. Such pollution can occur during the clearing of the land for the establishment of the farm, when agrochemicals are released through leaching and runoff, or due to the discharge from the palm oil mills.

Studies have also shown that streams that drain through the palm oil plantations tend to have physical, biochemical, and hydrological alterations that are different compared to the rivers that flow from the forest.

The discharges from palm oil mills also tend to have high chemical content that ends up contaminating neighboring water systems, including groundwater.

What Can You Do to Help?

Palm oil is so pervasive that it can be difficult to avoid. Brands often name it differently in their ingredient lists, such as “vegetable oil” or “vegetable fat” as they understand that people might be trying to avoid palm oil.

Some palm oil also certified as sustainable, the production of which has been deemed socially and environmentally responsible. Consumers can look out for their label on products, and purchase products made with palm oil deemed sustainable.

Non-government organizations have urged many of the world’s biggest companies to sign global commitments to drop using “dirty” palm oil. As firms have been accused of sticking to the most basic requirements for sustainability only, there is much skepticism about how effective these measures have been keeping forests still at risk.

Consumers can play a vital role as they can put pressure on the companies by petitioning to change to the palm oil production process that does not harm some of the most precious ecosystems on Earth.

However, boycotting palm is not the solution. There is also the need to create alternative income solutions to palm oil that humans do not damage the forests.

Palm Oil: Uses and Side Effects

Things to Know About Palm Oil

Is Palm Oil Good For You?